June 18 marked the second mobilization under the banner “We Are All Barillas” in the department of Huehuetenango, Guatemala. Hundreds of community members, indigenous leaders and supporters from throughout the region traveled seven hours outside of the department’s capital to declare that the community of Santa Cruz Barillas would not be intimidated.

Only one month earlier, Barillas had been under a state of martial law. The municipality of mostly Maya Q’anjob’al people in Northwestern Guatemala has been a site of social conflict since 2010, when the government issued a license to Hidro Santa Cruz, subsidiary of Spanish-owned company Hidralia Energy, to build the Cambalam hydroelectric dam. The project was authorized despite the municipality’s decision — made on June 23, 2007 — not to allow the exploitation of natural resources by foreign companies. Then, on May 1 of this year, community leader Andrés Francisco Miguel was assassinated and two others were injured in an attack allegedly carried out by two agents of the company. Barillas quickly became a national example of the government’s new “iron fist” policy when the president declared martial law in Barillas, asserting that the community had seized military weapons in response to the assassinations. Martial law suspended constitutional rights in Barillas, including freedom of assembly. The state issued 29 arrest warrants for community leaders and detained 17, sending 12 of them to a high-security prison in Guatemala City without a trial.

“Today there was an organized concentration of people affected by the state of martial law,” says Nelton Rivera of the organization Waqib Kej. “First we gathered in the main square, and then we accompanied the Committee of Victims in Barillas to the place where Andrés was killed.”

The Q’anjob’al people of Barillas, who suffered some of the worst state violence during Guatemala’s internal conflict, are once again resisting militarization. But today there is no armed insurgency to justify the repression, only a mass movement that is challenging the development model being imposed by the government and multinational corporations.

In the department of Huehuetenango, and in the Western Highlands generally, communities have put up resistance to the kind of resource extraction that has been taking place throughout the country. Faced with over 400 mining exploration and extraction licenses authorized by the state  between 2000 and 2004, and a national energy transformation plan that includes the construction of more than 47 hydroelectric dams, indigenous peoples have relied on a process called the consulta comunitaria de buena fe, or good faith community referendum, and their right to self-determination to maintain control of their territories and natural resources. 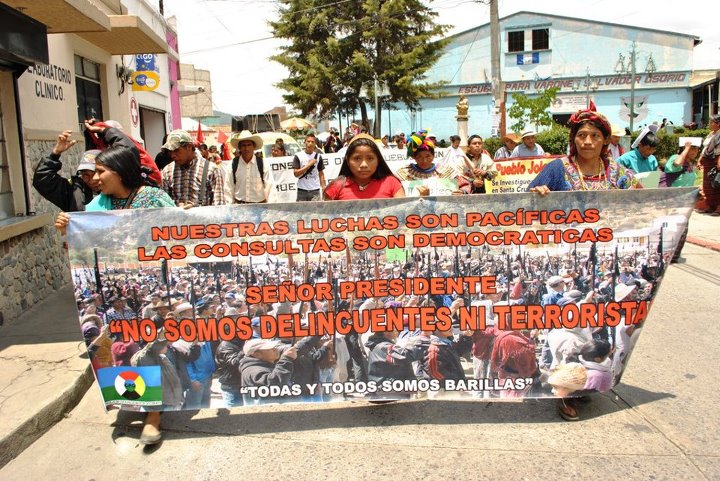 Women march in Santa Cruz Barillas one week after the implementation of martial law. Their banner reads: “Our Struggles Are Peaceful, Our Consultas Are Democratic: Mr. President, We are not criminals or terrorists. We are all Barillas.” Photo by the Independent Media Center-Guatemala.

Backed by international law — International Labor Organization’s Convention 169, the UN Declaration on the Rights of Indigenous Peoples and the Inter-American Democratic Charter  — as well as Guatemalan national and municipal law, communities have used their right to the consulta to indicate to the state and to the private sector that mining extraction and hydroelectric dams will not be permitted on their lands. Carried out through local organizing committees, and often with the celebratory spirit of a “civic party,” the consultas are public gatherings where men, women and children vote with the raising of the hand on the projects proposed in their particular municipality. In most cases, the municipal government issues an ordinance banning the activity and the legality of this ordinance then enters into conflict with the licenses authorized and promoted by the state.

In Guatemala, around 61 consultas comunitarias have been carried out since 2005, 28 of them in Huehuetenango. In 2008, Huehuetenango led the way by beginning to declare entire linguistic regions as Mining Free Zones, including the Huista, Chuj, Akateco, Mam and Q’anjob’al regions. While legal in nature, the declarations are also political tools on which to base the communities’ organized resistance to these territorial threats. After the victory of the consulta is achieved, it must be defended and enforced. They are the beginning, not the end of the fight.

When all else fails, work for autonomy

To many, the onslaught of resource extraction licenses in Guatemala represents the largest systemic threat to Guatemala’s indigenous peoples since the counterinsurgency of the 1980s. Faced with this, and the state’s blind eye, communities are looking inward.

“Communities are posing autonomy from the state … They are posing another way of administering local power,” explains Rivera. “The state has not responded to the word of indigenous peoples, but to a colonial power structure, by only guaranteeing the interests of national and multinational companies. Communities are understanding that if the state doesn’t work, they have to pose another alternative.”

The consulta itself, beyond a movement strategy, is an exercise in this kind of autonomy. It is an assertion of self-determination and the rights of indigenous people that is so fundamental to Guatemala’s anti-extraction movement. Self-determination is so central to this process, in fact, that when a bill was proposed in Congress to regulate the consultas comunitarias on a national level, the Consejo de los Pueblos del Occidente, or Western Peoples’ Council, opposed such regulation. (To read a full English version of the Western Peoples’ Council’s declaration on Barillas, click here.) For many, the consulta represents a revival of ancestral forms of decision-making, of participatory democracy and of identity as indigenous peoples.

Other forms of self-governance are emerging or taking on new life as part of this process as well. Many municipalities are reviving community authority structures, such as the Indigenous Mayoral Councils, or implementing their own justice systems. In some cases communities are promoting  alternative forms of economy, based in sustainable agriculture, to counter the extraction-based development model. Regional assembly bodies and councils have emerged, and in May of 2008 the Western Peoples’ Council was created; all of these spaces attempt to prioritize local leadership over political parties and large NGOs.

According to Rivera, a defensa del teritorio, or territorial defense, will rely heavily on the movement’s ability to create networks and connect these processes regionally and internationally, while continuing to defend the legitimacy of the consultas comunitarias through national and international legal strategies.

The case of Barillas and its 18-day state of martial law are pivotal for Guatemala. With a military government that took power just a few months prior, a controversial head of state whose role as a military general during the internal conflict has implicated him in accusations of war crimes and genocide, and a new “iron fist” national policy, for many, Barillas was a test of how the government would respond to social conflict in rural areas. The use of force and militarization was at best a glimpse of what’s to come, or, at worst, just the beginning. 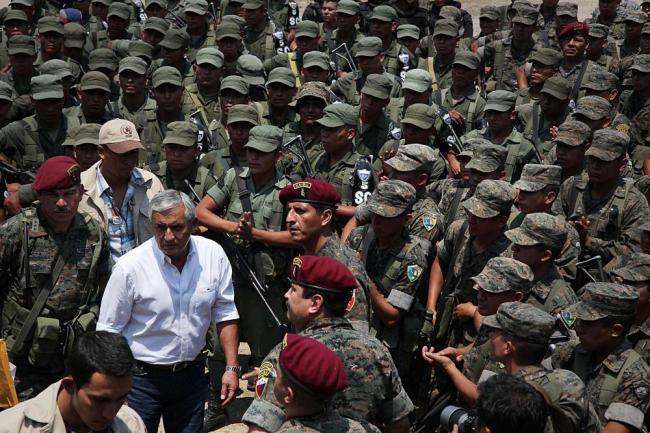 Given President Otto Perez Molina’s links to the counterinsurgency campaign of the 1980s, many have compared the events in Barillas to the wartime repression of the past. Guatemala’s 36-year internal conflict led to the killing of over 200,000 civilians and the forced disappearance of over 40,000. The relative isolation of rural communities from urban centers enabled extreme violence in Guatemala’s countryside to go on largely unnoticed.

But new tools and a new dynamic have changed the playing field in a way that the case of Barillas has made apparent. The Cold War has given way to a War on Drugs, in which social movement actors are often criminalized or accused of being narcos, making organizing particularly difficult in regions with high levels of drug trafficking. As everyday people working for change in the past were painted as communists, the Guatemalan government has painted community leaders in Barillas as members of terrorist groups and drug cartels. However, this criminalization to justify militarized repression was countered by a new generation of media activists using blogs, internet radio broadcasting and an online campaign called We Are All Barillas to denounce what has been taking place in the highlands of Huehuetenango. According to Rivera:

Alternative media played a very important role in the case of Santa Cruz Barillas. The government mounted a massive media campaign about organized crime and drug trafficking … It was the alternative media that was able to penetrate social networks and spread information different from what the mass media was publishing. They were able to establish two versions of what took place, the official version of the state and the alternative version, which came from the people … Not all mass media, but some began publishing the information and questioning the martial law because of internet pressure. The state was forced to explain why they didn’t suspend the martial law, but their arguments had no basis. So we saw that the communities and alternative media were able to force the government to break the estado de sitio just days after its renewal.

“Speaking of the former military men of this government being linked to past repression, so is the mass media,” explains Filiberto Celada of the Independent Media Center – Guatemala:

They’re the same ones who didn’t publish anything about the massacres. There are things that, for the media, simply aren’t happening, don’t exist. In that sense, alternative media is breaking through the silence and sending information abroad … The amazing thing about the We Are All Barillas campaign was the level of coordination between small groups of people.

In 18 days the martial law was lifted largely due to national and international pressure. The movement in Barillas and throughout the country has maintained its resolve as a peaceful and democratic movement. The challenges it faces now with a new administration and increasing militarization of the region will be met with more coordinated media strategies, autonomous organizing and a strengthening of regional unity between peoples.