Florida has been in the eye of many natural storms. The Sunshine State is now in the eye of a massive, man-made voter suppression storm. But instead of wringing their hands in despair, voters in Florida are organizing to make sure that youth, seniors, Latino and African American voters and all voters are able to exercise their democratic and Constitutional rights this November 6.

At the recent Take Back the American Dream conference, union members, youth activists and grassroots leaders from Florida gave hope that it is possible with hard work and single-minded determination to overcome the obstacles to voting rights in 2012.

A Communications Workers of America member from south Florida spoke of the battle with Republican Governor Rick Scott, who continued voter suppression activities targeting Latino and African American voters even after the Department of Justice said not to.

"My friend's father has been here since the 1930's. He became a citizen and has been voting for years.  He just got a letter saying he had to prove that he is a citizen or he would be dropped from the voter list," she said shaking her head.

He was one of over 500 in Miami-Dade County restored to the voter list after proving citizenship.

The CWA is holding meetings with its members across the state to discuss the issues and get them involved with candidates who will support working families. "I've met so many people here with amazing ideas to bring home," she said of the conference. "If we are all one we can win this uphill battle together."

The labor movement in Florida is not alone in mobilizing for a record voter turnout. Youth from the NAACP and from immigrant rights organizations also shared their approach to overcome voter suppression in Florida at the conference.

The courageous DREAMers, immigrant youth without documents, who risked everything and marched from Miami to Washington inspiring sit-ins and actions across the country, are now focused on organizing to get out the vote in November and for comprehensive immigration reform.

Gaby Pacheo, a leader of the DREAMers movement from Miami, took offense at those who dismissed President Obama's executive order ending deportations of DREAM Act eligible youth as an election ploy for Latino votes. "This is about the power of the movement the immigrant youth are building," she said.

Florida is one of 31 states which, at the instigation of the American Legislative Exchange Council (ALEC), funded by the billionaire Koch brothers, have adopted some form of voting restrictions.  Many of these laws are being challenged and some are being overturned.

In addition to new laws limiting early voting and restricting voter registration, Florida's governor ordered that voter rolls be purged on the faulty grounds that thousands of  non-citizens were on the rolls. The action was so blatant and extreme that the U.S. Department of Justice filed a lawsuit.

Last week Federal Judge Robert Hinkle denounced the attempt to remove voters from the rolls but did not order any action, saying the purge had been stopped. However the Brennan Center and the League of Women Voters called for continued vigilance.

The true nature of voter suppression and the ALEC laws was exposed when Pennsylvania's Republican House Majority Leader Mike Turzai openly bragged that voter ID  "is gonna allow Governor Romney to win the state of Pennsylvania."

Voter suppression and unlimited campaign funding are the relentless tactics of the 1% for even more expansive power and control of government to keep their profits on the rise.

"Voter suppression is about a power shift," Jotaka Eaddy, NAACP senior director for Voting Rights,  told a youth session at the Take Back America conference. "The 2008 voter surge was the most diverse in history. Our country's demographics are changing, and we are reaching out to new voters," she said, acknowledging the presence of two youth NAACP members from Florida.

As  attacks on everything won in the last century escalate, the conclusion is being drawn more widely in Florida, Pennsylvania and around the country that now is the time to stand up and join together if our nation is to reverse growing income inequality and the racial and gender divide and preserve: the right to vote, the right to a union, Social Security, Medicare, Medicaid, women's reproductive rights, environmental protection, public education and the Affordable Care Act.

Sen. Sherrod Brown of Ohio called for united action, saying, "The right-wing wants to depress the vote, keep big money in elections, and kill unions." He said that when Ohio voters collected 230,000 signatures to put a referendum on the ballot that would overturn repressive voter legislation, the Republican legislature and governor repealed Ohio's voter suppression law. They feared the referendum would bring Democrats to the polls.

"We are in the fight of our lives," Barbara Arnwine, executive director of the Lawyers Committee for Civil Rights, warned the audience during the closing plenary at Take Back the American Dream. The Lawyers Committee is challenging voter ID laws in 10 states including Florida.

"This is a purposeful effort to undermine democracy. Going forward we need everyone in this battle," she exclaimed. "We are determined. Let's believe the future is ours."

In Florida, Ohio, Pennsylvania and beyond, union, community and civil rights groups are preparing to mount an unprecedented neighbor-to-neighbor national conversation about the issues and choice of this election and to inform voters of their rights.

This is the only way to overcome the raging voter suppression storm and continue to stick together following the election for jobs and a sustainable and secure economy.

As Van Jones said in closing the American Dream conference, "It's in our hands. This fight is to preserve what our parents won, and bring us one step closer to the beauty of the dream." 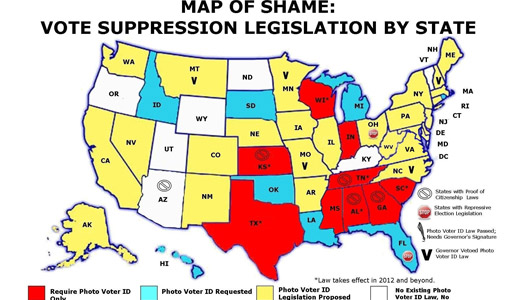 This article was originally published by People's World.