The Indypendent
Menu
A Free Paper for Free People
For someone who marched from Bowling Green to Zuccotti late the morning of September 17, 2011, the National Gathering of Occupiers in Philadelphia this July 4th weekend felt, if not like a coming full-circle, at least an opportunity to participate in a corpus-building – a resonantly democratic event which avoided any claim to speak for any particular Occupy, or the movement as a whole. Instead what was planned was more an academy of consensus and boot camp for practical action.

To that end, motivated individuals from around the nation converged on Independence Mall in Philadelphia on June 30th. Over 100 Occupations from 40 states voiced their solidarity and tried to sent along a representative contingent. I even met a young man, "Danny," an Indignado from Madrid, and a group caravaning from Montreal to show their solidarity. They came for a 5-day event highlighted by direct action, symbolic marches, working groups, and Occupy-style entertainment.

Wells Fargo Gymnasts:
Envisioning of the gathering was open to the public  via the internet, thanks to Open Assembly – , and the schedule was posted in its entirety on the National Gathering website.
It was in this spirit of good faith and honest aspirations that occupiers found themselves entangled in the following scene:
At the sight of tents erected in the unnamed National Park property dubbed "Bank 2," the United States Park Police, with some reinforcement from the National Park Service Rangers and Philadelphia Police Department, turned vicious in effecting the shelters' removal and prevention of Occupy activists further colonization of the park. 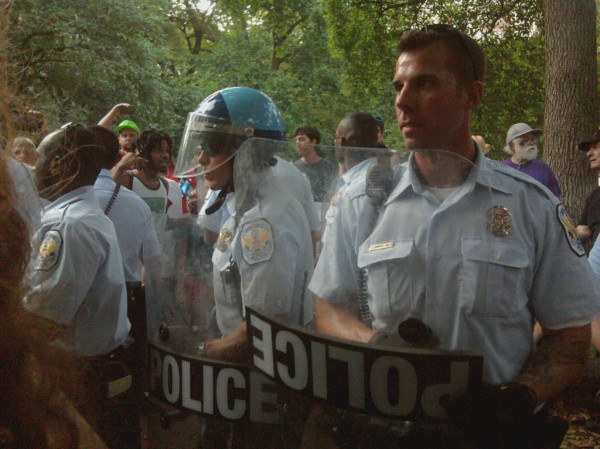 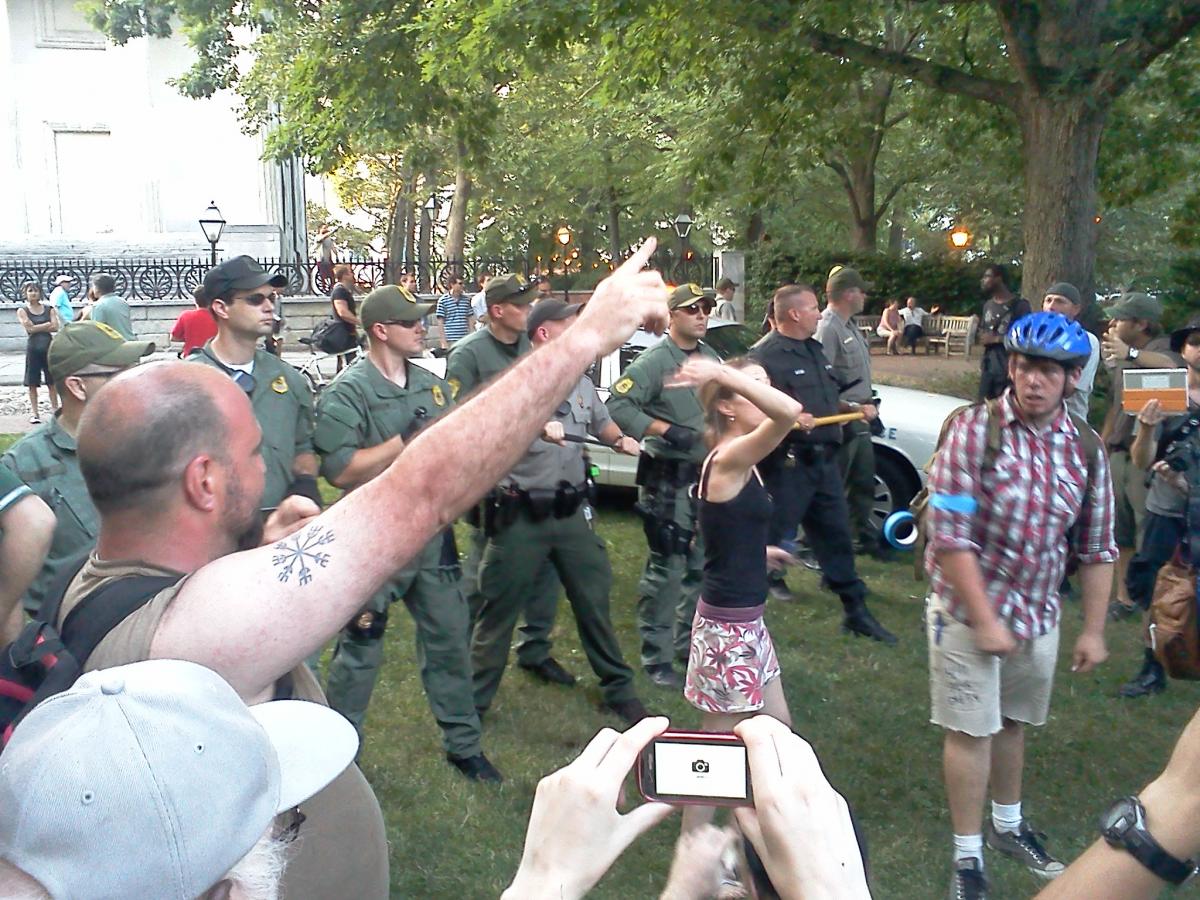 In the above picture, organizers Lisa and Tim from Philly stand between Park Rangers and protesters at "Bank 2." The black-clad officer on the right is not a Ranger – GATE USPP Officer Dave "Cowboy" Moen, by several accounts the most ardently violent of the law enforcement on scene.
The conflict resulted in a reported injury to a Park Police officer, and the arrest and charging of one protester with Aggravated Assault on a Federal Officer (according to a source in the Occupy Philadelphia Legal Collective the young man faces serious penalties). 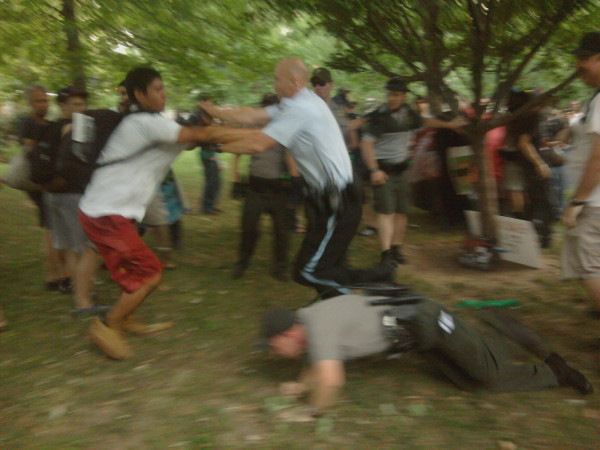 The incident was consistent with interactions between representatives of the United States Park Service and Occupy activists since they began to gather in the already baking open field of Independence Mall at 9 a.m, in front of Constitution Hall, flanking the Liberty Bell. Activists from around the country massed slowly throughout the day, with organized Caravans and independent pilgrims arriving in staggered clusters. 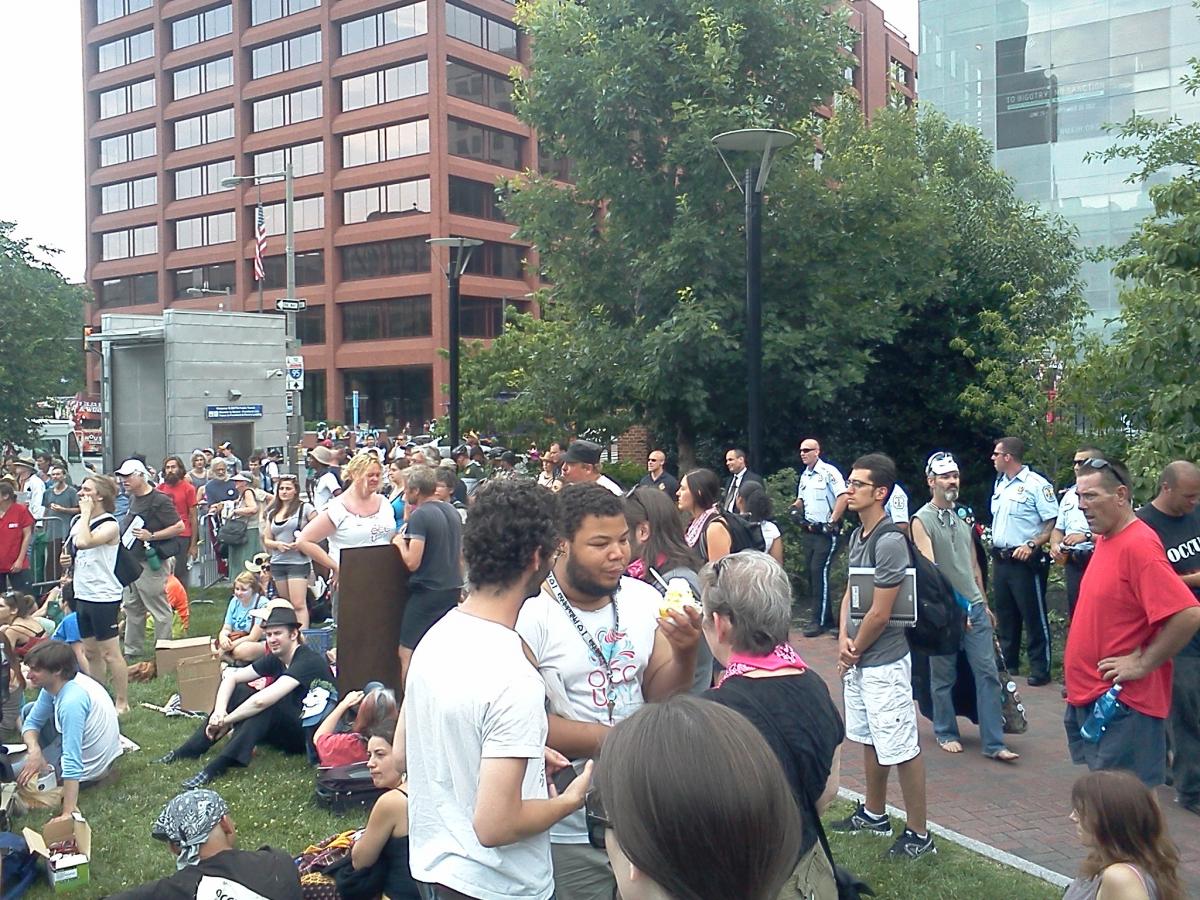 From the arrival of the first sign larger than a few square feet, Park Rangers (as well an administrative representative from the Department of the Interior with whom Occupy Philly activists dealt in April) enforced a zero-tolerance policy of permitted behavior on National Park property, which included the laughably-overreaching inclusion of a sign in the category "structures," even when the sign was being held by two Occupy attendees. 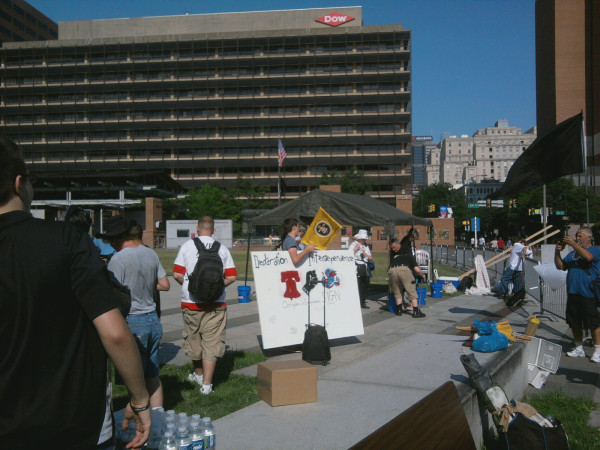 The sign above, for example, was deemed a "structure" by the administrative representative from the Department of the Interior.
After a struggle to coalesce at the Mall in the face of such stubborn tactics on the part of the National Park Service, the assembled Occupy National Gathering embarked on an energetic march against Wells Fargo's predation of school funding, mendacious corporate media, and fraud and malfeasance in mortgage lending. 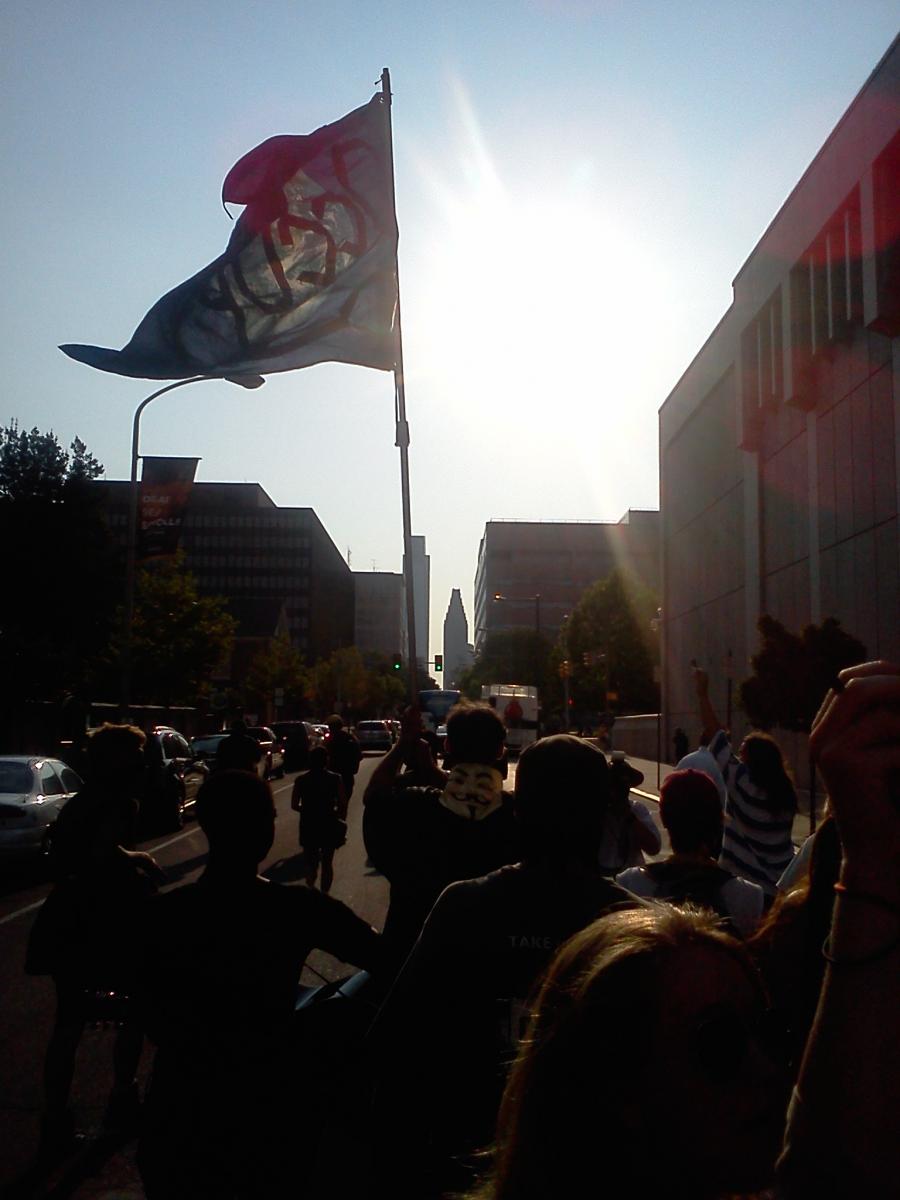 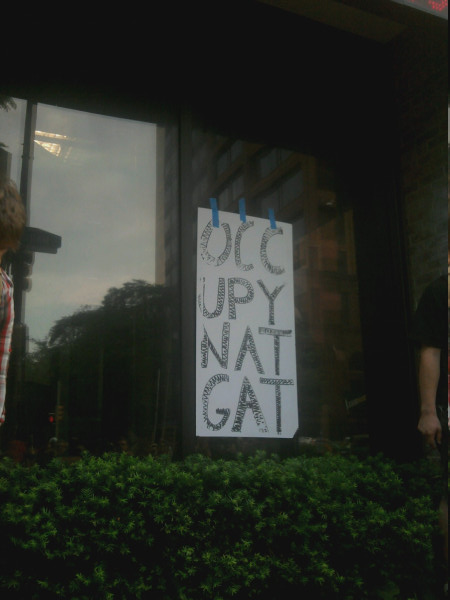 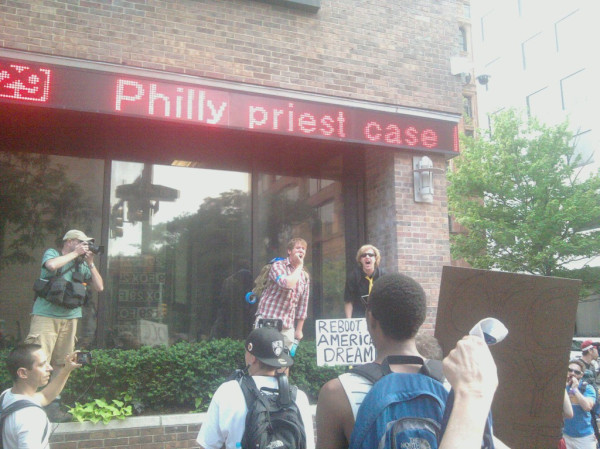 It was this march that led the gathering to a park just a few blocks from where they began, one of several in a complex of Independence Hall Park(s) in the vicinity of the signing place of the United States Constitution. There were only a few minutes of uneasy announcements, during which time I was approached more than once with the instruction (of dubious "official" origin) "if you have a tent, get ready to put it up."  It seemed that no one would be complying with this directive, and so after around 15 minutes of uneasy mic-checked logistics I left on a quest to the Society of Friends parking lot, a few blocks away, made available to Occupy National Gathering organizers by the Society's consent as refuge. The lot would shortly  become 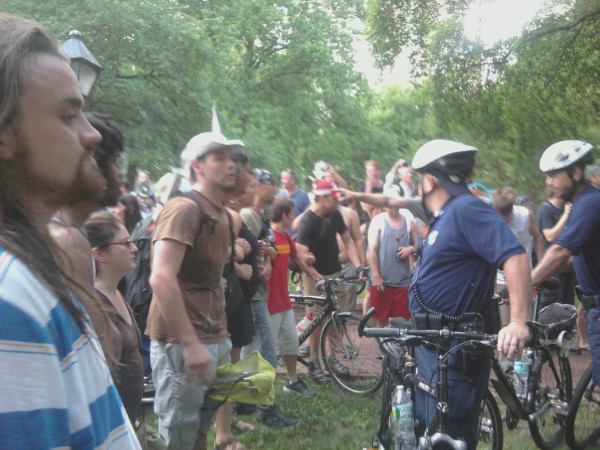 a very real sanctuary for still shocked activists reeling from an unflinchingly prohibitive Park Service.
Before I could arrive at the parking lot, I was alerted by blaring sirens to the convergence of dozens of police vehicles blocks behind me.
Here I found a column of National Park Police offers on bicycles being pushed through an ivied gate to the Bank 2 park grounds. They were being forced out by a wall of protesters, a defensive maneuver in response to the violent assault on several assembled  around 5 tents which someone had manage to pitch before the federal blitzkrieg.
Video of the Bank 2 Assault and Park Police being ejected:
More video from the Park:
The Occupy National Gathering moved its scheduled events to Franklin Square, part of the Philadelphia city-owned Fairmount Park system. Aside from returning to stand in defense of and in solidarity with Veterans for Peace activists who had erected a tent on the Mall grounds, the Gathering failed to re-amass in the field in front of Independence Hall, signing place of the US Constitution; the Cradle of Liberty.
The officials from the United States Park Service inflated vague rules to ridiculous thresholds and applied them to the Occupy National Gathering as a special case; someone was absolutely terrified that people would set up camp for five days. After all, heaven forbid the government's land facilitate sleep for a group of citizens acting for redress of grievances. 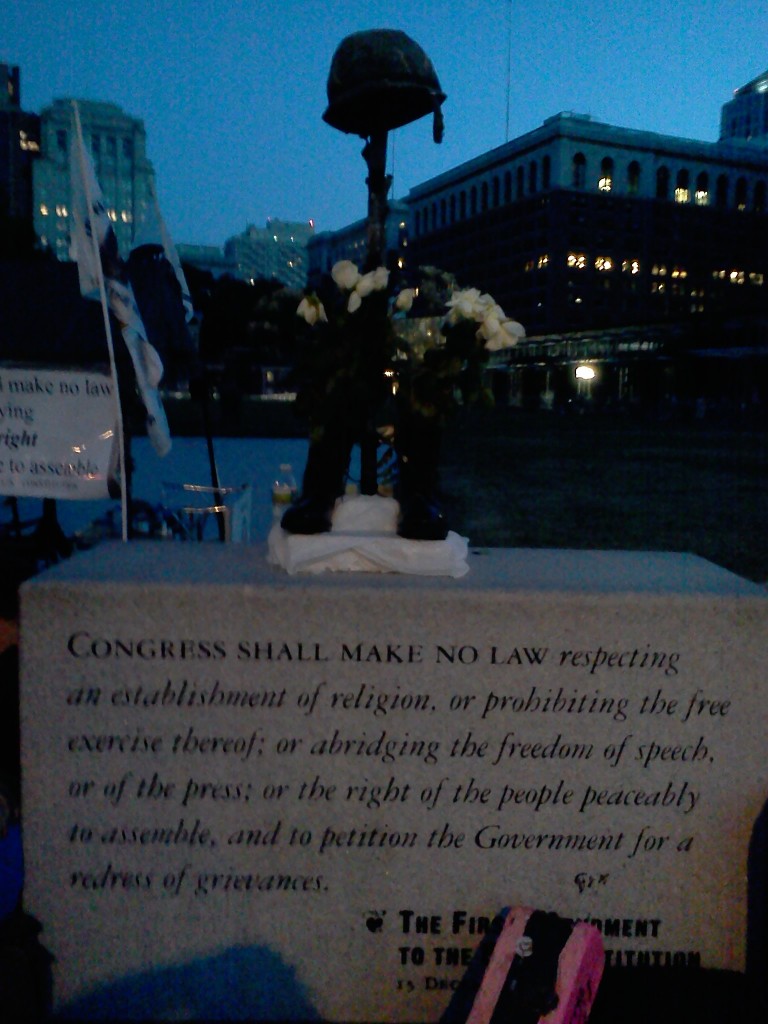