As Con Edison managers left the company’s headquarters near Union Square on Wednesday evening, locked out employees of Utility Workers of America Local 1-2 and members of Students United for a Free CUNY faced them from the picket lines.

Con Ed locked out its 8,500 unionized workers after contract renewal negotiations failed on July 1. Workers have been picketing at some 20 Con Ed locations throughout New York City and Westchester since then, demanding a fair deal on pensions, health care and wages. Meanwhile, negotiations have continued on and off, with talks resuming most recently on Tuesday.
“I believe this is a blatant union-busting tactic – the lockout – because it makes us weak and then they can pay us whatever they want,” said William, a cable splicer who has worked for Con Ed 23 years. “We should get fair pay, our work is dangerous and we do it in all conditions, hot or cold. We should get fairly compensated for that if the company is making money.”
And it is: last year, Con Ed grossed over $1 billion in profits, while its CEO Kevin Burke took home almost $11 million. According to Local 1-2, Burke has requested Con Ed shareholders to approve another pay raise while he is simultaneously seeking to cut worker benefits.
Con Ed workers face a similar predicament as CUNY students, who in 2011 protested the CUNY Board of Trustees vote to increase their tuition by $300 annually for five years. Just last month, students came out again to voice concerns about another board vote, this time increasing the salaries of top university administrators.
About a dozen members of Students United for a Free CUNY joined Local 1-2 workers on Wednesday in a show of solidarity. “Students and workers are facing many of the same issues, from minimum wage to tuition hikes. They’re still under oppression from up top, and it’s bridging a generational gap – you have people whose pensions are at risk and students whose education is at risk,” said Alvaro Franco, a senior at City College.
IN THE STREETS 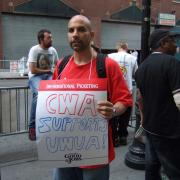 Dominic Renda, who has worked as a  call center representative at Verizon for the past 14 years, came out on Wednesday to support Con Ed employees: “Working people need to support each other. That’s the only way we’re going to win. It’s the only way Verizon workers are going to win this contract, it’s the only way Con Ed workers are going to get a decent deal out of this lockout.”
"Just imagine if Verizon workers and MTA workers went out on strike. At the same time as this lockout. We would probably all win. We do some of the most fundamental work for the city – between transit, phone and electricity.” 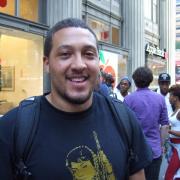 Domingo Estevez, an organizer with Students for a Free CUNY: “We’re here just to show the workers some support, because every struggle is intertwined.” 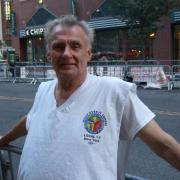 Bob, a senior designer, has been with Con Ed for 50 years: “Burke and Ivey, get your acts together: we’re not dumb, we’ve been here too long to not know what’s going on. Give us a fair shake, and we’ll give you one.”