On August 6, almost 30 members of the Andalusian Workers Union (SAT) entered two supermarkets in Écija and Arcos de la Frontera, two Spanish cities near Cádiz and Seville. They filled shopping carts with basic products such as rice, pasta and chickpeas while police officers stood at the doors to prevent them from taking the food out. In Écija almost 500 union members and supporters in the street distracted the police and those inside were able to take the food out. The food stolen in Écija was given to 32 families which have been living since last May in Corrala Utopía, a building they squatted with the support of 15M movement. The main goal of the action, however, was to protest the cuts of social services and the hike of the regressive VAT tax. As poverty continues to worsen in Spain, now affecting as much as 22 percent of the population, more people are imitating the SAT action in different parts of the country, claiming their fundamental right to food.

SAT is well known in Spain for its direct actions in defense of the rights of workers and for agrarian reform. Andalusia is an agricultural region that suffers the highest unemployment rate in the European Union — one in three people are unemployed, including 53 percent of those under 25 years old — and where a half of the arable land belongs to just a handful of families.

Starting in August of last year, the union led the way in squatting houses to resist an onslaught of evictions. Since March, too, SAT’s members have squatted on three farms. One of them, Somonte, has lasted for a half year under the control of the workers, who now are collecting the first fruits of their labor to sell at nearby markets.

Following last month’s the actions at the supermarkets, thousands of members and supporters of the union held a march through Andalusia to protest against the payment of the Spanish banks’ debt with money from the European rescue package. Along the way, the unionists occupied a house, a bank office and an outlet of the textile chain Zara (whose owner, Amancio Ortega, is the richest man in Europe). The day Chancellor Angela Merkel visited Spain, they went to a German-owned Lidl supermarket.

In the action on August 6, 12 people were arrested. Five of them have been charged with robbery and are facing one to three years in jail. But, according to Javier Álvarez, an SAT member who works at Somonte, “They are the thieves — the bankers and politicians. We get up at 6 a.m. to work, and fighting is the only way out we have.” 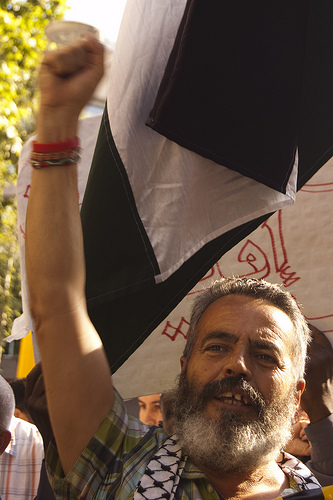 Repression is not a new problem for SAT, which calls itself the most punished union in Europe, with more than €500,000 in fines and members facing charges that amount to more than 40 years in jail. The response of the union was to announce that, as August 6 robbery suspect Juan Manuel Sánchez Gordillo told the alternative newspaper Diagonal, food “expropriations” in big supermarkets will not stop “until the government guarantees by law that five days before the food expires it must be donated to people in need.”

Gordillo is also the mayor of Marinaleda, a town-cooperative where for 30 years people have been giving the cold shoulder to capitalism. In the past, after massive hunger strikes and squatting of farms, they have compelled the Spanish government to give them land to cultivate.

Now, taking aim at supermarkets seems like a logical next step. “These companies exploit workers and with their price policies are ruining small businesses and farmers,” explains Javier Álvarez. He also warns that actions to come will not be limited to the supermarkets. “Yesterday we attacked a Mercadona,” he says, referring to a Spanish supermarket chain, “but tomorrow we will attack banks. We’re going to expropriate all they have stolen to the people. Symbolic actions are finished; we have to use direct actions.”

The idea of the food “expropriations” has spread around the country. More than 200 collectives have shown their support to the union and nearly 500 people have presented statements to the government in which they blame themselves for the actions of SAT. Meanwhile, the action is being replicated in supermarkets across the country.

On September 1, the day that the VAT tax hike took effect, several young people entered a supermarket in Ourense, Galicia, to steal shopping carts full of food. They couldn’t take the carts of food out, but they threw leaflets with slogans like “We are not afraid, we are hungry.” In Mérida, 50 people from Colectivo de la Trastienda and the Platform for a Basic Income also tried to imitate the SAT action, but they were intercepted by police as well. Some days later, in Vilafranca del Penedés, Catalonia, a single mother accompanied by dozens of activists from the Platform of People Affected by the Mortgage managed to steal food and other basic products, and she has been already fined €90 plus a compensation to the supermarket of €240.

With unemployment rates on the rise and social services cuts announced every week in the legislature, new forms of direct action and civil disobedience continue to emerge in Spain. Past struggles about education and health services are escalating as more and more people are in need of something even more basic: food.