For Caraqueños these days, it’s hard to escape the presidential candidates’ smiling faces and ubiquitous campaign slogans: Chávez is the “Heart of the Fatherland,” and Capriles has “A Path” for change. But with less than two months before Venezuela’s October 7 elections, Caracas, a city dominated by plain edifices, has been transformed into a vibrant canvas for political ads. As President Hugo Chávez and challenger Henrique Capriles brawl over the airwaves, supporters of both camps have taken to the streets to blanket the city with posters, murals, graffiti and stencils.

Recently, for a little while at least, passersby on one of the city’s main arteries, the Francisco de Miranda, saw something with a different political tinge: Urban artists working with the campaign No Te Engoriles (colloquially, “Don’t Go Berserk”) covered a barren wall in the eastern neighborhood of Chacao with a mural showing black-and-white images with anti-violence messages.

The campaign, known around the city for its trademark image of an enraged gorilla (engoriliado), began transforming vacant walls into art space to draw attention to the epidemic violence plaguing Caracas.

On the Francisco de Miranda, one of the two initial sites chosen for the street art project, a rendition of Gandhi beside a group of famous Venezuelans was tacked to the barrier beseeching viewers for peace, for the fair treatment of others and — as the large script written at the bottom of the mural stated — to “stop the violence!”

In 2011, according to the Venezuelan Violence Observatory, a non-governmental organization, Venezuela set a record for the number of homicides with over 19,000 people killed in the country. This is the highest rate in the region — 67 per 100,000 people — far surpassing that of Mexico. President Chávez has since deployed thousands of troops (rebranded as the “People’s Guard”) to Caracas and other areas to combat the crime and support local police; it’s now commonplace to see Guardsmen with assault rifles patrolling populous areas of the city.

The No Te Engoriles campaign was launched in November 2011 by the city’s Commission of Citizen Security and Human Rights, on behalf of the mayor’s office. The commission initiated the campaign to promote peace, tolerance, respect and ultimately coexistence in Caracas — where, according to the campaign’s estimates, there are 178 registered murders each month. With a staff of under 20, the commission relies on imagery, public events and, above all, citizen support to reduce violence in the city.

“In Caracas — above in all los barrios [Venezuelan slums] — exists the perception that el malandro or violent person is someone with power and demands respect,” explains Marjorie Chejin one of campaign’s coordinators. “We launched the image of the engoriliado to ridicule this type of behavior.”

The campaign commissioned local artist Luis Bonilla — or Fe, as he’s known. He describes his work, especially the colorful posters he tacks around Caracas, as a “critique of the lack of urban art in the city.” Bonilla generally avoids politics in his art. However, he explains, “This was a gesture for the cause to stop the violence.”

In addition to the posters, the commission is calling upon ambassadors — volunteers, celebrities, musicians and professional athletes — to publicly advocate an anti-violence message.

Both presidential candidates have unveiled plans for sweeping reforms to combat crime this summer, as Caracas is now on pace to top last year’s homicide numbers. But the commission is trying to steer clear of politics. “We don’t want any to include any political or polarized message,” says Chejin.

Still, the presidential race has already come into visual conflict with the No Te Engoriles campaign. Its mural on the Francisco de Miranda and another in the neighborhood of Los Ruices were defaced last month days after their completion: They were covered in Chávez campaign posters. “We heard about it through Twitter,” recounts Vanessa Zerpa, another campaign coordinator, as their followers first alerted them to the vandalism.

Given that it’s an election year, Bonilla laments, “I wasn’t so surprised to see this happen. Making these anti-violence demands in the streets is something that reflects negatively on the government.” But he was taken aback by how quickly his work was defaced.

Soon, however, No Te Engoriles received a flood of messages over social media expressing disgust with the vandalism. Urban artists sick of political propaganda, and indignant over the abuse of art promoting peace, spontaneously gathered on the Francisco de Miranda on July 15 to reclaim the mural. These artists, with no affiliation with No Te Engoriles, used their own materials and recovered the wall with more posters and messages chronicling the vandalism, and claiming that the destruction of art is itself a form of violence. 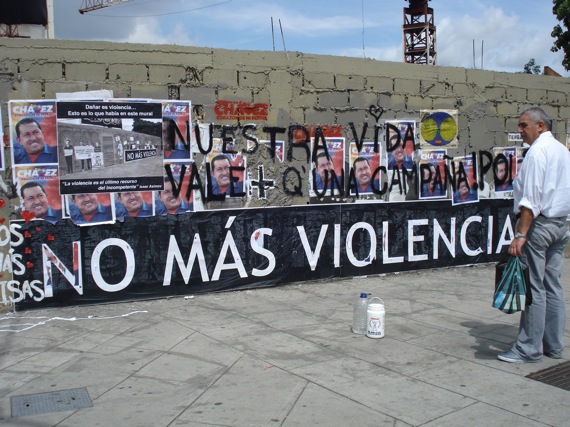 “Citizens themselves felt disrespected when they defaced the mural,” said Vanessa Zerpa, in reference to the messages she received about the vandalism. The new mural centered around a spray-painted message: “Our lives are worth more than a political campaign.”