Few figures in the Marxist tradition thought harder than Rosa Luxemburg about the central phenomenon that defines the contemporary world: the globalization of capital. It is altogether appropriate, then, that the foundation that bears her name is decidedly internationalist in character. And now, it has opened its New York office right here on 275 Madison Avenue.

In the Library of the General Society of Mechanics & Tradesmen on 44th Street, a centuries-old institution established to serve the families of skilled craftsmen here in New York, more than 250 people gathered on November 14 to celebrate this official opening of the Rosa Luxemburg Foundation’s New York office.

The foundation is an international, progressive non-profit affiliated with the German Left Party (Die Linke). It coöperates with organizations around the globe to promote democratic and social participation, the empowerment of disadvantaged groups, and alternatives for social and economic development.

The opening event featured a keynote address by Gregor Gysi, one of Europe’s most well-known socialist politicians, known for barbs of wit and force of character. Gysi recounted his party’s struggles in making up the trust-deficit from the taint of the East German legacy. “I am a democratic socialist; I don’t like concentrated authority,” said Gysi. “State socialism has failed, but this does not mean that capitalism is the only game in town. Capitalism thought it won, but it didn’t—it’s just what remained.”

There were conversations about the EU crisis and the past and future of the German Left with German and EU Parliament members, and, in another panel, directors from other regional offices discussed their experiences and successes in report-backs from around the world, giving the audience a sense of what kind and scope of collaborative work might be possible with the progressive community here in North America.

Regional director Joanna Gwiazdecka recounted a longstanding campaign against homophobia in Catholic and conservative Warsaw that had seen some success; Torge Löding described the support of an independent media center in Costa Rica, “Voces Nuestras,” to open a space to counter the stifling neoliberal CAFTA ‘consensus’; Johannesburg-based Armin Osmanovic described efforts to wean South Africa from its dependence on coal for 90% of its electricity and the ongoing labor struggles in the extraction industries there. The array was thought-provoking.

“Altogether it exceeded my expectations,” said Albert Scharenberg of the inaugural public event. He, along with Stefanie Ehmsen, are co-directors of the New York office. “The turnout was terrific. When you haven’t done organizing in NYC, we weren’t sure what to expect.” The event closed with a flourish: the dramatic reading of Rosa Luxemberg’s personal letters to comrades and lovers. “I was really amazed by the performance by Kathleen Chalfant in particular, bringing to life the letters of Rosa Luxemburg,” commented Scharenberg.

What kind of work does the RLS plan to do here, and with whom? As for partners, the co-director made it clear that they sought to help realize a big-tent left: “We are a pluralist organization,” said Scharenberg. “It might be socialist, it might be people doing local, grassroots stuff. We’re not particularly fond of having partners with just one particular ideology. People who consider themselves pacifists, trade-unionists, or environmentalists are all welcome.” Sharenberg added, “We strongly believe that this is the direction the left should go in. This is part of why we were so excited about Occupy.”

Outside of the local context, where RLS has begun working with the Left Forum and the Brecht Forum, the New York office is the point office for the US and Canada more generally. And it also intends to work on UN-related issues here in the New York office, particularly with partners from the Global South. Scharenberg clarifies, “That doesn’t mean that we’ll be doing lobbying. For example, we have just organized a conference with the Global Labor Institute from Cornell to convene a conference about energy transition, asking, ‘What can Unions do to work against climate change?’”

James Hare, a project manager for RLS, describes how they hit the ground running with this project, the organizing of the “Energy Emergency, Energy Transition” conference in October. “We brought together leaders from unions all around the world to try to articulate a new way to address the energy emergency. The idea is that there has been this process going on for twenty years now that has really been a failure.” Hare elaborates, referring  to the Rio+20 conference this summer, one of twenty such summits, “The official governmental offices, under UN auspices, have not been able to come up with any kind of meaningful response. Its process is one that unions have been on the sidelines for; they haven’t really been at the table. And as a result, they’ve been proposing market-based solutions exclusively.” Hare continued, “The framework of energy democracy was the focus here. All unions are in some sense energy unions in that they have a stake in addressing this issue. They talked about bringing energy under union and cooperative control. It’s the first step of a longer conversation.” This is an urgent instantiation of what the prospects and stakes of such international organizing may be, but of course there’s much work to be done.

The Rosa Luxemburg Stiftung institution is a peculiar one, and the German system from which it comes seems exemplary in one surprising respect. Scharenberg explained, “The funding that the foundation gets is all provided by the federal government. Germany has a great law for political foundations. Every party that has representatives in the national federal parliament is entitled to have a foundation that will be funded by the federal government. This is a great thing. This is a government funding its own opposition.” With the electoral success of the German Left party (Die Linke) in 2009, the funding was increased, making this expansion possible.

It is worth noting one caveat, though, that Scharenberg put forward: “I usually have to explain that we’re not an American type of foundation like the Ford Foundation where you would have to apply for grants. We can’t give out grants.”

One attendee, Javier Enriquez, came to the event in search of an ally after reading about the opening event in the newspaper. “I wanted to get more involved with international actors,” said Enriquez, “so I showed up.” After getting started in politics with the Greens and running for state assembly and Kings County committee district representative, Enriquez founded the Associated Indigenous Movement, which seeks lasting changes for the Indigenous peoples of the western hemisphere. He was able to engage Torge Löding, the director of the Mexico City office present for the event, and is hopeful that the continued conversation will bear fruit.

RLS intends to build a two-way street. “[Our aim] is also to bring back information to Germany and Europe,” said co-director Scharenberg. “People [in Germany] want to know something about the American left. Is there anything going on that’s electorally progressive?” Gregor Gysi, in his keynote, references the standard European conception of the American left and its failings. These are represented in three parts: McCarthyism, the deep and lasting legacy of racism, and the war in Vietnam. Gysi noted that this is obviously one-sided.

There is much more to be shared, we know, in both ways.

“You know, we from East Germany have experience to share in one respect,” said Gysi, in a concluding remark. “We know what it’s like for the whole system to disappear suddenly. I hope that you, too, will someday experience this.” 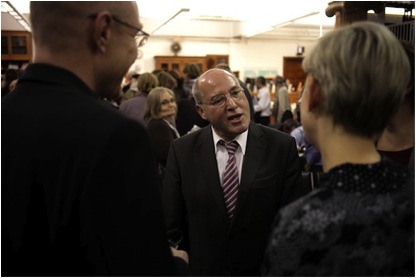