I keep thinking about the guy, punching himself in front of the grocery store. In 2000, performance artist Dave McKenzie made the video Edward and Me: he stood in the entrance to an anonymous supermarket, flailing and thrashing as if tormented by invisible demons (an homage to Edward Norton’s torn-apart character in Fight Club). More than just nighttime hi-jinx (though it’s that, too), McKenzie’s performance shows a young, Black man taking momentary control of a suburban landscape, an environment that draws significance from how nondescript, how totally “normal” it looks. Going back several generations, we find John Vachon’s Housing project for Negroes, row of finished homes, a 1937 photo showing a sunny street of suburban houses in Newport News, Virginia. Again, the landscape is utterly “normal,” except that it isn’t: it marks one of the federal government’s first attempts at providing decent housing for Black families.

McKenzie’s video is part of “Radical Presence: Black Performance in Contemporary Art,” currently on view at NYU’s Grey Gallery (with more to come this November at the Studio Museum in Harlem). The Vachon photo is part of “Claiming Citizenship: African Americans and New Deal Photography,” on view at the New York Public Library’s Schomburg Center, in Harlem (along with “Schomburg Collects WPA Artists 1935-1943,” a handsome show of visual art from the period).

Together, the two exhibits give simultaneously clashing and complementary visions of Black American life. “Radical Presence” shows actions that play with the outer edges of social propriety, like Pope.L’s Eating the Wall Street Journal (2000), in which the artist — nearly naked, covered in flour and sitting on a toilet — went about reading, eating and regurgitating ketchup-soaked scraps of the famously conservative newspaper. “Claiming Citizenship,” meanwhile, presents news photos that seem primed to convince cynical, white Americans that Black people are, well, normal. 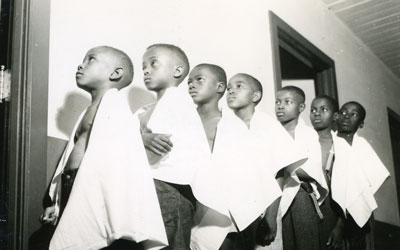 Young boys wait their turn to be examined by a doctor at the WPA-built Slossfield Health Center in Birmingham, Alabama, June 1938. Credit: National Archives

One of the exhibit’s best images is a detailed shot of a 1942 auto repair class in Rockville, Maryland. In the context of “Claiming Citizenship,” the photo reminds us that these otherwise placid images — of Black people working, attending classes or enjoying time at home — appear not as givens, but as things that had to be fought for: part of an incredibly fraught historical trajectory.

“Claiming Citizenship” points out that “citizenship” is different from “freedom” — shot around 70 years after the end of slavery in the United States, the photographs in the exhibit show Black Americans actively engaging with conditions of citizenship rather than just simple survival. The exhibit posits “citizenship” as the right to (among other things) “possess economic security,” “engage in civic life,” “be educated persons,” “receive health care,” “have a publicly acknowledged history” and, of course, “vote.”

To that end, we see schoolchildren peering through microscopes, couples purchasing homes and men receiving doctor’s exams. One of my favorite shots is a harshly-lit portrait of sculptor and teacher Henry Bannarn — of the Harlem Community Art Center — gazing intently into the camera as he presents a finely-crafted female nude. Over at “Radical Presence,” we see Lorraine O’Grady performing as the imaginary African beauty queen Mlle. Bourgeoise Noire, storming into 1980s art-world cocktail parties with her sash and tiara, reciting manifestoes and beating herself with a whip. O’Grady’s performances were meant to highlight a lack of Black, female presence in the art world as well as in other intellectual spheres (feminist scholarship, for example).

Similar to how Pope.L’s grotesque, flour-doused absorption of the Wall Street Journal speaks to the condition of a perplexed outsider — someone going about everything the incorrect way — O’Grady’s performances draw off a salient, perpetual otherness. We’ve come a long way from WPA relief efforts, but some of the impulses that informed those 1930s photos can be found in the work of these contemporary artists: identifying the varieties of exclusion, the things that keep Black citizens away from those echelons of culture that have remained, pretty much, whites-only. 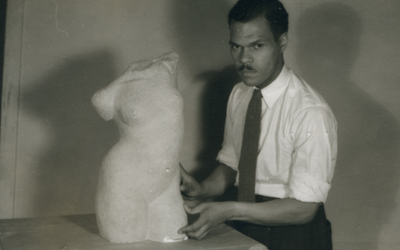 Henry Bannarn, the sculptor of the NYC WPA Art Project and a teacher at the Harlem Community Art Center, displays one of his works. Credit: National Archives

Other work in “Radical Presence” looks at how each new generation receives and tries to make sense of Black history. In Sherman Fleming’s Pretending to Be Rock (1993), the artist stayed on his hands and knees for hours, as hot wax from a candelabrum coated his nearly naked body. The piece gets some energy from sexualized club culture, while making clear allusions to the subjugation of Black men in America’s dark past.

In 2013, though, this past maybe isn’t as past as we’d like: after the Supreme Court’s recent gutting of the 1965 Voting Rights Act, several states (including Texas, North Carolina and Virginia) are in the process of enacting voter ID laws that would disproportionately prevent people of color from being able to vote. “Claiming Citizenship” includes a strong 1942 photo by Marjory Collins called Showing a Negro how to vote at the polls on election day: it shows an older Black man confronting a voting machine, probably for the first time. This image was, perhaps, radical when it was first taken. Who would’ve imagined that even now, and despite so much, this sort of action could still be an affront to prevailing norms? That this image could still be, somehow, radical?