What’s the most environmentally sustainable way to distribute a newspaper?

This past autumn The Indypendent took a step toward greater sustainability and made our distribution — the crucial process of getting copies of the paper into community and activist centers, libraries, bookshops, cafés and other spots all over New York City — 100 percent carbon and fossil-fuel free.

The magic is in the bicycles. The Indy’s teaming up with the NYC Cargo Bike Collective, a Brooklyn-based, worker-run business of politically-minded, strong-willed and — yes, iron-legged bikers who do deliveries around the city. Their mission is to promote cargo bikes and one day have them replace cars altogether.

Every month, the bike operators pick up papers from the Indy’s printers in Long Island City, Queens and pedal thousands of copies to the far corners of the city, over the Williamsburg Bridge and even as far as Yankee Stadium in the Bronx.

“The best part of the Indy job is at the printers, loading up, because of course there’s no other cargo bikes, there are cargo vans and trucks,” said Rachel Schneider. She’s a CBC operator and anointed illustrator. “The printers and the other people who are picking up newspapers out of that location are always really amazed at what we’re doing.”

So are we at the Indy. The CBC not only moves all our papers, but they’ll also be distributing through the winter, and they’ve come up with an inspired way of bringing bundles from LIC to the scores of Indy spots in Manhattan. Call it “swarming”: one hearty operator loads up a giant trailer — “the mothership” — with bundles and brings them over the Williamsburg Bridge (see CBC operator Yotam Sayer, below). Then the other, lighter and faster operators pick up bundles, deliver them, and come back to the mothership for more. Repeat. 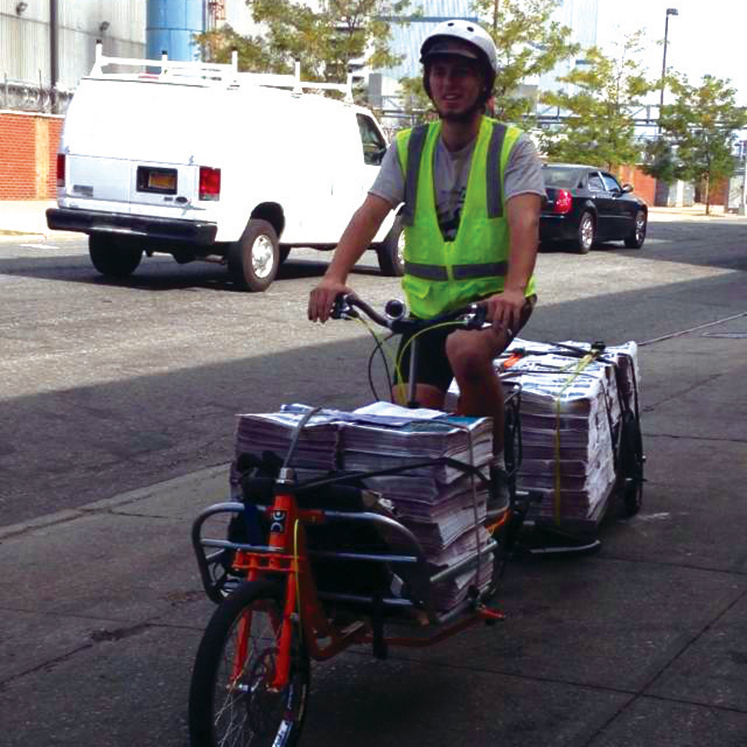 The CBC has a fleet of bikes, each one aptly or cheekily named — “DJ,” “Freighty Cat,” “Roxy,” “Ice-Cream” (aka “Harvey Milk”) and so on, a half-dozen full-time operators along with about a dozen ancillary members and ties to New York City’s grassroots progressive and activist communities.

The CBC’s members envision a more sustainable future and the collective’s internal process is steeped with a familiarity with consensus derived from Occupy Wall Street. “We don’t want to see a world where capitalism and bureaucracy trump human need or the need of the earth to not be polluted,” said Joe Sharkey, a CBC operator.

“We’re here because we want to support activism,” added Rebekah Schiller, also an operator. The collective helps with direct actions and events, including the recent Jeremy Hammond light and noise demo at NYC’s Metropolitan Detention Center, the Brooklyn Free Store’s Really Really Black Friday event, #S17, May Day and more. “We want to support community projects, and the way we make sure that happens is that we support ourselves through this delivery business.”

And they can deliver just about anything: thousands of Indys, fridges, the entire contents of the Brooklyn Free Store, your compost…

You can learn more about the NYC Cargo Bike Collective at facebook.com/NYCCargoBikeCollective or @ReplaceCarsNYC.