Editor’s note: “Homeless people know what’s not working, and they know what needs to change,” say members and staff at Picture the Homeless. PTH was founded during the Giuliani era, when the homeless were regularly demonized. Led by its members, the group has consistently advocated homeless rights and for creative policy solutions that would make truly affordable housing available to everyone. With a new mayor who campaigned on a platform of a “tale of two cities,” The Indypendent invited PTH members and staff to share their thoughts on how to solve a crisis they know more intimately than anyone in this city. 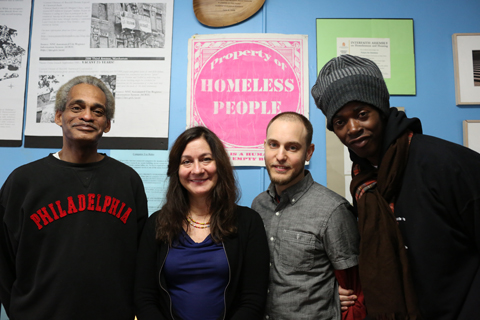 (From left to right) Stanley Stevenson, Lynn Lewis, Sam J. Miller and Marcus Moore of Picture the Homeless at their office in the Bronx. Credit: Timothy Krause

When Bill de Blasio took office on January 1, he inherited a broken, bloated and expensive homeless shelter system that cost almost $1 billion to operate in 2013. He also inherited neighborhoods dotted with vacant buildings and lots that represent both potential housing and jobs. For New York’s homeless, there is a Kafkaesque paradigm where so-called affordable housing is in fact unaffordable due to the federal government’s Area Median Income guidelines.

Those who can’t afford housing are the same unemployed, or low-wage workers, seniors, disabled and just poor New Yorkers in the shelter system. On bitterly cold nights this winter, the shelter-industrial complex housed more than 50,000 adults and children — enough to fill Yankee Stadium. That didn’t include those using the domestic violence shelter system and the untold numbers of homeless folks sleeping in churches, mosques and synagogues. Nor does it include the thousands sleeping in trains, public transit facilities or parks. It doesn’t include the hundreds of thousands doubled or tripled up with friends and family hoping for a break so that they don’t have to go into the shelter system.

Real Roots of the Problem

Homelessness has been framed as the result of individual dysfunction and pathology. “Oh, they’re mentally ill, or they need to get a job” — this mantra has been repeated by politicians and media for two decades. Picture the Homeless encourages the de Blasio administration to look at the big picture, to take into account rising rents and stagnant incomes at the bottom of the wage scale. Forces like gentrification, property warehousing and disinvestment in effective housing programs such as Section 8 have led us to where we are today.

The bottom-line cause of homelessness is the high cost of housing. Real estate development here has been geared to business interests, hotels and high rises, offices and office towers. When there is new housing construction, it’s for the super rich. Banks and landlords keep buildings empty while they wait for neighborhoods to gentrify, and to get rid of protections on rent-stabilized apartments.

Mayor Michael Bloomberg took away the homeless priority for permanent housing solutions like Section 8 and public housing, replacing them with time-limited rental subsidy programs (first Housing Stability Plus and then the Advantage programs) that were doomed from the start.

Past administrations have cried poverty when asked why they don’t prioritize housing for homeless people, but that’s a lie. The money’s there, it’s just being wasted on a politically connected shelter-industrial complex. A billion dollars a year could house a lot of people. Most shelters get two to three times as much money per month for each homeless household as it would cost to pay their rent.

In 2011, we partnered with the Hunter College Center for Community Planning and Development to devise and execute a replicable methodology for how the city could conduct a vacant property census. We found enough empty buildings and lots to house up to 200,000 people, and that was just in one-third of the city. But the city doesn’t keep track of vacant property and the little bit of money that is out there is being used to house people in shelters.

Every homeless person is different, and it’s true that mental illness and substance abuse play a role in some people losing their housing, but plenty of very wealthy people have issues of substance abuse or mental illness. The root issue is poverty. Public policy needs to address the systemic causes of homelessness. No mayor or president can implement a policy to stop people from having mental illness or losing their jobs, but they can make it so that everyone can afford housing.

There are numerous factors that contribute to record levels of homelessness, like how people coming home from jail with a record are excluded from housing, so there’s nowhere for them to go. Banks are still redlining in certain communities. Institutional racism is also a huge problem — over 90 percent of homeless families in shelters are African-American and/or Latino. Predatory lending has been targeting people of color. Ninety-nine percent of the people who go into housing court get no legal representation, so many of them end up losing their homes.

There’s no cohesive overall plan between government agencies that serve low-income people, and that adds up to a lot of resources being wasted. There’s no unity or collaboration between housing courts and the welfare and shelter systems. HRA, DHS, NYPD — it’s a whole lot of alphabet soup that doesn’t add up to anything. 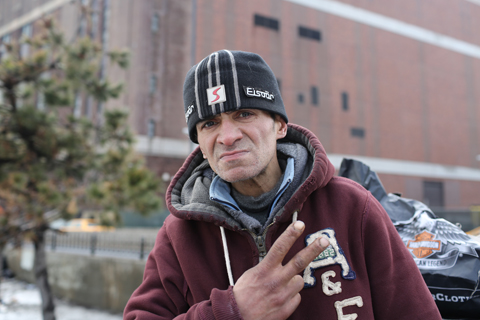 Charlie is a homeless man and an artist. Credit: Timothy Krause

At Picture the Homeless, we don’t just complain about problems. Homeless people know what’s not working, and they know what needs to change. That’s why our organizing campaigns have concrete policy demands of the new administration.

For starters, it’s unacceptable that the city has no idea how much property is currently vacant. We have to have conduct an annual citywide count of vacant buildings and lots, so we know what kind of resources are out there to develop new housing — and who’s keeping housing off the market. Legislation that would empower the city to do such a count was stalled for three years in the City Council under Christine Quinn. We were heartened to see it identified as a necessary solution on Bill de Blasio’s campaign website, as well as a priority for the City Council’s Progressive Caucus.

The new administration could immediately utilize a small portion of the Department of Homeless Services’ (DHS) shelter budget (even just 1 percent would be almost $10 million!) and create permanent rental subsidies so homeless people can get out of shelters. That funding could also support a pilot project for innovative housing models like community land trusts, which have the potential to create permanently-affordable, democratically-controlled housing for folks at all income levels, as well as supporting small businesses and incubating jobs that pay a living wage.

The city should take all the property whose owners owe taxes on water or violations, and put it into a land bank and develop it for those who really need it. Property that the city acquires through the Third Party Transfer program should be prioritized for nonprofit housing developers, including community land trusts. And the city should create and expand community land trusts that will be permanently affordable to the people who live there.

The new administration could also limit what is considered “affordable housing” to the city of New York. Right now, “affordable housing” can go to folks making upwards of $80,000 a year, because it’s based on Area Median Income calculations that factor in affluent parts of Westchester and Long Island.

It isn’t about whether policies are working, it’s about who they’re working for. Most of Bloomberg’s policies worked just fine — for the very rich. The previous administration upzoned more than one-third of the city, which set in motion speculative real estate forces that jacked up rents and destabilized communities. We need policies shaped by the people who will have to live with them and that will benefit the low-income communities of color that have been devastated by gentrification and long histories of racist municipal planning.

Too often, elected officials who shape public policy leave out the voices of low-income people in favor of landlords and real estate developers who make huge campaign donations. Since we don’t have money, we need to use people power to hold elected officials accountable. When they make promises, we need to make noise until they come through.

For almost 15 years, we’ve been saying “Housing, Not Shelter.” With a progressive mayor who pledged to address income inequality in office, we intend to make sure that the DHS shelter budget goes into permanent housing.

And we need to stop pretending that aggressive law enforcement and police harassment and criminalization are viable solutions to homelessness.

Taxpayer money also goes to so-called “back-to-work” programs that are mostly scams. They pay all this money for you to go to a place so a paper-pusher can have a job and get paid. Or if you do get paid, it’s 32 cents an hour to work in a park. The Work Experience Program (WEP) is essentially a way to skirt minimum wage laws. But if you don’t go, you’re FTC — ‘failure to comply’ — and can get kicked out of the shelter. Some people say FTC actually stands for “fuck the client.”

We don’t think that anyone should be sleeping on the streets, or in shelters. We think everyone should be housed. And please remember that homelessness is not just an issue for those of us without housing. The housing crisis hurts us all, from the people who can’t afford housing to the people trapped in sub-standard, dangerous, overcrowded or threatened housing, to the professionals who pay so much of their income toward rent that their life options are dramatically limited. The misery meted out to the homeless also serves to discipline everyone else into accepting their situation knowing that things could be much worse.

Until we live in a city where housing is a human right, and community needs are prioritized over greed, we’ll have homeless folks and the gnawing fear of becoming homeless. People who live on the street should be treated with dignity and respect, not subject to daily violations of their constitutional rights and constant arrest. And people who end up in a shelter should not have to deal with unsafe situations, or be trapped there for years because our city’s priorities are all wrong.