For many people, art is something that resides in museums and galleries and is bought and sold as a marker of privilege. But what happens when the creative, questioning spirit of art becomes fused with political dissent? In his new book, A People’s Art History of the United States (New Press, 2013), art historian Nicolas Lampert places his analysis clearly in the tradition of Howard Zinn. Through that lens he rethinks the history of U.S. cultures of resistance: distinct from established art institutions, and rooted in the communities, streets and movements that push for social change.

Lampert dedicates his book “to the activist-artists and the artist-activists.” An artist himself, he recognizes the contributions of both movement participants that make visual culture and trained artists that use their work to shape movements. And he offers readers stories and images of art from some 30 political struggles, spanning from Native Americans’ relations with colonial settlers and the American Revolution to the 21st century fight against climate change. Here are some of them. 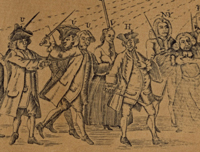 Brit Bashing: Famed Revolutionary-era patriot Paul Revere created the engraving A View of the Year 1765. A harsh piece of anti-British propaganda, it featured colonists raising their swords to slay a dragon representing the despised Stamp Act and a scene from Boston’s Liberty Tree.

Tenement Life: Jacob A. Riis — tenement reformer, photographer and author of the book How the Other Half Lives — documented the deplorable conditions of immigrants and the poor in New York City’s late 19th-century tenements. His work (above) led not only to tenement reform but also to the new genre of social documentary photography. 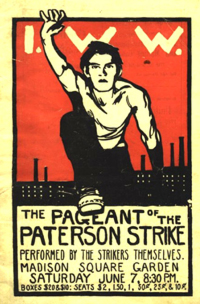 Strike!: An event program for a giant pageant staged on behalf of the 1913 Paterson, NJ, silk strike, in which 25,000 workers walked off the job for six months. Among their tactics was a performance of the strike in Madison Square Garden, spectacularly staged while the strike itself was ongoing. 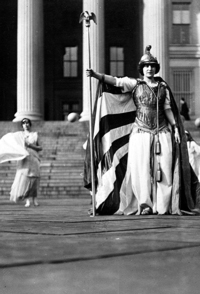 Lady Liberty: In the 1910s, the U.S. women’s suffrage movement picked up steam. On March 3, 1913, the day before President Woodrow Wilson’s second inauguration, the suffragettes organized a parade in Washington, D.C. — it was a spectacle of great proportions, with several thousand women marchers, 26 floats, ten bands, six golden chariots and more (above). Many suffragettes were later jailed for their activism, but their efforts paid off with the ratification of the Nineteenth Amendment granting women the right to vote in 1919. 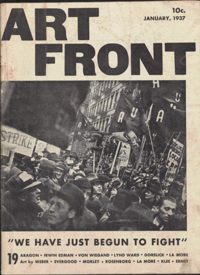 Fighting Back: During the Great Depression, unemployed artists organized to form the Artists’ Union, which succeeded in lobbying the federal government to create the Public Works of Art Project and the Works Progress Administration Federal Art Project. They used their union newspaper, Art Front, to agitate.

Detained: After the bombing of Pearl Harbor by Japan in 1941, more than 100,000 Japanese Americans were placed in government internment camps in remote parts of the western United States. One of the internees, Miné Okubo, created many illustrations (example above) depicting her life inside a camp and in 1946, published Citizen 13660, a book about her experiences. 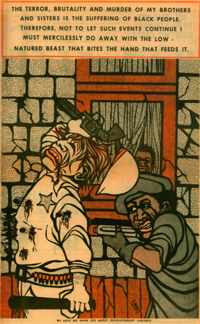 Violent Visions: The upheavals of the 1960s helped give rise to the Black Panther Party, which used graphic arts as one way to articulate its revolutionary message and its newspaper, The Black Panther, to spread it. Emory Douglas, the BPP’s minister of culture, created the party’s visual branding — the image of the pig, Panther warriors, the bootlickers gallery and more. Reflecting the conflicts of the time, Douglas created a December 1970 poster showing an African American man shooting a cop as a child looks on. Douglas was also inspired by the images of the Organization of Solidarity of the People of Asia, Africa and Latin America. 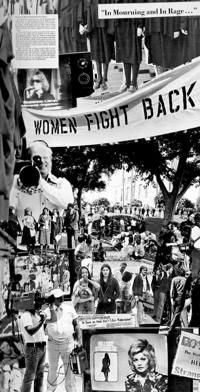 Geography of Power: In the 1970s, California-based artist Suzanne Lacy used public performance to spotlight and fight back against an epidemic of rape and violence against women. With her geographical focus on Los Angeles, a hotspot of the violence, Lacy undertook such projects as Three Weeks in May (1977), a three-week sequence of public events that included performances, actions, speak-outs, defense clinics and more (Lacy’s daily practice of stamping “rape” on a map of L.A. as incidents of rape were reported to the police). She also collaborated with Leslie Labowitz-Starus on In Mourning and in Rage (1977), a public performance of mourning conceived in response to the mainstream media’s sensationalized coverage of the murders of 10 L.A. women by two serial killers (at top, A Woman’s Image of Mass Media (1977), a photomural that was created after the performance). 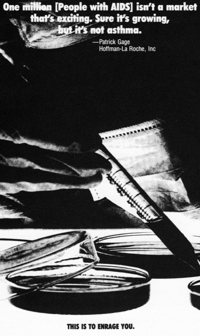 Pink Triangle: As the AIDS crisis escalated in the mid-1980s and the government did little to help, activist art and graphics became a crucial element of the AIDS movement. And the artworks became a form of political and cultural resistance in and of themselves — one of the most iconic, the 1986 poster Silence = Death (below) was used by AIDS activist group ACT UP as a call to action and a direct response to government apathy and media hysteria.

Creative Climate: The Yes Men, the culture jamming duo of Jacques Servin and Igor Vamos, use hoax, spectacle and parody to intervene in the excesses of capitalist culture. In one 2006 project targeting global warming, they posed as employees of the oil giant Halliburton attending a “catastrophic loss” insurance conference. There, they presented the SurvivaBall — a giant, orb-like outfit supposedly able to protect its wearer in all kinds of catastrophic conditions, including climate change-induced natural disasters (below).