New York City hospitals are dying out. They take up whole blocks, sometimes more, in a city where every square foot has a price tag. Space is limited and condos for a select, wealthy few are more profitable than treatment centers whose emergency room doors are open to everyone.

Fifteen New York City hospitals have closed down since 2003. In the most high-profile of the recent shutdowns, St. Vincent’s Catholic Medical Center was demolished in 2012. Where the hospital stood for more than a century and a half on 12th Street and Seventh Avenue in the West Village, developers at Rudin Management Company and Global Holdings have replaced inpatient care units with terraced, two-bedroom apartments. The new site also now contains a private garden, underground parking, a 25-meter-long swimming pool and a golf simulator.

Three blocks north, where St. Vincent’s operated a cancer treatment facility, another development has sprung up. Amenities, according to the Gothamist, include “Feng Shui guidance,” “a residential dog walker,” “on-site personal trainers and group exercise fitness classes, beauty and spa services,” “at-home certified massages” and “regular deliveries of organic cold-pressed juices and cleanses to your doorstep.”

Fearing that their hospital could be next, a vocal coalition of patients and caregivers in Brooklyn has been resisting efforts by the State University of New York (SUNY) to close Long Island College Hospital (LICH). Similar efforts are also under way to save the nearly bankrupt Interfaith Medical Center in Bedford-Stuyvesant.

“My son was born at Long Island College Hospital 28 years ago,” said LICH defender Maria Roca, wondering where she and others will turn if there is an emergency and its doors are closed. “I’ve been a patient and my mom, who is now in her 90s and has Alzheimer’s, her geriatrician is at LICH.”

Located on a high embankment along the East River in Brooklyn’s gentrified Cobble Hill neighborhood,  the hospital is a developer’s dream. One can imagine a yuppie languidly watching the sunset with an unobstructed view of Manhattan’s skyline from a pricy loft where LICH currently stands. But the hospital also serves the adjacent communities of Brooklyn Heights, Carroll Gardens and Red Hook.

Patients from the surrounding area, who would have to travel much farther to reach a hospital if LICH shuts down, have been a key part of the Save LICH Coalition. Working with hospital staff and elected officials, they are hoping for a last-minute miracle to keep the facility open.

“LICH is going to go the way of St. Vincent’s,” Bill de Blasio warned, four months before he was elected New York’s mayor, “unless the community steps in and forces the SUNY board [of trustees] to do the right thing and provide the information we need.”

De Blasio held the office of public advocate at the time and was seeking the names of parties who had expressed interest in purchasing the hospital. “Most of them are health care providers,” de Blasio said, “one is a developer. We don’t know who they are, we don’t know the details of the proposals. For elected officials, for the community to work together to save LICH, we need that information.”

De Blasio was arrested in front of SUNY’s midtown offices last July together with about a dozen LICH care providers and patients. The act of civil disobedience helped vault him from the bottom to the top of the polls in a crowded Democratic primary race and bolstered LICH’s cause. However, a deal championed by the new mayor in tandem with Gov. Andrew Cuomo, announced February 20, leaves the hospital’s fate uncertain. Under the agreement reached between labor unions, SUNY and elected leaders, LICH could be sold off as early this May.

Nonetheless, New York State Nurses Association (NYSNA), Service Employees International Union (SEIU) and local community groups in the Save LICH Coalition hailed the arrangement, describing it in a joint press release as “the best chance of LICH remaining a hospital.”

The deal gives coalition members and the public advocate’s office a minority vote on a technical committee deciding who will purchase the hospital and establishes a point system whereby preference will be given to potential buyers that will keep providing health services. But it also frees SUNY from a restraining order that had prevented it from divesting itself of the hospital.

The public advocate’s office and community groups won the order from Kings County Court in July after SUNY administrators began diverting ambulances and shutting the hospital down. Many saw the governor’s hidden hand in the attempted shutdown, because he had turned a deaf ear to protests for bailout funds and because he appoints members to the SUNY Board of Trustees.

Two weeks after the deal was brokered in February, SUNY announced layoffs of 600 of LICH’s 1,400 employees.

The bidding process mandated by the settlement saw nine groups submit proposals by a March 22 deadline to purchase LICH and redevelop it. The amounts being offered ranged from $210 to $251 million. Each of the nine proposals envisions creating a combination of affordable and market-rate housing, commercial space and a medical facility of some kind, including five that would allow LICH to continue as a full-service hospital. Under the terms of the settlement SUNY has the largest say over the future of the hospital. It is expected to announce its decision in early April.

Why Hospitals are Flatlining

There are a number of factors leading to the closing of New York’s hospitals. First, medical inflation has skyrocketed, soaring at a rate of about 7 percent annually from 2000 to 2008. Simultaneously, Medicaid and Medicare reimbursement formulas have been reduced, as a result of a federal law passed by a Republican-led Congress and signed by former President Bill Clinton in 1997. State support for hospitals has also been heavily cut since that time.

While government austerity policies have played a key role in sending hospitals that serve too many poor, working-class and elderly patients spiraling into bankruptcy, the vagaries of private health care economics haven’t helped either.

Prestigious Manhattan-based hospital systems with ties to university medical centers like New York Presbyterian, Mount Sinai and NYU Langone Medical Center routinely land at the top of U.S. News & World Report’s Honor Roll of Best Hospitals. They can extract better reimbursement rates from private insurers who don’t want to be cut out of these hospitals and risk losing their most affluent policy holders. Smaller outer-borough hospitals lack the market power to do the same.

“It’s about profit,” said Sean Petty, a member of the New York State Nurses Association’s governing board. “Medicaid and Medicare are being cut, forcing hospitals that cater to those patients to close. At the same time we’re seeing expanded services at hospitals that treat patients who have insurances that pay very well.” 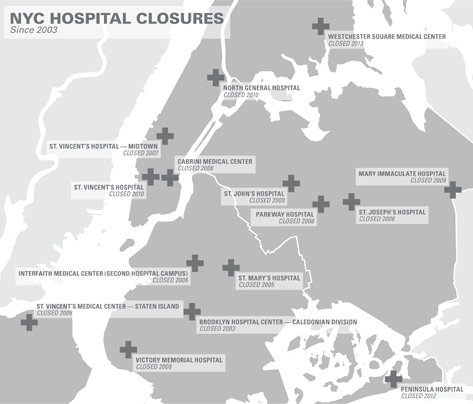 In February New York State received $8 billion in Medicaid funds from the federal government. Gov. Cuomo initially hailed the assistance as “the biggest step forward towards a positive conclusion for our communities, particularly in Brooklyn, that have suffered from diminishing health care services.” But, in another letdown for those struggling to keep LICH and other community hospitals open, none of those funds will be put toward bailout.

Crain’s New York, a publication that caters to the city’s business community, offered the frankest assessment of the deal, noting that funds will go toward Medicaid redesign initiatives that will reduce the number of hospital beds in favor of less costly outpatient services.

“The $8 billion grant will actually chip away at the beloved hospitals so many community groups have battled to protect in recent years,” reports Crain’s. “The blunt reality of the new federal funding is that community hospitals throughout the city will lose beds. Many will be a sliver of their former selves. … Access to more complex medical services will require travel to another neighborhood — or another borough.”

“Will it mean some hospital beds are reduced?” said Cuomo, contradicting previous remarks he made about the funds. “Yes, because that is the point of the exercise. You will have a decrease in beds.”

There is already a shortage of beds in Brooklyn. At LICH last summer, before a judge ordered the hospital’s administrators to cease diverting ambulances, one paramedic compared the crisis spawned by the turning away of patients to that caused by Hurricane Sandy. Meanwhile, a report last year from the public advocate’s office showed that Bedford-Stuyvesant’s Interfaith Medical Center — bankrupt and, like LICH, facing closure — was operating at 106 percent of its capacity. For every 500 Brooklynites there is one hospital bed. For residents of Manhattan there are three.

Despite the already skewed distribution of services, top-of-the line health care is expanding in Manhattan. Thanks to a $100 million donation last spring from billionaire industrialist David Koch, New York Presbyterian plans to establish a new outpatient wing on Riverside Drive. Right in line with the politics of the patron — and those of his brother, Charles — the hospital wing, which will bear the Koch name, will be a nonunion facility.

At a rally outside Interfaith in January, Sharonnie Perry, with the medical center’s community advisory board, wondered aloud where the funds to save Bed-Stuy’s hospital would come from. She jokingly charged James with the task of finding Interfaith their own wealthy benefactor. One hasn’t been swift to arrive. Instead, the Nurses Association, partnering with activists like Perry, are developing a plan that would see the boards of directors at Brooklyn’s struggling hospitals replaced by an elected leadership of staff, patients and local residents.

“The current health care system isn’t working for our communities,” reads an initial proposal, which is still being fine-tuned by NYSNA in conjunction with the grassroots coalition that came together in the fight to preserve LICH and Interfaith. “Decisions about how resources are allocated and what kinds of services we get are made on the basis of costs and revenues. We have no direct say in these decisions.”

If implemented, the plan would institute a cooperative model at Brooklyn’s 14 public and community hospitals, similar to that of existing worker-run co-ops, whose governing boards often interface with the communities they serve. The plan could put increased power to decide how funds are spent in the hands of stakeholders rather than government and industry bureaucrats.

“We’re getting ready to turn things around,” said Perry.

Bill de Blasio’s defense of LICH helped catapult him into the mayor’s office, indicating the political power that the health care unions have built up together with the patients they serve. But it remains to be seen if the coalition they have built can achieve what they are ultimately after: the preservation of the city’s health services. Until then, New York’s hospitals will keep landing in the lap of real-estate corporations.