Brazil’s Dance with the Devil: The World Cup, the Olympics, and the Fight for Democracy
By Dave Zirin
Haymarket Books 2014

Sports reporting has morphed into shoutfests with your morning radio zoo crew hosts Buzzard and Numbnut opining that the coach should get fired and that first-time-long-time caller Joey in Queens doesn’t know what he’s talking about. ESPN’s SportsCenter drones on endlessly in bars with too many TVs and the local paper quotes some athlete cliché repeated a million times before. Nonetheless, when you turn down the volume, sports journalism can elevate athletics as a mirror of society and tell us about the world.

People in the United States are familiar with this story: your hometown pro-sports team might leave if they do not get a package of tax benefits and giveaways to build a new stadium. Your favorite team paints PR gloss about all the jobs created, convention crowds and housing for what amounts to a colossal shell surrounded by a sea of parking lots that sits empty most of the year. Taxpayers foot the bill and the team stays put to antagonize you with their mediocre play until you call in to the radio show demanding the coach gets fired.

But what happens when an entire country goes on a stadium-building binge?

In Brazil’s Dance with the Devil, American sportswriter Dave Zirin visits Brazil, host of this year’s soccer World Cup and the 2016 summer Olympics, and writes of mass discontent. The key villains are FIFA, the notoriously corrupt world soccer federation, and the International Olympic Committee aided by Brazil’s ruling Workers’ Party. The Brazilian government is spending tens of billions of dollars in public funds and gives carte blanche for mega-project developers to raze entire communities. This is money not spent on education, health care and housing. Zirin gets his boots on the ground and talks to the people standing in the way of Brazil’s stadium push.

The author of four previous books on the intersection of sports and social conflict, Zirin is an ardent sports fan. But, he doesn’t buy for a moment that sports is apolitical or should be divorced from the larger society from which it springs. In Dance with the Devil, he interviews residents of Rio de Janeiro favela Vila Autodromo, which sits on prime real estate land next to the 2016 Olympic Park. Threatened with having their community leveled, residents formed a community association to resist the wrecking ball and have thus far successfully fought the mayor, though many favela residents took buyouts or moved into a new housing complex. Their resistance combined lawsuits, activism and a knack for catching the eye of the media.

“Even with TV cameras and media, it doesn’t mean that city officials wouldn’t be violent with us,” Vila Autodromo resident Jane Nascimento told Zirin. “The evicted communities are often evicted with tear gas while TV cameras are rolling.” 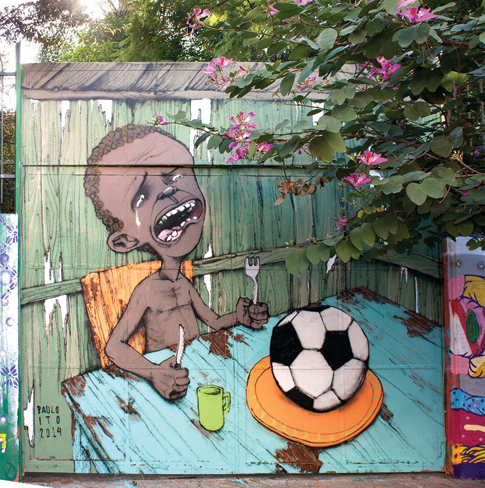 A mural by Brazilian artist Paulo Ito on the doors of a schoolhouse in São Paulo, Brazil. The image went viral on social media. Photo: Paulo Ito/Flickr

Zirin posits that to understand futebol (“foo-chee-bowl”) is to understand Brazil. He provides a concise history of a country that has known slavery (which was not abolished until 1888) and military dictatorship as well a record five World Cup championships. However, Dance with the Devil is not a textbook. It’s ultimately a tale of the choices that sports forces both athletes and the larger society to make.

Zirin’s heroes are athletes like Muhammad Ali, Billie Jean King and Olympians Tommie Smith and John Carlos, who combined great athletic achievement with the courage to use their rare and exalted position in society to speak out against injustice. His villains are jocks like Michael Jordan who think only of turning their fame into million-dollar endorsement deals. In this book Zirin contrasts Brazilian soccer stars Garrincha and Pelé (the first athlete to copyright his name) as symbolic of the tension between “the people” and neoliberalism’s emphasis on wealth and status.

“Becoming an international icon was very profitable for Pelé,” Zirin notes, “but it also had the effect of distancing him from Brazil’s masses. If he belonged to international commercialism, then he could never really belong to them.” In 2009 Pelé took center stage with then-Brazilian President Lula da Silva to announce that Brazil had won the right to host the 2016 Olympic Games. He has also served as a leading ambassador for this year’s World Cup.

In 2013 protests swept Brazil and raged against out-of-control World Cup and Olympic spending but also echoed grievances concerning government graft, racial and economic inequality and middle-class worries about the cost of living. Dance with the Devil does not cover these protests in detail, though the upheaval rattled Brazil’s government. World Cup-related protests and strikes erupted again in May and could overshadow this year’s games, which are slated to run from June 12 to July 13. To understand why, there’s no better place to start than Zirin’s book.