On June 18, nearly an hour before the start of the New York City Rent Guidelines Board’s third public hearing of 2014, the Flatbush Tenant Coalition began rallying outside Borough Hall. “What do we want?” yelled their leader. “Rent freeze! Rent freeze!” the group answered. 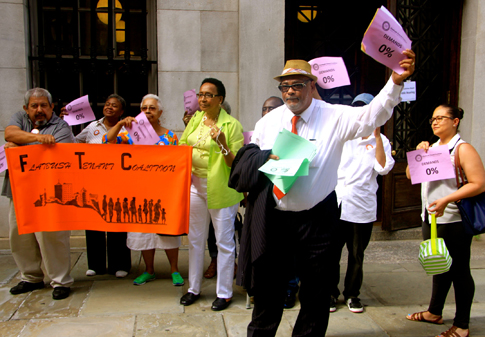 Wednesday’s hearing, held in Brooklyn in advance of the final RGB vote scheduled for tonight, laid bare residents’ frustrations with the pattern of gentrification and displacement that is rapidly changing the borough. Borough Hall was filled to capacity, with more than 150 people in attendance and tensions running high. Tenant testimonies of rent-related hardships were met with cries of support; landlord concerns and calls for sympathy were often met with snickering or comments like, “Join the club!” or, “But you’re still a landlord!”

Brooklyn resident Sylverne Flores, 59, did not testify in front of the RGB, but like many others, she came to support tenants who face the same difficulties she has experienced. Flores lived in a rent-stabilized apartment in Brooklyn for 22 years but became homeless last month. “The landlord decided that the only way to get me out of my apartment so he could rent it for more, was to hoard the checks I kept sending them.” He then changed her locks with no explanation. When her neighborhood, Boerum Hill, became one of the most desirable areas in New York, she says, landlords became more motivated to kick residents out. “Landlords are seizing the opportunity to put out the tenants that have been there for a long time, and they’re doing it by unfair means,” she said.

Multiple tenant testimonies in Wednesday’s meeting pointed to a pattern of landlords using similarly “unfair” — or even illegal — means to evict tenants and flip the apartments for market-rate prices. Brooklyn resident Mario Bello read his wife Andrea’s testimony, and in it, she confessed that dealing with a landlord was tougher than battling cancer in 2012. “I never imagined that after 34 years of living at Hart Street, without ever having any problems with anyone, I was to be thrown out into the street like a rat,” read Bello. “All of this because of an ambitious owner who bought the building and began to make all kinds of proposals and harassing us so that we would leave the building.” In the end, the Bello family was forced to move out. “I plead for justice in the middle of so much injustice. I’m asking for a freeze of the rent increase to protect my family and others like us.” Bello’s demands were met with a standing ovation.

Although not nearly as represented as the tenants, many small landlords also testified. Noticeably absent, however, were representatives of the large real estate and development corporations that are buying up properties in the borough and driving much of the displacement.

Christopher Athineos, a small Brooklyn landlord who owns seven properties, said that he believes that a rent freeze will push small landlords to sell their buildings, potentially to such corporations, and in the end hurt tenants more. “This board is pushing owners over the edge with the recent preliminary guideline range,” Athineos claimed in his testimony. “It’s a shame because ultimately the tenants will be the ones that will get hurt by this. [The RGB is] setting the stage for long-term owners to sell their buildings, take their money, and leave the city.”

Nonetheless, the possibility of a rent freeze provides a sliver of hope for families in desperate need of financial relief. For some, rent increases have forced families to make difficult decisions. Rubin Rojas Salvador, a 10-year-old, told the crowd that sometimes, his father doesn’t buy food or clothes because so much of the family’s income is going toward rent. He added, “What [landlords] don’t see is that they’re ruining our future. That’s how I feel because my dad is trying to save money for my school but someone’s screwing it up. I’m not sure if I’m going to have a bright future!” Like many who were present at the hearing, Salvador recalled Mayor Bill de Blasio’s campaign support for a rent freeze. “Mayor de Blasio,” he declared, “it’s your choice. Make a rent freeze or ruin our future!”

The final RGB vote will be held tonight at 6pm at Cooper Union’s Great Hall.