What’s poetic about a parking lot? Plenty, it turns out, when you infuse a little Shakespeare. The most poetic patch of asphalt in New York City is a municipal lot in the Lower East Side, at the corner of Ludlow and Broome Streets, where the 20th season of a neighborhood summer tradition known as Shakespeare in the Parking Lot is being staged. On the bill is Twelfth Night and Othello, adapted and performed by the Drilling Company and directed by its founder and longtime artistic leader, Hamilton Clancy, who shared some of his thoughts with The Indypendent.

This is the last time the production will appear in the space that has served as its home for so many years: in 2015, the lot will be repurposed into an Andy Warhol museum, a part of the city’s Essex Crossing mega-development project. That endeavor will redraw parts of the Lower East Side, lining sections of Essex and Delancey Streets near the Williamsburg Bridge with the kind of glass towers that have become synonymous with displacement and gentrification in much of the city.

Shakespeare in the Parking Lot, for its part, is searching for a new home in the neighborhood. But that won’t stop the company from having a last, great hurrah in its beloved lot. 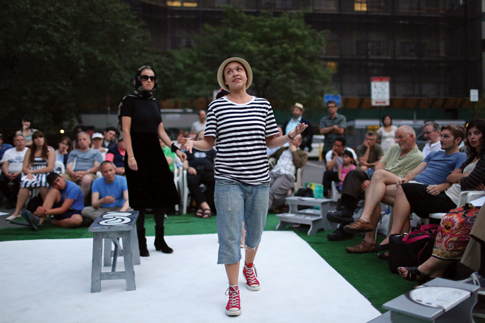 Ashley Marinaccio: Why perform Shakespeare in a parking lot?

Hamilton Clancy: Shakespeare in the Parking Lot has a long history. This is its 20th year. The original inspiration was due to the unaffordability of a theater space. The artists thought, let’s just use the parking lot across the street from the theater to produce our show. Audiences found it fun, and so it continued. One of the things that have been key about Shakespeare in the Parking Lot is that the lot is still in operation while we are doing the play. We figured no one would close the parking lot, so we have always used the empty slots. Sometimes, occasionally, there is a car that’s parked where we need to do the show. When the person comes, we stop the show, move the car out and keep going. It’s an event. Everyone
applauds the person leaving in the show. It’s one of the most beautiful, collective, community moments you can have. While you watch the play, life continues. People come through, cars and trucks pull in and out.

HC: We perform in the municipal parking lot on the Lower East Side. We take one of the greatest neighborhoods in one of the greatest cities in the world and combine it with one of the greatest writers in history. In a way we’ve kind of inverted the Globe Theatre. Everyone who attends Shakespeare in the Parking Lot is a groundling. The way we’ve kept it, there are no presales of tickets. Everyone shows up and has an equal chance of getting a good seat. We have 60 chairs for audience members. If you don’t show up in time you can bring your own chair, throw a mat on the ground or sit on the astroturf we put out in front of the stage. Our audiences are regularly 120 to 200 people.

Artistically, this is the mashup we’re going for: the sound of the city and urban environment clashing with great poetry. We believe if Shakespeare was here today he’d be happy to see things have evolved to where they are today.

AM: What do you hope audiences will walk away with after seeing your work?

AM: What has been your proudest moment as artistic director of the Drilling Company?

HC: We put a bucket out at the end of our production of Hamlet a few years ago. One night someone who had come to every show dropped a letter in the bucket that said the show was one of the highlights of his life at the time and had made a huge difference to him. I read it to all of our casts. It’s the best “review” we’ve ever gotten and the reason we do this work. I am proud that we are creating work in an environment and space where people can discover it — not because they “need” to but because it’s accessible.

AM: What do you see as theater’s role in creating social change?

HC: I believe we’re living in a time — a zeitgeist — where we are moving from conquest to collaboration. As much as we see wars all over the place, I believe there will be fewer in the future. Everyone is trying to figure out how to collaborate and get along. The most important thing we need to figure out is what peace means. To me the theater is a laboratory for peacemaking. It makes us face realities about ourselves and other people and get to know one another better. Theater shows us that our awareness can change and change is possible. There are very few places where this can happen.

Twelfth Night runs through July 26 and Othello from July 31 to August 16. Performances are free and staged at the municipal parking lot at the corner of Ludlow and Broome Streets in Manhattan, Thursday–Saturday, 8pm.