In New York City, space is always the issue. Sure, we have other issues too, but questions about space — how much is available, who owns it, who has access to it — set the parameters for many of the debates, struggles and policies that define this city. Art has always been a part of the city, too. From the first artwork purchased by the city in 1790 — a portrait of George Washington that hung in City Hall — to the progressive-minded Depression-era murals made through the federally funded Works Progress Administration (WPA), and on to the graffiti and guerilla street art of today: the art that appears in all these strange, sometimes cramped spaces has helped shape public life in New York since the earliest days of the United States.

In 2014, city space is more hotly contested than ever, raising questions of what roles public art will take from here on out. Will New York’s public art find ways to channel and reify the incredible creative energies of the city, or will it reflect the board-approved sensibilities of corporate donors? Will it be a source of beauty and gratification for New York’s neighborhoods, or will it become what theorist Rosalyn Deutsche has called a “weapon of redevelopment”?

As space in New York becomes ever more privatized, it’s worth reflecting on the amazing wealth of public art still to be found throughout the city. Here are three public mural projects worth seeking out this summer.

Keith Haring On the Move

In 1980s New York, Keith Haring was all over the place. He made ephemeral chalk drawings in subway stations — street art, before people really called it that — while selling his paintings in tony art galleries; he applied his thick-lined, pared-down drawing style to children’s books and baby’s bibs, as well as to images of queer orgies, genocidal violence and hallucinatory science-fiction scenes. He embodied contemporary art at both its most and least commercial, with a dedicated downtown storefront selling licensed merchandise and a bevy of socially-conscious murals in public. There was a time in New York when you might have been able to stumble onto a new Haring piece, but now, 24 years since his untimely death, only a handful of his public works remain.

Haring’s untitled mural is one of the first things you see when you walk into Woodhull Hospital, a huge, shimmering brick-and-glass compound that looms over the northern edge of Bedford-Stuyvesant, Brooklyn. Haring painted several murals in Woodhull over the course of a week in 1986, as a sort of gift to the hospital (in honor of the AIDS research happening there). The lobby mural is bright and colorful, but with an underlying and distinctly Haring-esque darkness. 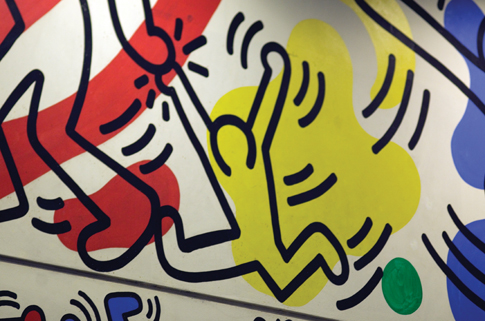 Much of Haring’s work involves the human body in transitory states: people moving and people changing. Because faces are so rarely depicted in Haring’s paintings, these works tend to be all about gut-level, bodily experience. Haring’s scenes find their characters in moments of play, epiphany, agony, orgasm or a combination of all of the above.

The lobby mural includes large bodies that seem to have been twisted and broken, above a procession of primary-colored people in the midst of unidentifiable actions. In any given hospital, most of the art you’re likely to see will probably be something vaguely, unobtrusively pleasant, probably meant as a simple distraction. But Haring’s mural is about the painful as well as the pleasant; as it turns out, Haring’s multifaceted approach to art is just the thing for a place like Woodhull, where illness, health, life and death are all happening at once.

Installed along the walls of the Bronx Community College library, Daniel Hauben’s paintings recall the sun-coated landscapes of the 19th-century Hudson River School; the colorful, old-world populist scenes painted by the baroque-era Brueghel family; and rusty, modernist realism in the Edward Hopper vein. But then, there are the modern details: unmistakable bits of the present-day world peeking through in compositions that could otherwise have felt at home a century or two ago.

In fact, these distinctly old-fashioned works were all made during the last half decade or so: it’s one of the largest public art commissions the Bronx has seen since the WPA era of the 1930s. In one of two larger works installed in the library’s stairwells, the college’s “Hall of Fame” — a colonnade of classically-sculpted bronze busts depicting American heroes — stands against the Hudson River, and in the distance: the Park Avenue Bridge, a chunk of machine-made industrial/utilitarian architecture straight out of the mid-20th century. Amid the autumnal splendor of the Hudson Valley — the lush forests and golden light that has inspired generations of landscape painters — there are the condos and housing projects, the elevated trains and wire fences of the modern-day Bronx. At first, these details might seem like reluctant, perfunctory nods to the present moment, but it’s not that simple. Hauben, who was born and raised in the Bronx, was aiming for timeless romanticism mixed with 21st-century veracity: those train tracks and high-rises are as much a part of this landscape as the rivers and valleys and, as such, every bit as beautiful. 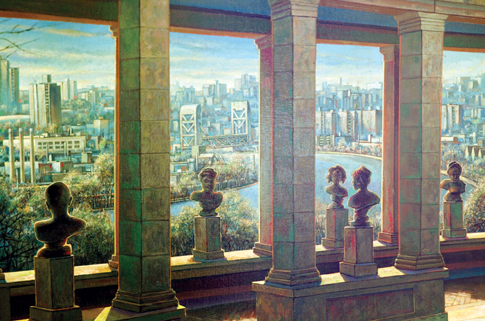 It’s a very particular kind of beauty, though, owing as it does to Eurocentric and aristocratic traditions. One wonders if this mannered style was really the best way to depict a place as ethnically and culturally diverse as the Bronx.

But art means different things in public than it does in private: this kind of art might bespeak a sort of old-money elitism when traded from mansion to mansion, but as something made for the public, these idealized scenes recall other old and noble kinds of ideals: the worth of the spectator/citizen and the richness of public life. After all, we deserve beauty, don’t we?

Not long ago, the WPA murals at the Harlem Hospital Center (HHC) were barely visible: though they represented some of the first major public commissions for Black artists in America, the works were hidden behind walls, left to decay and disrepair, or stuck somewhere out of view. The hospital itself is reported to have rejected some of the initial mural designs back in 1936: as summarized at the time, the “hospital is not a Negro Hospital therefore why should it be singled out for treatment with Negro subject matter?” Hospital administrators said that such murals may prove inappropriate in the long run, with the claim that soon enough, Harlem would no longer be a majority-Black neighborhood.

Now, the murals are almost impossible to avoid: as part of a recent, massive restoration project, images from the murals stretch along a full block of Lenox Avenue in a backlit display five stories high. Indeed, it seems that the murals have turned from a forgotten chunk of the hospital’s history into something integral to HHC’s institutional identity and the centerpiece of its (literal) public façade.

Right now, only one of the original murals is accessible to the general public: Georgette Seabrook’s 1937 Recreation in Harlem. As with many WPA-funded public art projects, this piece packs a subversive political message under charming, colorful imagery. In Seabrook’s painting, Black and white children attend the same schools, Black and white teens go out together on picnics and Black and white neighbors enjoy each others’ company: a radically simple vision of integrated public life.

Meanwhile, the building exterior shows excerpts from Vertis Hayes’s 1937 Pursuit of Happiness: an epic piece depicting the African diaspora and the migration of Black workers from the scorching South to the industrialized North. By juxtaposing scenes of life in an African village alongside images of American hardship, the mural makes powerful allusions to the history of American slavery.

It took a while, but HHC’s 1936 claim is starting to come true: now, more and more white people are moving to Harlem, and local landmarks are threatened by rising rents and gentrification. Perhaps this is why HHC has chosen to highlight this part of its past. As the neighborhood changes, the hospital that once tried to disavow itself of “Negro” subject matter stakes its claim as an essential site in Black American history. You can’t miss it.