When Deborah Cipolla-Dennis moved to Dryden, New York, she and her wife built a house on the 32 acres of land they had purchased. They looked forward to putting down roots in a small, tight-knit rural community that shares the tolerant values of the nearby college town of Ithaca where she works.

However, Cipolla-Dennis soon started receiving visits and phone calls from a representative of the Colorado-based Anschutz Exploration Corporation who urged her to lease her land. He said nothing of fracking — the controversial drilling technique that requires injecting millions of gallons of chemical-laced water and sand deep into the earth to tap hard-to-reach deposits — but Cipolla-Dennis was wary and shooed him away.

Dryden, population 14,000, sits atop the Marcellus Shale, a natural gas-rich geological formation that runs beneath southern and central New York. Anschutz persisted, finding some landholders who were willing to sign leases. By 2009, Cipolla-Dennis and others were alarmed by the oil and gas industry’s interest in their town and began to organize.

“It was truly grassroots,” Cipolla-Dennis recalled. “We were meeting in each other’s living rooms.”

Soon, the Dryden Resources Awareness Council (DRAC) was founded. Members began to gather petition signatures and pressure their town board to adopt a fracking ban. They pointed to the extra noise and heavy truck traffic that accompanies fracking as well as the air and water pollution it has brought to rural areas in other parts of the country, including neighboring Pennsylvania, which has seen a fracking boom in the past decade.

The Dryden town board approved a fracking ban in a unanimous bipartisan vote in 2011. The company quickly sued. In the culmination of a three-year legal battle, on June 30 New York State’s highest court issued a landmark ruling. It affirmed that under state law municipalities are allowed to use their zoning powers to bar fracking from taking place within their boundaries.

“It’s over and it’s amazing,” Cipolla-Dennis said of the legal battle. “People are very surprised that we would buck the system and tell this company ‘no, you can’t come into our town and do this’ and then win in court.”

There are currently 170 municipalities in New York State that have bans or moratoriums on fracking. It’s considered likely that more local governments will follow suit now that they do not have to worry about being sued.

Polls have consistently shown that New Yorkers are about evenly divided on the merits of fracking. In the face of a fierce opposition campaign, the last two governors, David Patterson and Andrew Cuomo, have maintained a temporary moratorium in place while new studies about fracking’s health impacts are carried out.

Cipolla-Dennis said it’s still crucial for the statewide moratorium on fracking to be made into a permanent ban. Fracking opponents who rallied July 8 outside a Midtown luncheon where Gov. Cuomo was slated to speak agreed.

“Air pollution and water pollution doesn’t stop at municipal borders. It doesn’t respect sort of artificial boundaries,” said Alex Beauchamp of Food & Water Watch, an environmental advocacy group. “So ultimately, we really need Governor Cuomo to ban fracking, not just in some towns but in the entire state.”

“I’m afraid that if Cuomo ended the moratorium, there’s enough leases in place so that I think we would be doomed,” added Eleanor Preiss of the Coaltion Against the Rockaway Pipeline.

Cipolla-Dennis said activists in Dryden are in touch with their counterparts around the world who are also fighting to stop the spread of fracking. She spent 10 days in March traveling in central California and meeting with farmers and others who are trying to stop fracking from taking hold in one of the world’s most productive agricultural regions.

Cipolla-Dennis also told The Indypendent that a contingent of Dryden residents will attend the September 21 People’s Climate March in New York City (see previous page). Fracking, she noted, leads to the release of high levels of methane, a greenhouse gas that is 25 times more potent than carbon dioxide. It’s more than past time, she added, to move beyond an energy system based on fossil fuels.

“If we want to be a state looking to the future,” she said, “we need to invest in renewable energy and support that. “ 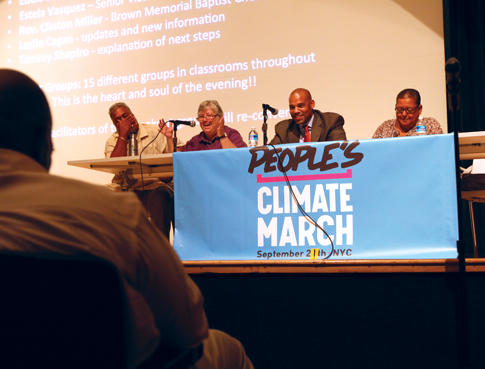 PEOPLE'S CLIMATE MARCH BUILDING MOMENTUM: More than 400 people attended a public meeting of the People’s Climate March on July 7 at The New School. The event’s organizers (left to right: Eddie Bautista of the NYC Environmental Justice Alliance, Leslie Cagan, march organizer for People’s Climate March, Rev. Clinton Miller of the Brown Memorial Baptist Church in Brooklyn and Estela Vasquez of SEIU Local 1199) provided news and updates on the September 21 demonstration, which is expected to be the largest climate change protest in history. For more, see peoplesclimate.org and globalclimateconvergence.org.