When 15-year-old Tariq Abu Khdeir left his home in Florida to begin a six-week summer vacation in Palestine, he expected to visit some of the region’s holy sites and spend time with his family, who he had not seen in 11 years. When he left, Abu Khdeir was the center of an international incident after video of his brutal beating and arrest by Israeli police was posted on the Internet. The incident happened a day after his cousin, 16-year-old Mohammed Abu Khdeir, was kidnapped by Israelis and taken to the woods outside Jerusalem where he was beaten and burned alive.

Abu Khdeir’s story took place amid a larger conflict between Israel and the Palestinians. He was arrested during a protest in East Jerusalem the day after Israeli police found the body of his cousin, who’s death is widely accepted to be a revenge killing for the earlier kidnapping and murder of three Israeli teenagers. Abu Khdeir and another witness dispute the claim by the Israeli government that he participated in the protest and say that he was merely watching from outside his home. And while Abu Khdeir’s story has received considerable attention, it is only exceptional in that he was quickly released from jail and put under house arrest after the U.S. State Department began to pressure Israel. Several other teenagers who were arrested at the same time as Abu Khdeir, including Palestinian-American Mohammed Abu Nie, 15, are still in Israeli jail. And less than 24 hours after Abu Khdeir returned to the United States, Isreali police raided his family’s East Jerusalem home and arrested several members of his family.

Since Abu Khdeir returned home, he has been speaking to the media and elected officials about his experience and how it reflects the oppression that Palestinians living under Israeli occupation face everyday. In late July, Abu Khdeir met with congressional representatives and their staffers at press conference in Washington, D.C. I spoke via phone with Abu Khdeir and his lawyer Hassan Shibly, the director of the Florida branch of the Council on American–Islamic Relations, about their trip to Washington and what the teenager hopes to accomplish by speaking about his experience. 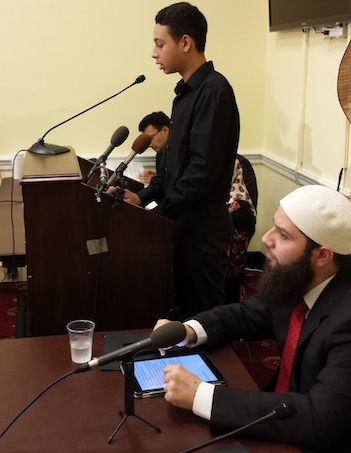 Tariq Abu Khdeir speaking at a press conference on Capital Hill in late July. His lawyer, Hassan Shibly, is seated beside him. Photo: Josh Ruebner, Policy Director for the US Campaign to End the Israeli OccupationAlex Ellefson: Do you think your situation would have been different if it was not caught on video and you were not an American citizen?

Tariq Abu Khdeir:  Yes. If it wasn’t on videotape, then I would still be in jail now. If there wasn’t a video, even though I was American, then I would have stayed in jail. There’s another American kid still in jail. He had no tape so that’s why he’s in jail.

So you think Mohammed Abu Nie is still in jail because his arrest was not recorded on video?

What memory stands out from your arrest and beating?

Are you satisfied with the U.S. government’s effort to secure your release?

Your representative, Congresswoman Kathy Castor, appeared reluctant to even address your arrest and beating. How do you feel about Castor’s effort to secure your release?

Hassan Shibly: Let me jump in on that because Tariq didn’t really deal with that. The gist of it is that the State Department was not impressed with Castor’s help, nor were we. She claimed to do some behind the scenes work but she failed to issue a strong statement condemning the brutal beating he received. When we spoke to the State Department in Washington, they basically rolled their eyes and explained that she really wasn’t that helpful at all.

What was your experience with the congressional staffers on Capitol Hill?

Tariq Abu Khdeir: They felt bad for me. I talked to them and I told them my story and everything that happened. They said that they need to stop the violence and the killing of innocent civilians.

Hassan Shibly: When we met with the congressional representatives, whether it was them or their staffers, you sensed that there was a lot of frustration and outrage at Israel’s treatment of the Palestinians and the slaughter of thousands of innocent lives in Gaza. But you could tell that they felt that their hands were tied. There was little they could do publicly because of the political context and the strong presence of the well-organized Israeli lobby on Capitol Hill.

Tariq, At the same time that you were speaking at Capitol Hill, powerful figures like Senators Barbara Boxer and Harry Reid gathered on the Senate floor to declare their support for Israel. What does that mean to you?

What do you hope to accomplish by continuing to speak?

I feel like the more places I go and the more chances I have to speak out, the more people are eventually going to know what’s happening in Palestine. I also want to send a message to the Palestinians. I want to tell them that they should not give up. We’re already losing Palestine slowly. But we have strong Palestinians and they want their rights no matter what happens.

How has this experience changed you?

I think more about education because the people over there aren’t able to get a good education. How are you going to get an education if they’re not going to let you out to go to a university somewhere like Turkey or Holland? So it’s made me think about what I have in America. I want to get my education so I can be an example.