They used to deliver ice on those horses.” At the Ralph Fasanella exhibition currently on view at the American Folk Art Museum, an elderly tour group reflects on the tiny details of New York City, a bustling 1957 painting by Fasanella made in celebration of the place where he was born, raised and lived his whole life. There are horses in the painting, and also traffic cops and switchboard operators, park benches and fire escapes, parents and children, billboards, bridges and a thousand other things.

Fasanella taught himself to paint while in his early 30s, by which point he’d already been a garment worker, a truck driver, a gas station operator and, importantly, a union organizer. His paintings seem to bear the weight of a dense and demanding life: each Fasanella canvas is its own richly populated world. Fasanella’s left-wing politics, born out of his days in the labor movement, are a deeply felt presence in his works right through Farewell Comrade/End of the Cold War (1993-1999), his uncompleted final painting. In it, Lenin’s oversized corpse lies surrounded by teeming crowds, and by books and placards named with progressive heroes (Upton Sinclair, Arthur Miller, Mother Jones); Gorbachev, Clinton and the Pope all make appearances; hapless subway commuters read newspapers in which political power struggles are treated as a giant ball game (“YANKS WIN BIG! USSR FALLS!”).

It would be easy, really, to dismiss much of Fasanella’s work as cutesy, sentimental nostalgia. For example: his 1970s paintings of Lawrence, Mass., depict the great workers’ strikes that happened there in 1912 — two years before he was even born. But beneath the bright colors and winsome little characters, there’s a complex, cranky and mournful political vision at work. In one 1976 painting, giant birds and multiple grinning Nixons hover above marching protesters, a baseball diamond, candy-colored newspapers, funeral processions and a massive pink telephone. The painting’s title? Watergate, of course. Funereal imagery comes up a lot in these paintings, often in the form of memorials to slain civil rights leaders. Fasanella’s scenes tend to include sign-waving demonstrators, dwarfed by looming symbols of power: stately cast-iron domes, ornate church steeples and endless newspaper-headline ziggurats. In a piece about the death of JFK, there’s even what looks like a combination brothel/Catholic church, manned by a congregation of robed Klansmen. In such works, it seems that Fasanella is questioning the nature of power in 20th-century America, with governmental, religious and social institutions coalescing into strange, new monsters.

Also currently on view at the museum is an exhibition showing the obsessive, explosive, oddball experiments of Willem van Genk. Like Fasanella, Genk was an old-time left-winger — though it seems he eventually grew distrustful of any ideology whatsoever — but his works do not share Fasanella’s brand of earthy humanism. Using complex collage techniques and intricate line art, van Genk shows us Soviet battleships, Eastern deities, film reels, fighter planes, locomotives and illegible bits of text; he finds a sort of raw fascination in the mechanisms of power. As a point of reference, compare Fasanella’s depiction of the Triborough Bridge — as a soft, sponge-like, pastel-colored thing — with van Genk’s Brooklyn Bridge (1960): hard-edged and imposing, with not a person in sight. 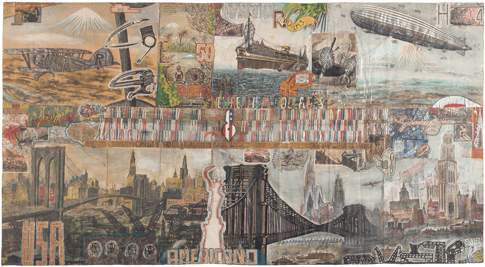 After decades of struggling to get his artwork shown, Fasanella eventually achieved more widespread recognition. His paintings can be seen in libraries, museums and universities around the country; the city of Lawrence even declared a “Ralph Fasanella Day.” This exhibition, then, is a chance to go deeper. Beyond Fasanella’s bright colors and fun details, there’s a dark and deeply personal sort of dread. In his art, Fasanella’s wistful memories of populist glory days are offset against a forward-looking sadness, an encroaching sense of injustice and corruption in an increasingly stratified America.

Looking at New York City, the tour group talks about how the streets of Manhattan aren’t so different now from how Fasanella depicted them 57 years ago, except that where there used to be mom-and-pop businesses, there are now impersonal chain stores, and where there used to be working-class families, there are now luxury apartments and empty condos. Fasanella intended the painting as an apolitical homage to his hometown — it was the mid-fifties, after all, and he was getting in trouble for his Communist leanings. But even without overt political references, that old lefty populism still comes through. At a time when, it seems, so many New Yorkers are being displaced by the movements of capital, it helps to see the city envisioned as a loud, busy, colorful place, one whose life force comes from ordinary people and everyday concerns.