During his presidential campaign, French President François Hollande declared: “My enemy is finance.” He received a standing ovation from a population that felt that traders on Wall Street were to blame for the country’s stagnant economy.

Three years later, Hollande’s government has come a long way. In August, hoping to woo a gathering of CEOs, his prime minister, Manuel Valls, professed: “I love business!” The declaration came days after he had reshuffled his cabinet for the second time in less than six months, firing Economy Minister Arnaud Montebourg, an outspoken critic of austerity measures. Montebourg was replaced by a conservative banker, Emmanuel Macron.

Unlike other European countries such as Greece and Spain, France at first steered clear of slashing public spending to reduce debt. One of Hollande’s flagship reforms was to raise taxes on the wealthy — a measure he hoped would patch up some of the holes in France’s budget when he introduced it in 2012.

The move earned him undying ill-will from France’s ultra-rich, but it wasn’t enough to beef up the budget on its own. And while unemployment in France is on the rise and an increasing number of people are living below the national poverty line, pressure from Berlin and Brussels to meet EU debt and deficit reduction standards has been relentless.

In the 1990s, Germany came on board with the eurozone project — which was championed by François Mitterrand, the only other Socialist president in French history — on the condition that members’ national debt be capped at 60 percent of GDP. France has been one of the EU’s white elephants ever since, with its debt climbing over the EU norm since 2000 and reaching over 90 percent of GDP today. With Germany and the rest of Europe at their heels, the Socialists now find themselves in a mess of their own making.

Just as President Barack Obama has tried to strike a so-called “Grand Bargain” on budgetary issues with Republicans — the debt held by the United States, for its part, is more than 100 percent of GDP — Hollande has made similar concessions to the financial right.

“It’s not austerity,” Hollande recently said at a meeting at the Organization for Economic Cooperation and Development (OECD), “it’s modernity.” France’s 2015 budget, unveiled in September, paints a different picture. It slashes public spending by $27 billion, cutting down family and employment benefits. The government plans to save $63 billion over the next three years, and most of it will come out of the state’s welfare program. Though the European Commission may find that it’s not enough, for many in France, it goes too far.

One of the five major unions in France called for a general protest against the budget in mid-October. Tens of thousands marched in the streets, but their numbers did not come anywhere near those of previous mass movements. The four other unions ignored the march. 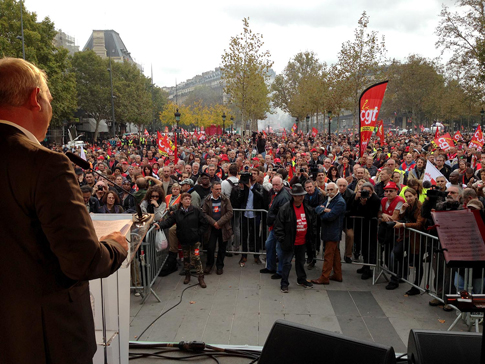 “There is a certain degree of embarrassment on the left, and they have never been this splintered,” says Noëlline Castagnez, a historian of the Socialist Party. The left-wing political landscape looks about as grim as a winter day in Normandy: Some of the unions are cozy with the Socialists, student mobilization is weak after its failure to stop university reforms in 2009, the French Communist Party has hit a historical low point, the Ecologists are divided among themselves, and the radical left, the new “Front de Gauche,” is unclear in its program at best.

Meanwhile, the Socialist Party is ravaged by internal dissent. In September, the party’s left-wing faction was muzzled in favor of a new cabinet of Hollande loyalists, called in to implement structural reforms without kicking up a fuss.

The rift between reformists and revolutionaries has always existed within the Socialist Party. Though it claimed to be Marxist up until the 1970s, it has since drifted toward the right. “If you look at the Socialist Party’s latest statement of principles, you will see that social liberalism is never quite named, but it is there. The text is far from revolutionary,” says Castagnez.

With a legacy of revolt — ranging from the 1789 and 1848 Revolutions to the Paris Commune in 1871, and more recent landmarks like the 1968 student movement — France was long seen by the world as the spiritual home for street protests. Though you can still stumble across a protest on any given Sunday in Paris, they are a pale shadow of what used to be.

Since then there has been a smorgasbord of protests in France, but none have been successful in achieving serious political results. During Hollande’s tenure, the largest protests have been reactionary: the conservative anti-gay movement, Manif Pour Tous, or “Protest for All,” came into bloom in opposition to his same-sex marriage bill in 2012. Despite participants’ best efforts, the bill was passed. Faith in the power of mass popular protest may now be passé, and the failure of Manif, according to sociologist Anne Salmon, is key to understanding why. “The real issue here isn’t whether people are out protesting or not. Because many people are very ready to go down to the street. The real question is how their actions would translate into a real political alternative,” Salmon says. 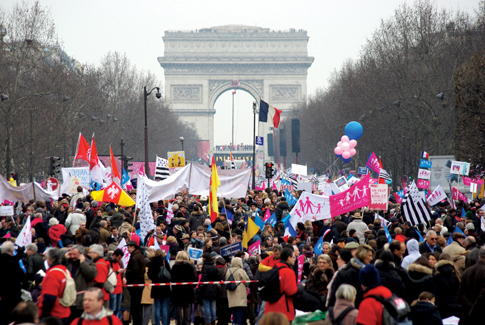 Hundreds of thousands of people protested without success against France’s same-sex marriage bill in 2013. Their disenchantment has fed the strength of the far-right National Front. Photo: Olevy/Wikipedia

Marching in the streets by the hundred thousand only to be ignored by the country’s leadership is frustrating — and fodder for the National Front. The anti-immigrant party headed by Marine Le Pen, former presidential candidate Jean-Marie Le Pen’s daughter, has chalked up unprecedented success. In local elections this spring, voters snubbed the Socialist Party and its main opposition party, former president Nicolas Sarkozy’s UMP. The National Front surpassed everyone’s expectations by winning a dozen cities.

“The radical right is at the gates of power,” Prime Minister Manuel Valls said recently in reaction to September polls that indicated Marine Le Pen might be a popular candidate for presidential elections in 2017. According to Salmon, the National Front’s success has a lot to do with France’s feelings of impotence. “When you go out onto the streets and shout and nothing happens, that’s humiliating. So when you see the National Front winning, it’s impressive. At some point, the feeling of success is important,” says Salmon.

Marine Le Pen, leader of the anti-immigrant National Front, could be the big political winner in France. Photo: ansa.it

Fanning resentment toward Brussels and Berlin, the National Front taps into French feelings of dashed “national dignity.” It is particularly popular with young French people: according to poll data, a third of voters under 35 cast their ballots for the National Front this spring.

For decades, France has faced mounting pressure to get on board with the neoliberal program. The French have thus far managed to sustain a generous welfare state, but the writing on the wall in the rest of Europe suggests it may not last long. A recent OECD report, released in October and publicly hailed by Hollande as he sat with the leaders of the world’s financial institutions, says France’s prospects are good — as long as it jettisons more of its labor regulations and social spending.

Hollande is the most unpopular president on record, with only 13 percent of French people claiming to have a favorable view of the Socialist leader in late September. This is because he can afford to be. The French, looking at the rest of Europe, are met with similar and discouraging prospects abroad: Spain’s unemployment, Greece’s mounting extremist right, Portugal’s buoyant debt.

“You know how to boil a frog?” This is how a veteran French journalist responded when asked whether any mobilization against austerity in France could be expected. “You put the frog in cold water. It won’t try to jump out, because as the water gets warmer slowly, it won’t notice. Until the water boils that is, and then it’s too late.” Across the political spectrum, most would agree that the water temperature has been inching from lukewarm to hot. The French frog has always been highly self-conscious. It’s possible it might notice after all and jump.