Tens of thousands of people marched throughout Mexico in early October to demand justice for 43 missing students from the Normal Rural School at Ayotzinapa. The student teachers were last seen being herded onto buses after police killed six of them in two shooting incidents.

The marches came amid the discovery of several shallow mass graves near the location where the student teachers were last seen. The graves contain dozens of burned and maimed bodies — Mexican authorities say months of DNA testing may be necessary to determine their identities.

But the discovery has led to shock and horror across all of Mexico, fixing the nation’s attention on the plight of the missing students now feared murdered in the most brazen act of political violence in more than a generation.

In Mexico City, parents and students from the teachers’ college in Ayotzinapa led an October 9 mass demonstration, protesters carrying signs and banners with the names of the missing students and crosses with the names of those killed in the police shooting, which also left 25 injured. Many are using the slogan “Hasta encontrarlos” (“Until we find them”) in their organizing efforts and as an expression of hope that some of the students may still be alive.

Parents of the victims and other students suspect that police turned the 43 missing students over to the local criminal organization Guerreros Unidos. Recent investigations indicate that Guerreros Unidos has ties to local politicians, including the mayor of Iguala, who has been in hiding since the shootings took place.

An international outcry has forced the federal government to send in the army and federal police to look for the missing students. More than 20 police, as well as some Guerreros Unidos members, have already been taken into custody, but have yet to face criminal charges over the murders and kidnappings.

While authorities work to identify the bodies and locate the Iguala mayor, protests, mobilizations and blockades continue across the country. The left wing of the national teachers’ union and the rural teachers’ colleges have called for an indefinite strike until the missing students are found. 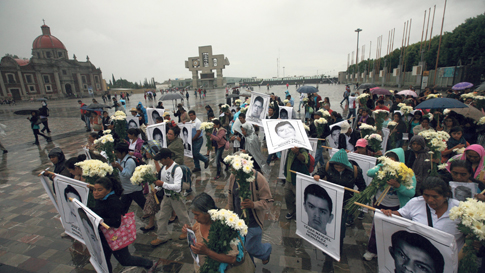 Demonstrators in the center of Mexico City carry photos of the 43 missing students. Photo: azcentral.com

The Raúl Isidro Burgos Normal Rural School at Ayotzinapa is near Chilpancingo, the capital of the state of Guerrero. The school is a teachers’ college established in 1926 as part of a national program to train teachers and extend public education to rural communities throughout Mexico. During the presidency of Lázaro Cárdenas in the 1930s, a socialist curriculum was adopted throughout the school system.

Although the curriculum was slowly phased out at other schools, Ayotzinapa is one of the few schools that preserved it. The school is well known for this left-wing legacy, and some of Mexico’s best-known radical leaders and guerrilla fighters, including Lucio Cabañas Barrientos and Genaro Vázquez Rojas, studied there. Thus, the government often refers to the school as a “breeding ground for guerrillas.”

The school has a strong tradition of resistance and a militant student union. The Federation of Socialist Rural Students of Mexico (FECSM) organizes the curriculum and runs the school together with teachers. Chronic underfunding, however, has threatened the Rural Normal School of Ayotzinapa. For years, the FECSM has fought for more funding and opposed efforts to reform the school and its curriculum, often blockading highways and clashing with police.

Graduates from Ayotzinapa have also been the backbone of the National Coordinator of Education Workers (CNTE) — the left-wing section of the national teachers union — in Guerrero state, where opposition to the neoliberal education reform agenda of the ruling Institutional Revolutionary Party (PRI) has been strongest.

Students from the Normal School at Ayotzinapa are no strangers to harassment by police, given their history of resistance, but the attack they suffered on Friday, September 26, is unprecedented. Police violence on this scale hasn’t been seen in Mexico since the massacre of Tlatelolco, when army forces killed and disappeared university students on the eve of the 1968 Olympics.

It is difficult to establish exactly what took place on the night of the 26th. Testimonies from survivors have only recently begun to surface via social media, radio interviews, YouTube channels and online news websites. However, the general picture that has emerged is deeply disturbing.

During the day, student teachers converged on the city of Iguala to raise funds to attend an upcoming student congress. They canvassed the city, stood on street corners and went from house to house, collecting donations in cans. The activists also made their way to Iguala’s central plaza, where the mayor’s wife was holding a political event, but local police barred the students from entering, so the students retreated to the bus station.

Once at the bus station, the student teachers seized three buses from a local bus company and convinced the drivers to cooperate with them. As the students left the bus station, several police vehicles followed them, and once they reached the outskirts of the city, the police blocked the road and surrounded them. Then a small group from the bus at the front of the caravan got off to negotiate with police to let them through.

Chaos ensued. Without warning, police opened fire on the caravan of buses, shooting at the students who had gotten off to negotiate and directly at the bus windows. The student teachers scattered to seek cover from the gunfire.

When the shooting stopped, the activists began exiting the buses with their hands in the air, telling police that they were students, and that some of their classmates had been injured and were bleeding badly. Police opened fire again.

Again, students sought cover — on the ground, between and under the buses. Once the shooting stopped for a second time, 17 students had been injured, three critically. Police then corralled 43 of the students into police trucks and took them from the scene. The students left behind called an ambulance for the injured, and one police truck even escorted the ambulance to the hospital.

As soon as the police left, people from the neighborhood began helping the students, treating wounds and offering support. Local teachers began calling newspapers, and the student teachers reached out to their classmates to join them for a press conference.

Meanwhile, in another part of Iguala, police confused a bus belonging to a local third-division soccer team, the Avispones of Chilpancingo, with the buses of the student teachers and attacked it, killing three people — one soccer player, the bus driver and a woman who was passing by.

It was midnight by the time the press conference began. Several media outlets were present, and there was a strong turnout from teachers and townspeople. A large group of students from Ayotzinapa had also made their way to Iguala — two hours away — to join their classmates.

But the worst was yet to come. While the press conference was under way, an unmarked pickup truck and a police vehicle showed up and immediately opened fire on the crowd gathered at the scene. Two students died instantly, and as the crowd scattered, the gunmen directed their fire straight at the students attempting to escape.

After this second shooting, the survivors recounted a harrowing scene. In his testimony, Omar García, a survivor of the second shooting, said he and his classmates ran toward the city as soon as the unmarked vehicle opened fire. Soldiers from a military convoy stopped them a few blocks away, and when the students asked for help, the soldiers told them: “Shut up, shut up. You were looking for trouble. You wanted to confront them. Well, face them. Face them and handle it.”

Marcos explained how he and a few classmates carried a student named Edgar, who was badly injured from a bullet that entered his cheek and shattered his teeth, into the city. Taxi drivers refused to give them a ride, and when they finally found a hospital, health care workers were afraid to help them because they feared for their own lives.

After helping to ease the bleeding and stabilizing Edgar, the nurses left the hospital. Marco and his classmates remained there until 2am, when a group of soldiers burst in with their guns drawn. These soldiers also refused to help them and left. At about 3am, they forced a taxi driver to take Edgar to another hospital. Marco and the rest of his group then sought refuge in a vacant lot, waiting for dawn while rain soaked them.

When morning broke, the students began to regroup at the local police precinct to demand the release of the 43 classmates taken in the police trucks the night before. Police, however, told them that nobody was being held in custody and no arrests had been made the night before. Looking for answers, students returned to the scene of the shooting. There, they found the body of Julio César Mondragón, one of the students taken by police the night before. His face had been flayed, and his eyes had been removed from his eye sockets.

The shootings in Iguala and the case of the disappeared students from Ayotzinapa have shaken all of Mexico. Pressure from parents and classmates of the missing students have led to a political crisis in the Party of the Democratic Revolution (PRD).

Historically, the PRD was an opposition party to the PRI, now back in power under President Enrique Peña Nieto. But the PRD has degenerated considerably over the last two decades. For example, Guerrero governor Ángel Aguirre Ribero belongs to the PRD, and his administration has been tainted by a series of political scandals linked to corruption and organized crime.

Iguala Mayor José Luis Abarca Velázquez also belongs to the PRD and has been in hiding since the shootings took place. The left wing of the PRD in Guerrero had pressed charges against him in 2013 for his associations with the Beltrán Leyva drug cartel, but the general prosecutor’s office never followed up on the accusations. New investigations now link him to the criminal organization Guerreros Unidos. 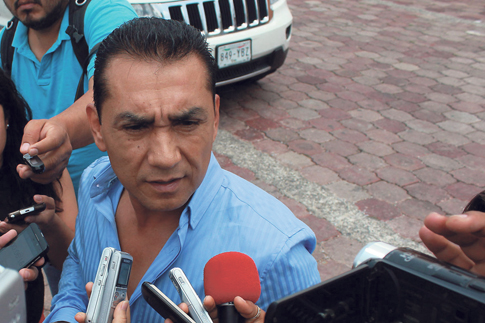 Meanwhile, President Enrique Peña Nieto’s response to the crisis in Iguala has been less than inspiring. On October 9, while thousands of people marched in the streets of Mexico City to demand justice for Ayotzinapa students, Peña Nieto was in Monterrey inaugurating a sports complex and taking selfies with the crowd.

The PRI undoubtedly hopes to take advantage of the political crisis shaking the PRD in the wake of the Iguala shootings. But the 43 missing student teachers and the nine mass graves discovered so far also reflect poorly on the president and his party, since they have tried to push the issue of violence and security to the margins while courting foreign investment with new neoliberal reforms.

Furthermore, the PRI finds itself in a political bind after student strikers at the National Polytechnic Institute (IPN) in Mexico City rejected a government “non-offer” to resolve their grievances at the increasingly privatized public institution. Striking students at the IPN have begun to fuse with other protest movements, including those seeking justice at Ayotzinapa.

The Insurgent People’s Revolutionary Army (ERPI) guerrilla group has also thrown its support behind the student teachers from Ayotzinapa and has created a special brigade to “settle accounts” with the Guerreros Unidos criminal organization. Thus, the political panorama of Mexico has become increasingly complex. An array of social movements and struggles are developing organic connections while corrupt and ineffective politicians offer nothing more than empty rhetoric — or worse.

For now, though, all eyes are on Guerrero, where the cry of grief and rage rings louder than ever.

An earlier version of this article appeared at socialistworker.org.