These have become the clarion calls of the struggle for justice for Michael Brown. After the unarmed black teenager was shot by a white police officer in Ferguson, Missouri, on August 9 and his body was left on the street for more than four hours, protests erupted. Those initial expressions of grief and rage have since grown into an organized national movement.

During the weekend of October 10-13, thousands of St. Louis residents and out-of-towners took part in acts of resistance dubbed “Ferguson October.” Demonstrators demanded the indictment of Brown’s killer, Darren Wilson, and responded to systemic issues underlying the murder — racial bias and lack of accountability in law enforcement, normalized violence against communities of color, the militarization of the nation’s police departments and more — with rallies, direct actions and civil disobedience. Dozens were arrested.

Tensions remain high in Ferguson. The grand jury deadline for a decision about Wilson’s indictment is January 7, and as suspicions about the legitimacy of the process swirl through the community, people return day after day to protest at the local police station. In the recent words of one Ferguson resident, “No one is going to rest until we get justice.” 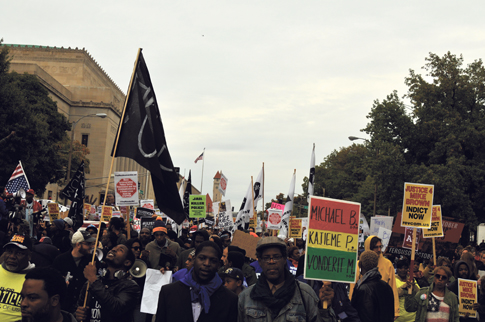 Thousands participated in a “Justice for All” march in St. Louis on October 11. The march wound through downtown St. Louis and concluded with a rally at Kiener Plaza. The crowd numbered as many as 3,000 people and included local and out-of-state activists, people of faith, youth, labor union members and more. 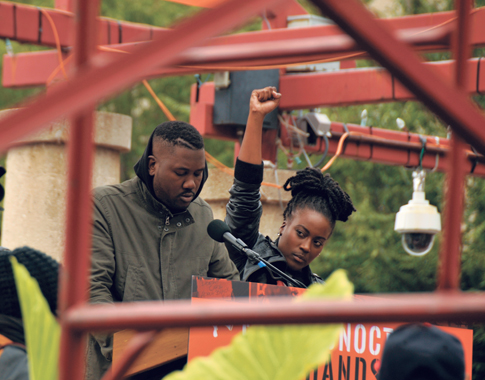 St. Louis hip-hop artist Kareem Jackson, known as Tef Poe, speaks at the rally that followed the march while Ashley Yates, of Millennial Activists United, raises her arm in a Black Power salute to the crowd. Both have emerged as young leaders in the struggle for racial justice in the wake of Michael Brown’s death. 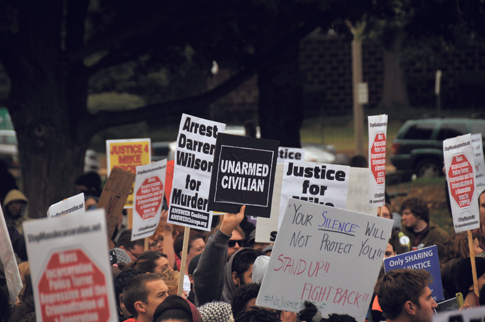 Messages at the march aired a multitude of grievances. 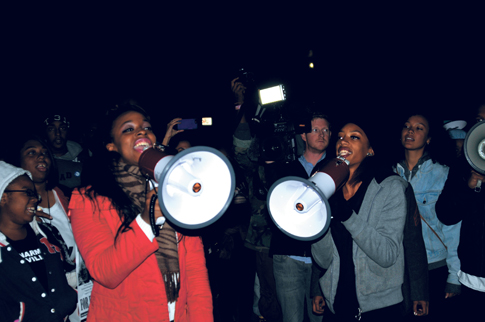 On Saturday, October 11, activists marched from the Michael Brown memorial by Canfield Green Apartments, where he was shot, to the Ferguson police station. Young and working-class black people emerged as leaders on the ground in Ferguson after Brown’s death, coordinating much of the local response and challenging established civil rights figures and institutions in the process. 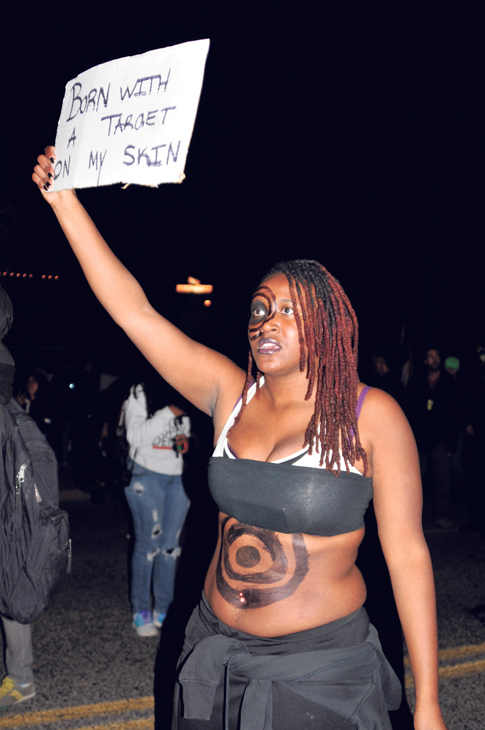 A young woman decries being seen as a target because of her brown skin. 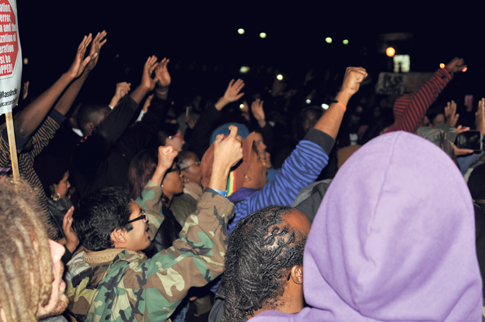 In what has become a defining gesture of the Ferguson protests, participants in the march raise up both arms. 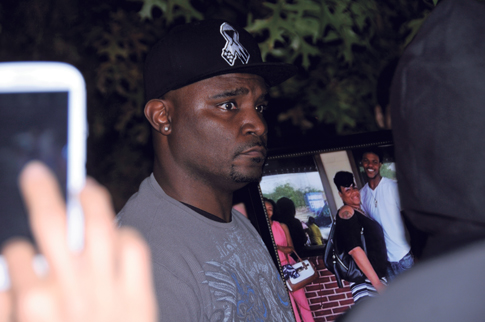 On October 12, protesters gathered near the convenience store where 18-year-old Vonderrit Myers Jr. was killed by an off-duty police officer on October 8. Here, Vonderrit Myers Sr. holds a photograph of his son and the teen’s mother. After the rally, protesters marched through the streets and ended the night with a sit-in at least 1,000 strong at St. Louis University. Seventeen others were arrested that night after doing a sit-in at another convenience store. 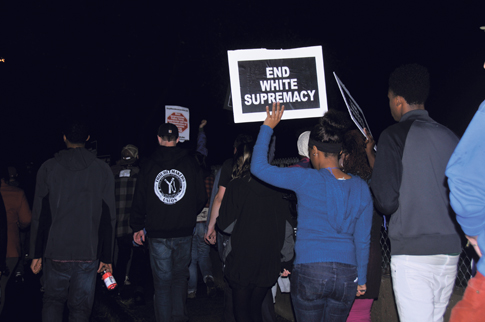 Protesters march from the store on Shaw Avenue where Vonderrit Myers was killed to the center of the Shaw neighborhood in St. Louis. 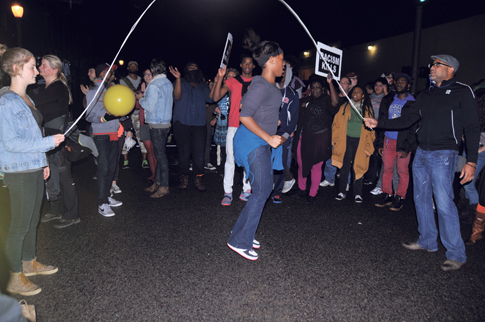 In a twist on the now-popular Ferguson protest chant, “They think it’s a game, they think it’s a joke,” marchers block an intersection in the Shaw neighborhood by playing jump rope and hopscotch. 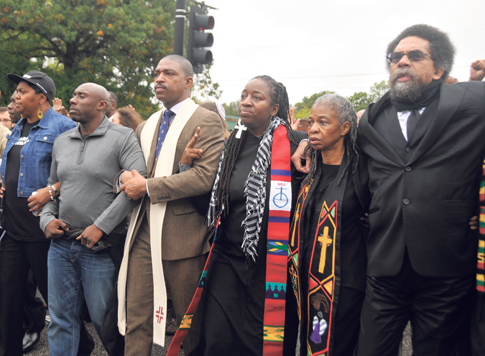 October 13 was dubbed by Ferguson October organizers as a “Moral Monday” of civil disobedience, alluding to ongoing “Moral Monday” actions that began in North Carolina last year and have since spread to other states. Clergy leaders and others, including philosopher Cornel West, led a march to the Ferguson police station on the morning of October 13. 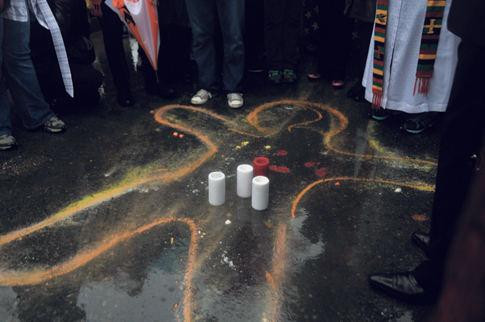 Protesters drew an outline of a body in white and yellow chalk in the Ferguson police station parking lot to memorialize Michael Brown. 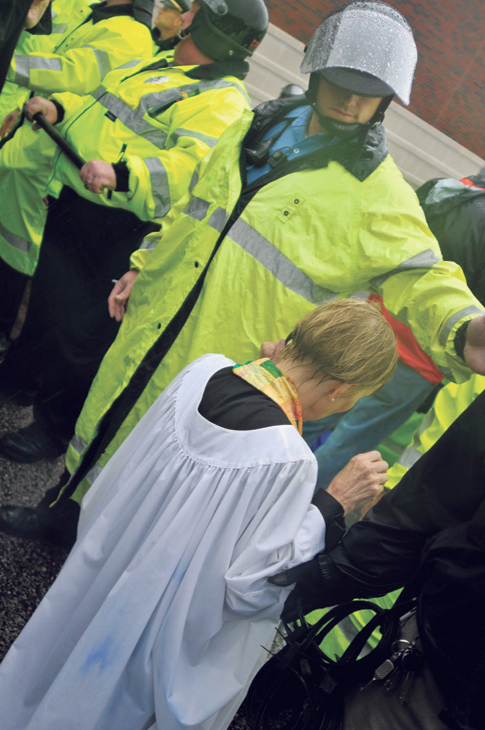 Members of the clergy kneeled in front of police in riot gear at the Ferguson police station, praying and asking the police to repent in the pouring rain. Some participants got through the line of police and more than 40 were arrested.