When 92-year-old Annemarie Mogil left her home of more than 30 years, it was important for her to find a residence where she could live out the rest of her days in peace. Which is why she was elated when she signed a lease last year at an assisted living facility that overlooks Brooklyn’s Prospect Park.

The Prospect Park Residence offered laundry and meal services, arts and crafts and outings to the local botanical garden and Brooklyn Museum.

“I feel that at 92, I lived a full life and an active life and helped a lot of other people. It’s my time now to rest and relax and have some comfort,” Mogil said.

That, however, is proving to not be so easy for Mogil and the seven other remaining residents who have been fighting in court for the past six months to stay in their homes. Their battle with their landlord, Haysha Deitsch, has become a symbol of the clash between Brooklyn’s rampaging real estate market and the needs of the borough’s longtime inhabitants.

The trouble began in March, five months after Mogil moved into the nine-story building. She and its other 121 elderly residents were stunned when Deitsch announced that he was closing the facility and gave everyone 90 days to move out. He had bought the building in 2006 for $40 million and was now selling it for $76.5 million to Sugar Hill Capital Partners, which planned to convert it into luxury condos.

A spokesman for Deitsch told The Indypendent that the Prospect Park Residence had been operating at a loss since 2009.

“It has always been the intention of the owners and the operators to build a thriving concern there,” said Deitsch’s spokesmen Paul Larrabee. He added that the financial losses stemmed from issues like maintenance, upkeep of the building and a “fixed-fee structure” that would not support the costs.

However, Deitsch’s claim that he was operating the building at a loss caused many of the residents’ family members to question why he applied in 2012 for a license to operate the building as an assisted living facility. The family members and local politicians have expressed anger at the Department of Health’s (DOH) “rubberstamping” of both the license application and the request to close the facility.

“I can’t believe the Department of Health just gave him the license and then took it away without checking into it. Shouldn’t alarms have gone off that something was wrong here? It’s mindboggling,” said Joyce Singer, whose 90-year-old mother is one of the eight remaining residents. “It’s like no one is minding the shop.” 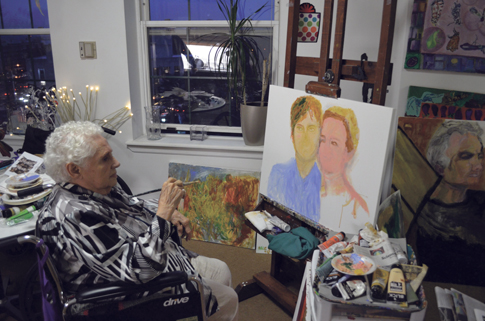 Duped by The Landlord

Residents and their family members say that Deitsch pressured them in early 2013 to quickly sign an agreement to accept the DOH license. Unlike a standard lease agreement, which requires the owner to go through a costly housing court battle to evict a tenant, the DOH licensing agreement allows the operator to close the facility, provided that residents are given at least 30 days notice.

“We were told: ‘You’re mother is going to have to leave if you don’t sign this,’” said Singer. “I wish, in hindsight, that we had gotten a lawyer at that point. We had leases. And going along with getting this license from the Department of Health, we were pushed to sign these residency agreements, which we really didn’t understand.”

“I think that was his plan. To get the department of health license, which he knew he’d get quickly. And I really think he thought he was going to kick everybody out,” she added.

In May, Singer’s mother and the handful of other holdouts, who are all in their 90s, sued Deitsch and the DOH in order to block the evictions. The lawsuit, filed in state Supreme Court, accuses the owner of not following the health department’s closing protocols by failing to help residents relocate and by shutting off services for residents who still live in the building and are paying rent, which is upwards of $4,000 a month. 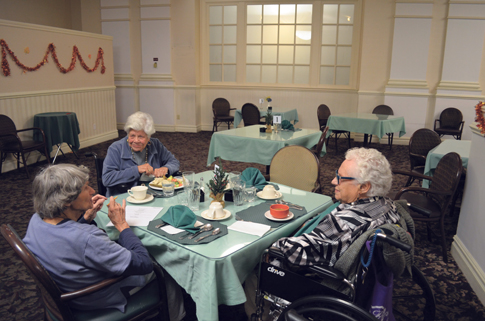 Three of the eight remaining residents of the Prospect Park Residence share a meal in the otherwise empty dining hall.

Indeed, many of the residents, their families and local politicians wonder why the DOH approved Deitsch’s license in the first place. The facility operated for years without a license and a subpoena obtained by The Indypendent shows that the state agency was aware of this as early as 2009.

The DOH refused to comment in response to a request by The Indypendent.

The judge, Wayne Saitta, has ruled in favor of the residents several times by ordering that services and living conditions in the building be restored. After Deitsch announced that he planned to close the facility, the residents say that many of the activity rooms were closed, the staffing was reduced, they were served rotten food and there was no air conditioning or hot water in the summer.

“[The owner] never gave an explanation for anything. I think we’re convinced it was just to make everybody miserable,” said Singer.

In August, the judge visited the residence and ordered the operator to resume serving meals in the main dining area instead of the cramped side room across from the bathrooms.

City Councilman Brad Lander, who represents the area where the building is located, lambasted the DOH and the governor for not properly overseeing the facility.

“We have long known that the owner of Prospect Park Residence is morally bankrupt, and values his own profit over the health and safety of these frail elderly residents. Governor Cuomo and the state Department of Health are required — by law, by court order, and by simple human decency — to take action to protect them,” Lander said in a statement.

Some of the residents’ family members said the deteriorating conditions and the threat of eviction might have contributed to the death of six elderly residents who died in the building since the owner announced he wanted to shut it down. Mogil’s neighbor, Jack Stock, died in the residence in September and Stock’s former personal aide said she blames Deitsch for his death.

“It’s because when they gave notice to everybody, it was so short. Everybody took it in and everybody started to get ill and sick and die. Jack was one of them,” said Salima Hosein, who was Stock’s personal aide for 3 years. “I was there for Jack’s last breath. It was so sad. I cried, I cried, I cried. I couldn’t deal with it for a month.”

Deitsch is involved with several legal battles related to the property. Apart from the lawsuits filed by the residents, Sugar Hill Capital Partners is now suing Deitsch for not clearing the residents out quickly enough and is trying to recoup its $7.65 million deposit. Deitsch is also the target of six wrongful death suits, one of which was brought by the family of the famed “Kung Fu judge” John Phillips, who died in the residence in 2008.

John O’Hara, the lawyer representing the families in the wrongful death suits, said the residence advertised itself as an assisted living facility for years without obtaining a license from the DOH. O’Hara said that he was surprised to learn, after filing the wrongful death suit in 2010, that it was an unlicensed facility.

“I just couldn’t believe it,” O’Hara said. “This is like if your mother is sick and you take her to a hospital, you check her in and she dies. And then you sue the hospital and you find out they’re not a hospital. I mean, it’s just incredible how Deitsch gets away with this.”

Outside Mogil’s apartment, there is no foot traffic in the hallways. On her floor, she only has one other neighbor. Other floors are completely unoccupied, dead quiet and dark. The activity rooms, where the residents used to gather for music, art lessons and other activities are eerily empty; their windows are sprayed over with a semi-opaque paint that looks like winter frost. 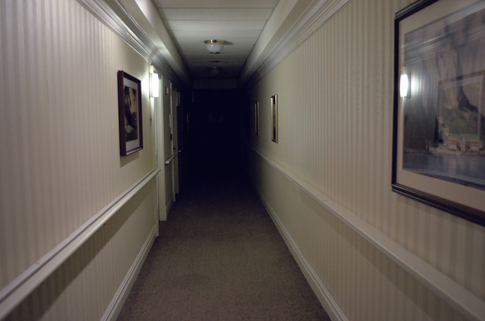 Many of the floors of the Prospect Park Residence are now unoccupied and dark.

Joyce Singer’s mother, Alice, who at 90 years old is the youngest of the eight remaining residents, said she could see why a developer would be eager to buy the property.

“It happens to be a very pleasant room,” she said of her one-bedroom unit overlooking Prospect Park. “And all they would have to do is put a stove in it and it’s a condominium. And they’ll get millions for it.”

The lawsuit was recently pushed back until January, giving the remaining residents at least a few more months in their homes. However, Jason Johnson, who is one of the attorneys representing the residents, said that because the lawsuit is only challenging the deterioration of services and the adequacy of the closing plan, it is unlikely that they will be able to prevent the facility from shuttering its doors.

“Our lawsuit doesn’t challenge the ability of the operator to close,” he said. “So eventually, at some point in the future, when there is an adequate plan in place, eventually that process will play out.”

Joyce Singer said she is not sure what to do if her mother is evicted. She hasn’t been able to find a good assisted living facility close to her home. She and her husband work long hours and Singer said it would be difficult to travel out to the nearest alternative.

“Probably, what we would try to do is see if we could get construction done to my apartment to put in a handicap bathroom,” she said. “I think that would not be great. First of all, we’re at work all the time and it would not be stimulating for her. She’d be a prisoner in our home.”