There’s a scene in the latest installment of the Hunger Games films in which Katniss Everdeen, the movie’s reluctant heroine, stands awkwardly stoic, decked out in custom-tailored armor, breastplate and all. “Everyone is either gonna want to kiss you, kill you or be you,” declares her escort Effie Trinket, primping her as if for prom.

A friend and I sat at a bar at the end of November discussing how amazing it would have been for a Katniss character to have starred in the action blockbusters of our early teens. I grew up playing princess. When I was about five, my dad used to blast Swan Lake on the speakers while I pranced around our living room, tiny arms flapping. I made him play both villain and prince. And as Tchaikovsky’s ballet neared the end, I’d run into my father’s arms, a wounded little bird, and with an Oscar-worthy sigh, I’d die.

Then came Indiana Jones. I was nearing 11 by the time I first watched the trilogy, and Indy had been around for almost two decades. Playacting changed: I no longer twirled but instead dodged giant rolling boulders and jumped over snake pits. I was captivated by Harrison Ford and everything he did. At times I wanted to kiss him, at others kill him, but mostly I wanted to be him. Not the actor but the hero. Had Katniss been around I surely would have played her in my make-believe adventures. 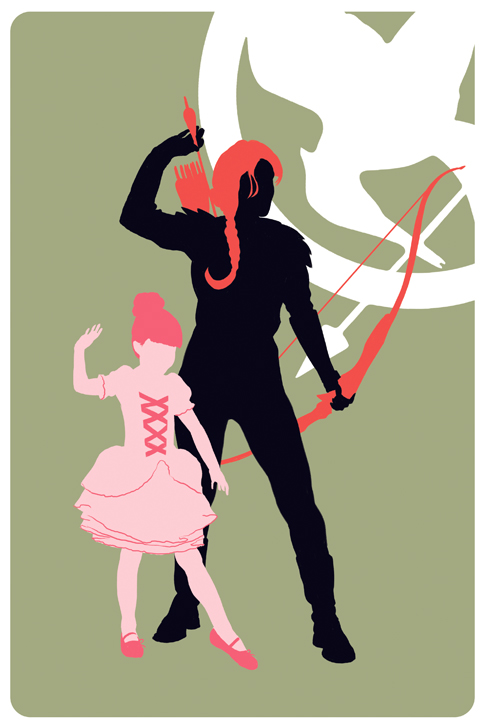 Alas, my heroine came 16 years too late. Jennifer Lawrence is now the only twenty-something allowed to unabashedly pretend she’s bow-and-arrow-wielding Katniss. And pretend well she does. Which is why the little girl in me, teeming with excitement as I watched her on screen, forgave the film its flaws: the Hollywood camp, the exhausting exposition, the young men.

Let’s talk about the young men, shall we? In the last movie, Catching Fire, the former tributes are forced back into the kill-or-be-killed Hunger Games by the leader of the Capitol, President Snow, played by a fittingly off-putting Donald Sutherland. The games are cut short by the rebel forces of District 13, long thought extinct, who take Katniss to make her the face of their revolution. Peeta Mellark, played by Josh Hutcherson, is left behind and taken by the Capitol, where he is tortured into becoming their propagandist. What is left is the shell of a young man who left me wondering whether it was the character or the actor who had given up.

Then there’s Gale Hawthorne, played by Liam Hemsworth. He’s good at doing an American accent and being handsome. Gale and Peeta are overshadowed by Katniss just as Hutcherson and Hemsworth are upstaged by Lawrence. Part of me was tickled by the sight of two strapping young men helplessly playing supporting roles to a female lead. (At last!) Part of me was bored.

They weren’t solely responsible for losing my attention. Much of the action of the first two films is replaced in the third with Katniss walking around looking conflicted, then sad, then empowered, then conflicted again. A lot. While Lawrence has the acting chops to make her inner struggle worth watching, the writing isn’t strong enough to make it quite worth staying awake for. Part of this is because there isn’t enough meat in the story to stretch what should have been a solid three-hour film into two shorter ones. But the four-part trilogy is profitable. And this is Hollywood, after all.

And, as proven by the late Philip Seymour Hoffman in the role of Plutarch Heavensbee, the public relations mastermind behind the revolution, Hollywood has its advantages. Delightfully understated, Hoffman delivers every line with ease. He is a welcome constant through the film’s ups and downs.

Panem is a dystopian society in which the population has given up freedom for the semblance of security and an ultra-rich minority rules over the starving masses with an iron fist. The most effective way to jolt the populace into action is through advertising, the agitprop of the day. “Propos,” as Heavensbee calls the commercials. “A little on the nose,” he says of one of them. “But, of course, so is war.”

The whole movie is a little on the nose. Which isn’t to take away from Suzanne Collins’ Hunger Games novels. Written for young adults, the series successfully tackles an array of topics, from class inequality to the commercialization of war. The latter is Mockingjay’s main focus. Heavensbee hires a film crew to follow Katniss as she tours the districts that have been ravaged by the Capitol. Played by Natalie Dormer, Cressida, the crew’s director, doesn’t miss a chance to milk despair. Like an experienced war photographer, she goes for the money shot, tact be damned. What results is a grimmer version of the Army Strong ad campaign.

Katniss grapples with being the poster girl for the rebellion. She cringes at the mendaciousness of it all, while we do the same at director Francis Lawrence’s lack of subtlety. In some ways, her character is bound to disappoint. Katniss’s tunnel-vision love for Peeta leads her to prioritize him over everyone else and the revolution itself, and she falls short of embodying a straight-up feminist or revolutionary heroine.

But while at times she’s frustratingly on the fence, and annoyingly obsessed with rescuing Peeta, it is her unwavering conviction to those she loves (and her badass archery skills) that make her a character worth rooting for. Even if she isn’t willing to kick ass and take names and take credit for every victory as we’ve been conditioned to believe action heroes should.

Katniss is earnest, never naïve. When the revolution’s leaders argue over the perils of recording the propos on the battlefield and the president of District 13, played by Julianne Moore (whose performance is as gray as her hair), warns Katniss that she could be killed, our heroine retorts: “Make sure you get it on camera.” Gotta love her.

Mockingjay, Part 1 left me longing for more. Which was, I suppose, its purpose and its flaw. But I expect many a young girl (and boy) to grow up playing Katniss. And the movie theaters are sure to be packed with expectant audiences ready for battle this time next year.