Go to a protest in New York City these days and you’re likely to see people holding hand-mounted 11” x 17” placards whose slogans appear in uniformly-sized white letters on a pitch black background.

The placards express a multiplicity of messages — “Unarmed Civilian,” “The Whole Damn System Is Guilty As Hell,” “Stop Killing Our Friends,” to name a few — which manage to distill the varying sentiments of the protest moment with a sparse, zen-like clarity that invites further reflection.

“The messages get into people's hearts and minds,” says Laurie Arbeiter, a founder of We Will Not Be Silent, an artist/activist collective that supplies the protest placards.

Arbeiter, 56, grew up learning about the Holocaust from her working-class Greek Jewish family in Queens, where the imperative of speaking out against racism and oppression was impressed upon her from an early age. Coming out as a lesbian would later deepen her sense of the danger posed by intolerance. An artist by training, she put down her paintbrush in 2004 to fully dedicate herself to anti-war activism and opposing the Bush administration’s abuse of civil liberties under the guise of the War on Terror. 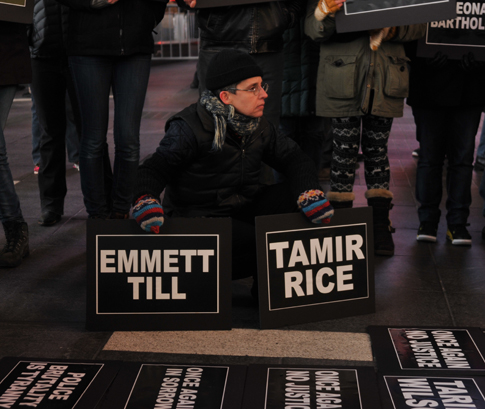 Arbeiter was a part of a collective of artists and activists from The Critical Voice and Artists Against the War who decided to use the white on black color combination because it stands out and can be seen even at a distance. Their first T-shirt read "We Will Not Be Silent" in English and Arabic. The words were taken from the White Rose, a Nazi-era resistance group inside Germany. The T-shirt went viral after a news story broke that authorities at JFK Airport barred an Iraqi-born resident of the United States from boarding a plane while wearing the shirt.

“Wearing a message on your body is a powerful way of expressing yourself,” Arbeiter says.

Arbeiter and her collaborator Sarah Wellington have since moved more than 70,000 prints of the “We Will Not Be Silent” T-shirt. They now offer shirts with about 50 different slogans to choose from while also continuing to churn out their distinctive signs for people to pick up and use at protests.

The most popular shirt of late has been “Unarmed Civilian.” Arbeiter and Wellington crowdfunded money to print more than 700 “Unarmed Civilian” T-shirts, which they shared with the residents of Ferguson, Missouri, during a visit this fall. They also produced hundreds of signs that were widely seen in press reports from the protests in Ferguson that followed a grand jury decision not to indict police officer Darren Wilson. 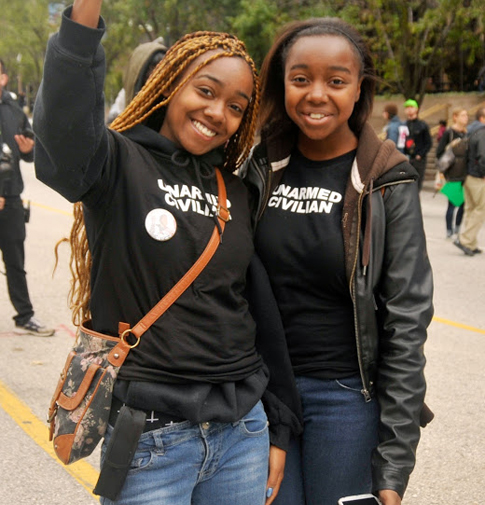 "Take the Chains Off: The Movement Continues"
By Nicholas Powers
"Learning from the Past, Building for the Future"
By Matthew Birkhold