Bread and Puppet Theater was founded by Director Peter Schumann in 1963, amidst the downtown counterculture of New York’s Lower East Side, and spent its first decade performing in anti-Vietnam War demonstrations. As its name suggests, the company’s signature style of political pageantry uses large-scale papier-mâché puppets and includes an offering of bread to the audience.  This month, the company, now based in Glover, VT, makes its annual return to its ancestral home with a three-week run of Captain Boycott at the Theater for the New City. (The company is concurrently presenting The Nothing Is Not Ready Circus.)

The first moments of Captain Boycott are the most stirring. Cardboard bodies hang from the ceiling while a cast member uses a single clip light to cast shadows that seem to sway in the wind like lynched bodies in a tree. Moments later, the cardboard bodies are released and brought to life by a cast of puppeteers. But the life they live is a hard one; the bodies fall to the earth and writhe, fighting one another to reach the top of the heap. A disfigured cloth puppet is rolled onto the stage in a wheelbarrow and unceremoniously dumped onto the pile of bodies. 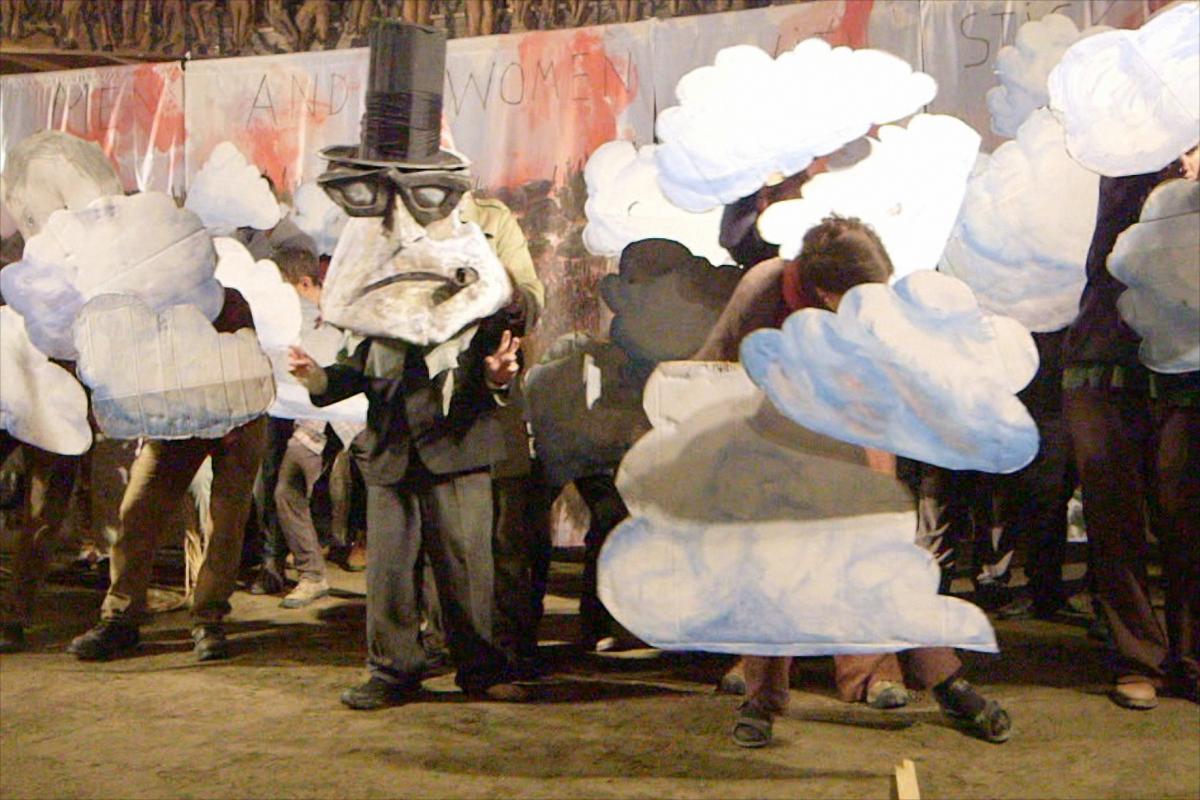 These images highlighted the incongruity of watching political art that encourages taking action in the streets. It was uncomfortable to witness the creation of these disturbing and impactful images with the knowledge that protests responding to structural racism and the pattern of disregard for black lives were taking place outside the theater walls. (Two separate grand juries decided to not indict the police officers who killed Michael Brown and Eric Garner, both unarmed black men, in the days before Captain Boycott opened at Theater for the New City.)  The opening of this production shows either an ability to intuit the themes and struggles of the moment or an ability to adapt and revise in light of recent events. Either way, this degree of relevance should be expected of Bread and Puppet, a company dedicated to protest. But the immediate effect of evoking current events made the later, more abstract elements of the production less satisfying. If now is an important time for action, then how much time should we devote to related issues and ideas that, while certainly present, do not feel equally urgent?

The production that follows the opening segment is divided into three parts united by themes of cyclical oppression and injustices committed in the name of progress. Part one, “A Thing Done in A Seeing Place,” uses Sophocles’ Antigone as a lens through which to view the relationship between citizens, police, and the State. Part two, “The Horizontalists,” is a chuckle-inducing lecture on the tensions between the Horizontalists, those who prefer to stay in bed, and the Verticalists, those who prefer an upright routine of overwork. Part three, "Captain Boycott," is an embellished historical reenactment of the late-19th Century conflict between a wealthy Irish landlord and his tenants that gave birth to the term "boycott."

Schumann uses simple and affordable materials to create moments of theater-magic. Images are Bread and Puppet's primary means of communication, but the production is sprinkled with the occasional witticism and insightful battle cry. The production is not a cohesive developing argument, but the audience leaves with a grab-bag of memorable impressions. Though Bread and Puppet's didactic presentational style can cause some moments to feel like a litany of recycled ideas, this is partly a result of the limitations of viewing the work in a traditional theater space.

As street theater, it is better suited for a public arena where it can serve as a demonstration against the actions and systems it protests. Bread and Puppet is not interested in engaging its audience in an intellectual analysis of a particular political stance. The company prefers to proclaim – not explain – and wastes no time getting to the point.

Bread and Puppet Theater is performing Captain Boycott through December 21 at Theater for the New City, 155 First Avenue, at 10th Street, East Village; (212) 254-1109. Discounted tickets can be purchased at theaterforthenewcity.net with the code BPTNC2014.