When the biodiesel fuel truck parks in front of the 12-story, 120,000-square-foot office building on West 20th Street, it draws attention from superintendents in the surrounding buildings.

“People from other buildings, when they see the truck outside, they say: ‘Hey, is it true? Does it smell like McDonald’s when your boiler kicks up?’” said Mitch Lappin, the building’s manager.

For a little more than a year, the building has been heated with pure biodiesel, a clean-burning, non-hazardous, organic fuel that can be made from plant-based products such as soy, corn, canola and even recycled cooking oil, an abundant resource in New York City. Lappin began exploring biodiesel as an alternative to conventional heating oil after the Natural Resources Defense Council, which is headquartered in the upper floors of the building, asked the property’s management company to make the switch.

Lappin said that he was initially skeptical of biodiesel. But after cleaning out the fuel tank and making a few adjustments to the air and fuel intake, the biodiesel performed better than he expected and, it turns out, did not smell like french fries. In fact, he said there’s no odor at all.

“According to one of my combustion guys who tested the boiler’s efficiency, he said: What you’re pushing now as far as efficiency of that boiler, which was, so to speak, born in 1979, it’s fantastic. I don’t see those numbers anywhere,” said Lappin.

Hundreds of property owners and building managers are scrambling to find a clean-burning fuel in order to meet a July 1 deadline, when the city will ban the use of the high-polluting heating oil known as No. 6. There are still 963 buildings using the fuel, according to a spokesperson for the city’s Office of Management and Budget. The second-dirtiest heating oil, No. 4, won’t be banned until 2030, but the city is eager to see property owners switch to cleaner alternatives such as low-sulfur heating oil No. 2, biodiesel or natural gas.

The city issued its heating oil mandates in 2011 as part of an effort to combat air pollution. The mandate applied to almost 10,000 buildings still burning No. 4 and 6, which contributed more to air pollution than all the city’s car and truck traffic.

The Bloomberg administration promoted natural gas as the cleanest alternative and the city provided financial incentives in the form of grants and low-interest loans to buildings that converted to natural gas. Con Edison is investing $100 million to expand and upgrade New York City’s natural gas infrastructure to meet the demand.

Increasing New York’s consumption of natural gas angered anti-fracking activists. The process of extracting natural gas, called fracking, involves injecting a toxic cocktail of chemicals into the ground to release the gas. The chemicals involved can leak into the surrounding rock and poison fresh water supplies. And although natural gas burns cleaner than petroleum-based oil, Cornell University researchers discovered that methane released during the extraction and transport of natural gas contributes more to global warming than coal.

However, Donohue and other environmental activists were initially wary about promoting biodiesel as an alternative to natural gas. Demand for biofuels has been linked to habitat destruction and rising food prices. Meanwhile, most of the crops used to make biodiesel are grown by the world’s agribusiness giants, which use genetically modified (GMO) crops to maximize output. 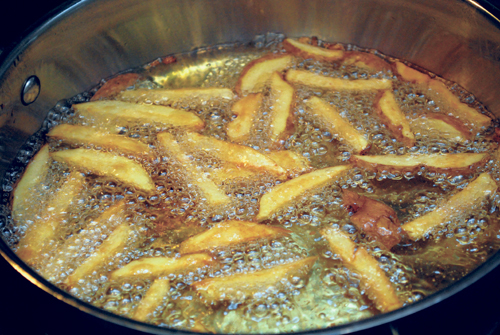 But when it comes to finding an alternative to heavy heating oils like No. 6 and No. 4, Donohue said that biodiesel was the best option, especially because researchers in the United States and Europe are developing ways to produce biofuel from plants like grass and algae, which do not need to be cultivated on land that’s suitable for growing food.

“We always have to be vigilant,” said Donohue. “But given that you don’t have many choices in New York City because the building stock is older and the law is already in effect, if you were to wait until biodiesel is perfected, all of the buildings will have converted to gas by then.”

Dehran Duckworth, sales manager for Tri-State Biodiesel, which provides pure biodiesel to Lappin and more than a thousand other customers in New York City, said that it’s almost impossible to avoid using GMO products to make biodiesel because big food producers like Archer Daniels Midland and the Louis Dreyfus Group have taken over the farms that produce America’s energy crops.

However, Tri-State, which is based in the South Bronx, uses an innovative approach to making biofuel. A quarter of the biodiesel sold by Tri-State comes from recycled cooking oil, which the company collects from New York restaurants. The rest generally comes from soybeans that can be used for food while the oil from the legume, which used to be considered a waste product, is made into biofuel.

Tri-State is in the process of expanding its production plant in Bridgeport, Conn., in order to produce more than 1 million gallons of biodiesel a month — more than enough to supply all 10,000 buildings that were burning No. 6 and No. 4, said Duckworth.

Another benefit of biodiesel is that, because it’s so similar to conventional heating oil, the cost changing fuels is very low. Lappin said that he looked into switching over to natural gas but was deterred by the cost.

“For the [chimney] alone, which has to be lined with steel, I was quoted a price in the high 90s,” he said. “And then the burner has to be replaced or rewired. And that was maybe a few hundred thousand on that. And then the fact that Con-Ed has to come in and do their part to upgrade the gas feed.”

Environmental activists and community organizers have grown alarmed that property owners are using expensive natural gas conversions to drive up rents for rent-regulated tenants in the form of major capital improvements (MCIs). Under New York State law, when landlords make improvements to rent-regulated buildings, they can apply for an MCI to raise rents on tenants based on the cost of installation. For owners who already factor the cost of heat into the rent, they benefit from the low price of natural gas while transferring the expensive installation cost to their tenants.

Despite the skewed incentives created by rent laws, Duckworth sees the city as a place where biodiesel can flourish.

“New York City presents a unique opportunity to heat buildings on 100 percent biodiesel due to the fact that the lion’s share of buildings in the city have basement tanks with a heated environment where they can store the fuel,” he said.

If a fuel tank is not sheltered from the cold, the biodiesel will congeal and the heating system will fail. Residents of a co-op in the East Village went without heat or hot water for almost a week during a cold snap in October because their fuel tank is located in an unheated ground-level room with a ventilation window that brings in cold air from outside.

“In going green, we thought we’d be helping the planet. [Biodiesel] seemed like a good alternative,” said co-op treasurer Robert Sutherland-Cohen. “We did encounter problems, which we did not realize would crop up in the winter.”

To keep the fuel flowing in winter, Tri-State supplied the building with a mixture that was 20 percent biodiesel and 80 percent No. 2 heating oil.

“By doing the mixture of biodiesel and No. 2 in the winter and then going back to more biodiesel when the weather warms, it balances out to about 50/50. So we’re doing about 50 percent of our part for the planet,” said Sutherland-Cohen.

In fact, anyone whose building heats with conventional oil is making a contribution to reduce fossil fuel consumption. A 2012 mandate by the city required all heating oil to contain at least 2 percent biodiesel. The city also provides tax credits for property owners who use a blend of 20 percent biodiesel or more.

City Councilmember Donovan Richards (D-Far Rockaway), a vocal opponent of fracking and head of the council’s Environmental Protection Committee, told The Indypendent via email that the city should be doing more to lower its use of fossil fuels.

“While greener technology is an admirable goal, any fossil fuel usage cannot be celebrated as ‘green’ without acknowledging that we must move completely away from non-renewable sources of energy,” he said. “While we have made important strides in banning fracking within the state, our activity may be subsidizing it elsewhere in the country to the detriment of us all.”