Growth of Real Hourly Compensation for Production/Nonsupervisory Workers and Productivity, 1948–2011 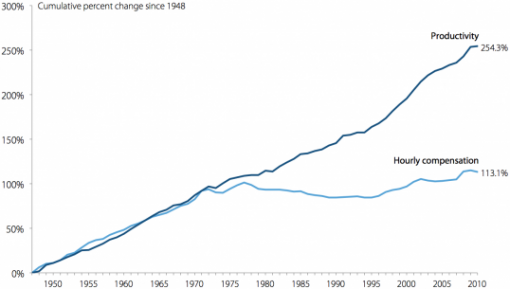 Is America in the throes of a class war?

Look at the chart and decide for yourself. It’s all there in black and white, and you don’t need to be an economist to figure it out.

But, please, take some time to study the chart, because there’s more here than meets the eye. This isn’t just about productivity and compensation. It’s a history lesson too. It pinpoints the precise moment in time when the country lost its way and began its agonizing descent into Police State USA. That’s what it really means.

It all began in the 1970s, that’s when everything started going down the plughole. Once wages detached from productivity, the rich progressively got richer. They used their wealth to reduce taxes on capital, role back critical regulations, break up the unions, install their own lapdog politicians, push through trade agreements that pitted US workers against low-paid labor in the developing world, and induce their shady Central Bank buddies to keep interest rates locked below the rate of inflation so they could cream hefty profits off gigantic asset bubbles. Now, 40 years later, they own the whole f*cking shooting match, lock, stock and barrel. And it’s all because management decided to take the lion’s share of productivity gains which threw the whole system off-kilter undermining the basic pillars of democratic government. Here’s how FDR summed it up:

“The first truth is that the liberty of a democracy is not safe if the people tolerate the growth of private power to a point where it becomes stronger than their democratic state itself. That, in its essence, is Fascism—ownership of Government by an individual, by a group, or by any other controlling private power.” (Franklin D. Roosevelt: “Message to Congress on Curbing Monopolies.,” April 29, 1938. Online by Gerhard Peters and John T. Woolley, The American Presidency Project.

Are we there yet?

Pretty close, I’d say. The only way to preserve democracy is by keeping one hand firmly clasped around the windpipe of every rich bastard in the country. If you can’t keep your tycoons in check, you’d might as well throw in the towel and accept a life of indentured servitude now, because that’s where you’re headed anyway. Here’s a short rundown of the changes that took place in the ’70s by economist Lawrence Mishel:

“Productivity in the economy grew by 80.4 percent between 1973 and 2011 but the growth of real hourly compensation of the median worker grew by far less, just 10.7 percent…. The pattern was very different from 1948 to 1973, when the hourly compensation of a typical worker grew in tandem with productivity. Reestablishing the link between productivity and pay of the typical worker is an essential component of any effort to provide shared prosperity and, in fact, may be necessary for obtaining robust growth without relying on asset bubbles and increased household debt.

It is hard to see how reestablishing a link between productivity and pay can occur without restoring decent and improved labor standards, restoring the minimum wage to a level corresponding to half the average wage (as it was in the late 1960s), and making real the ability of workers to obtain and practice collective bargaining.” (The wedges between productivity and median compensation growth, Lawrence Mishel, EPI)

When was the last time you heard Obama talk about “improving labor standards” or “collective bargaining”?

Don’t make me laugh. It’s not even on his radar. Did you know that inequality has actually gotten worse under Obama? Much worse.

It’s true. He might proclaim his determination to “tax millionaires” in one of his blustery orations, but it’s all just rhetorical fakery. The fact is, the 1 percenters have done better under Obama than they did under Bush. Check this out from Naked Capitalism: 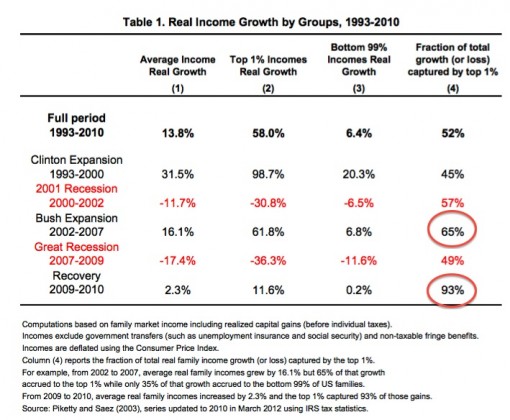 93 cents of every buck has gone to the 1 percenters under Obama. And you wonder why Wall Street loves this guy? It’s because he’s bent over backwards to make them richer, that’s why. Just look: 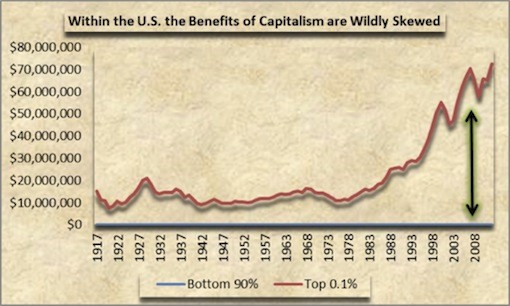 The rich are making money hand over fist, and it’s all due to President Twoface and his dodgy friends at the Federal Reserve. Of course, Obama would like everyone to think that he’s really rooting for the little guy, doing his best to boost wages, create more jobs and raise living standards for ordinary working people.

“The combined trends of increased inequality and decreasing mobility pose a fundamental threat to the American Dream, our way of life, and what we stand for around the globe. And it is not simply a moral claim that I’m making here. There are practical consequences to rising inequality and reduced mobility.”

Got that? Obama is all about closing the gap between the rich and the poor. Just don’t look at his record or you might notice a slight discrepancy between what he says and what he does.

The fact is, stocks have surged under Obama as have corporate profits which “have doubled since he took office in 2009″. At the same time, he’s overseen the slowest recovery in the postwar era, stood idle while middle class incomes were shaved by nearly $5,000 annually, and refused to intervene when over 700,000 public sector jobs were slashed in the early days of his administration. And we won’t even mention the health care debacle, the endless spying, the perennial warmongering, targeted assassinations or Gitmo.

But as bad as Obama may be, the problem didn’t start with him. It goes back decades as the first chart indicates. The steady erosion of workers bargaining power, changes in the tax code favoring capital, anti-worker trade agreements, deregulation, loosey-goosy monetary policy and, of course, the “biggie”, financialization, have all contributed to the evisceration of the middle class which now appears to be hanging by a thread. Check out this clip from authors John Bellamy Foster and Fred Magdoff who researched the roots of financialization and wrote about it in an article in The Monthly Review titled “Financial Implosion and Stagnation”:

“It was the reality of economic stagnation beginning in the 1970s, as heterodox economists Riccardo Bellofiore and Joseph Halevi have recently emphasized, that led to the emergence of “the new financialized capitalist regime,” a kind of “paradoxical financial Keynesianism” whereby demand in the economy was stimulated primarily “thanks to asset-bubbles.” Moreover, it was the leading role of the United States in generating such bubbles—despite (and also because of) the weakening of capital accumulation proper—together with the dollar’s reserve currency status, that made U.S. monopoly-finance capital the “catalyst of world effective demand,” beginning in the 1980s. But such a financialized growth pattern was unable to produce rapid economic advance for any length of time, and was unsustainable, leading to bigger bubbles that periodically burst, bringing stagnation more and more to the surface.

A key element in explaining this whole dynamic is to be found in the falling ratio of wages and salaries as a percentage of national income in the United States. Stagnation in the 1970s led capital to launch an accelerated class war against workers to raise profits by pushing labor costs down. The result was decades of increasing inequality.” (Financial Implosion and Stagnation, John Bellamy Foster and Fred Magdoff, Monthly Review)

Let me get this straight: Persistent stagnation paved the way for financial engineering and asset bubbles where investors could make beaucoup dough regardless of the (abysmal) condition of the underlying economy? Is that it?

Sounds a lot like today, doesn’t it; where corporations are minimizing their capital expenditures, laying off workers, and reducing revenues, but still making record profits by goosing stock prices with buybacks which add absolutely nothing to productivity. But, then again, why expand your business if you can make piles of moolah by just loading up on your own shares?

It’s madness, and it’s all the result of 6 years of zero rates and QE which has lured investors further and further out on the risk curve. The system is so deluged with liquidity that people are taking chances they never would have otherwise.

But where do we see “the falling ratio of wages and salaries as a percentage of national income in the United States” that the authors mention in their article? Is there any real proof of a class war or is it just more leftist folderol? 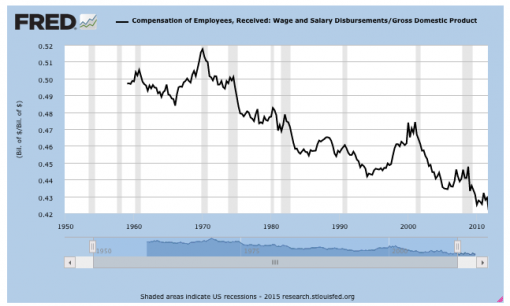 Foster and Magdoff make a pretty convincing case that the system has been rejiggered to overcome stagnation. Financial assets provide a place where the big wigs can grow their money during the periods when the economy is flatlining due to crappy wages, weak demand and slow growth. And that’s the name of the game, isn’t it; creating outlets for profitable investment even in the down-times?

You bet it is. That’s what QE is really all about, Bernanke even admitted as much in an op-ed in the Washington Post in 2010. He said:

“…higher stock prices will boost consumer wealth and help increase confidence, which can also spur spending. Increased spending will lead to higher incomes and profits that, in a virtuous circle, will further support economic expansion.”

There it is from the horse’s mouth. Bernanke wanted higher stock prices, and that’s what he got. But when does all that wealth start trickling down to the worker-bees like he promised? (At present, the economy is still growing just a touch above 2 percent, not at all what one would expect after $4 trillion in asset purchases.)

More important, who are the lucky ducks who own all those stocks and bonds that the Fed just inflated with 3 rounds of QE? It certainly isn’t Joe Sixpack who can barley scrape up enough dough to make the monthly payment on his ’99 Chevy Caprice.

Of course not. The only people who own stocks are the rich and the very, very rich Take a look: 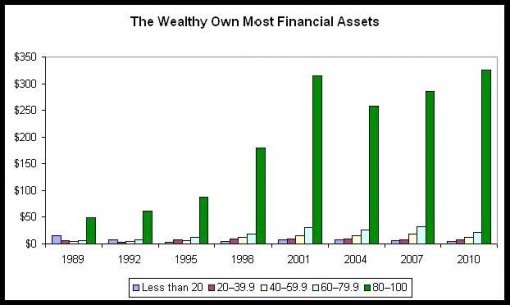 Just think about that for a minute: Bernanke admits that the purpose of QE is to inflate asset prices but, on closer examination, we see that those very assets are owned almost exclusively by a small group of very rich investors. Does that seem like an evenhanded policy to you, dear reader, or does it seem like the former Fed chair simply used QE to transfer trillions of dollars to his shifty constituents?

QE was never intended to boost inflation, (it doesn’t), spur more lending (it hasn’t) or lower long-term rates. (Long-term rates dropped after all 3 rounds of QE, and are currently lower than during the Great Depression!) The program’s real objective which was to funnel more money to Bernanke’s moocher friends via asset inflation. In that regard, it has succeeded beyond anyone’s wildest imagination. Just look:

Average income growth in US recoveries: top 10% versus the bottom 90%. (Graph: Pavlina Tcherneva) 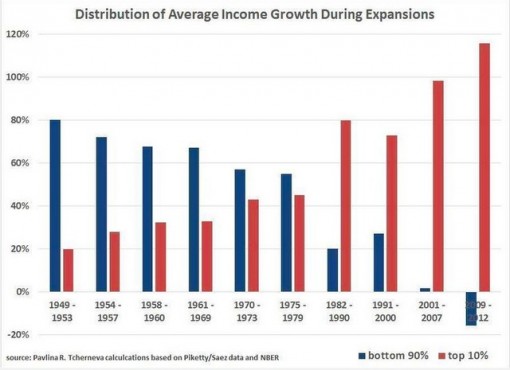 (Smart Charts: An Economic Recovery for the 1%, Bill Moyers)

You can see from the chart above that the bottom 90 percent have gone from treading water to sinking like a stone. And, as we all know, a growing number of these same people are rapidly slipping through the cracks, loosing their spot in the middle class, and entering a terrifying new world of economic hardship and uncertainly.

This is no accident nor is it the result of free market operations that unavoidably create winners and losers. The upward distribution of wealth is the natural corollary of decades of aggressive lobbying, government infiltration, and political arm-twisting. Ruling elites are a like-minded bunch who know what they want and will stop nothing until they get it. The system has been effectively restructured to serve their needs and those of their constituents. They alone control the levers of state power as well as the marionette politicians who do their bidding.

So, is America in the throes of a class war or not?

Indeed, it is. But only one side is fighting.

This article originally appeared at CounterPunch.