A Brooklyn real estate firm called the police on its own tenants after they gathered outside the company’s offices in Flatbush on Monday morning and demanded a meeting with management to discuss deteriorating building conditions and illegal rent overcharges.

More than a dozen residents from four buildings in Crown Heights demonstrated outside the office of their landlord, Burke Leighton Asset Management. They wanted the company to sign a contract with the tenants that would promise timely repairs, protect longtime tenants who pay below-market rents and guarantee a five-year rent freeze.

Instead, the company locked its office doors and peered at their tenants through the windows. Two police officers later arrived in a patrol car and said they were responding to a call about a disorderly group. The officers left after briefly speaking with some of the demonstrators and a representative from the office of State Assemblyman Walter Mosley, who represents the area where the tenants live. 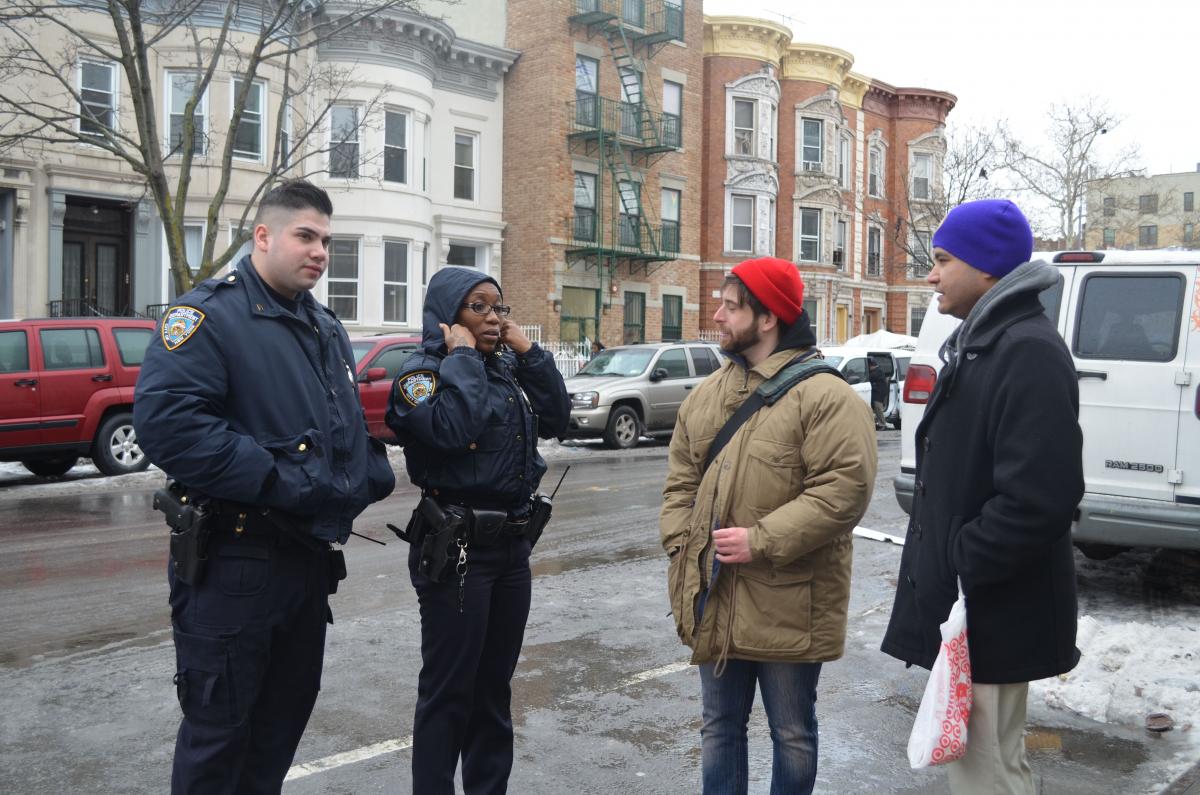 NYPD officers speaking with one of the tenants and representative from State Assemblyman Walter Mosley's office. Photo: Alex EllefsonStaff at Burke Leighton’s office declined a request for comment about the demonstration.

Robert Williams, a Burke Leighton tenant who lives at 990 President Street, said he was outraged that his landlord would rather call the police than meet with the tenants.

“It’s a disgrace,” he said. “They don’t do repairs properly. Anything you complain about, whether it’s heat or hot water, it’s always a problem. But if you’re late a week or two weeks with your rent, next thing you know, you’re getting a letter from the court saying that they’re trying to evict you.”

The demonstrators all had similar complaints: tales of cracked windows, busted elevators and days without heat or hot water.

Jeanel Moril, who lives at another Burke Leighton property, said the company had failed to fix a leaking radiator in the upstairs apartment, causing water to spill “like rain” into her home.

Moril and others at the demonstration said that the lack of repairs were part of a larger pattern of harassment meant to drive out the rent-regulated tenants paying below market rates. Most of the demonstrators were also members of the Crown Heights Tenant Union, a neighborhood group formed a little more than a year ago in response to predatory behavior by real estate and banking interests that is displacing the community’s longtime residents.

“They want our apartment because the new tenants that would move in, they’d charge them more,” she said.

Under New York state law, a property owner can raise the rent of a regulated apartment by 20 percent after a tenant moves out. The owner can justify further rent increases by making renovations to the apartment after it has been vacated.

However, some of the tenants alleged that Burke Leighton’s executive, Freddy Sayegh, who owns retailer Big Daddy Appliance, was inflating the cost of renovations by writing receipts for new appliances from his own store.

In January, Crown Heights tenant Esteban Girón said he won a settlement with Burke Leighton, in which the company agreed to forgive almost $7,000 in unpaid rent and permanently reduced the monthly rent by more than $300. Girón began withholding his rent in March after he noticed that the renovations to his apartment didn’t seem to merit the 80 percent rent increase that occurred after the previous tenant moved out. He said Burke Leighton’s lawyer had produced receipts from Big Daddy Appliance in order to justify the $25,000 in renovations the company claimed to have made.

“It’s amazing that he’s been able to get away with this but it’s a really good indicator of how routine this has become for him,” he said.

Girón has been asking other new tenants in his building to review their rent history and find out if they are being overcharged.

“There’s only so long that [Sayegh] can avoid us,” said Girón. “Eventually, he’s going to have to be willing to meet with us.”

New York's Tenant Laws Are In Peril
By Steven Wishnia