“Vision Quest”
Museum of Contemporary African Diasporan Arts
Through May 31

Amaryllis DeJesus Moleski’s women are on a journey. They ride sinewy steeds and clothe themselves in the hides of magical beasts. They wield glowing scepters and fight hordes of monsters. Also, they wear bright pink nail polish, diamond earrings and basketball jerseys.

Sheena Rose’s work, meanwhile, takes a less fantastical approach to the idea of the journey. Her art has the amenable feel of a travel sketchbook, but with busy, overlapping lines suggesting some sort of algorithmic undercurrent — hand-drawn memories in the digital age. Her particular aesthetic is well utilized in humble animated videos, where she depicts herself doing everyday activities like waiting for the bus or sleeping. In perhaps her strongest piece here — a small drawing — Rose shows a small figure (maybe herself) trepidatiously setting out into a convoluted streetscape of wires and noise. 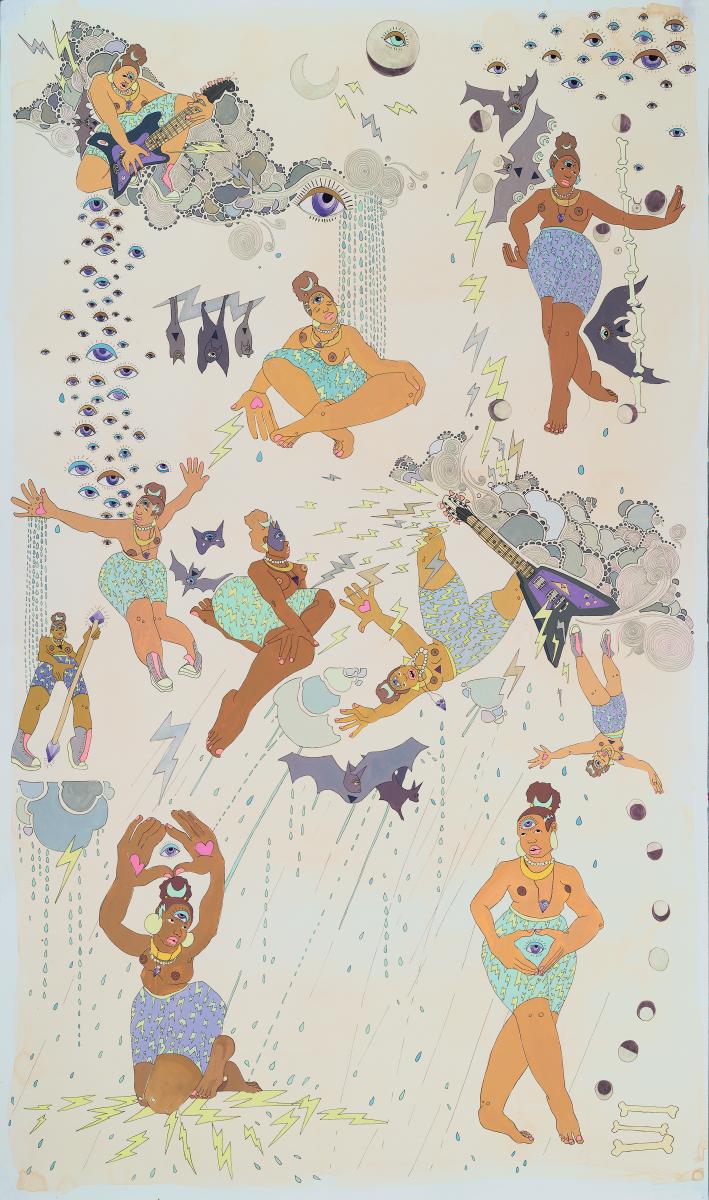 Race isn’t the only thing going on in Rose’s artwork — far from it — but in the context of an Afrocentric exhibition space, the work is necessarily cast through an African historical lens. Moleski and Rose’s works are currently on view in “Vision Quest,” a two-person exhibition at the Museum of Contemporary African Diasporan Arts. With that in mind, even the most humdrum of Rose’s actions emerge out of a troubled history, recalling the oppressive restrictions that have been placed on those of African descent. There was a time when it would’ve been unthinkable for a young African woman to be out traveling on her own.

Similarly, in the context of African tradition and lineage, Moleski’s paintings highlight some shared qualities of age-old African and European quest narratives. Her work, though, speaks more to the present than the past. Her characters are on an adventure, and not just into the heart of some imagined storybook hero’s journey, but into the untamed wilds of blog rants and image memes. The creatures inhabiting these paintings — like three-headed monster cats and rainbow-pooping ponies — come from Moleski’s dream world, and also from the Internet.

The idea of fantasy — as a tried-and-true literary genre and as a guiding cultural force — has undergone some wild mutations thanks to digital culture. And yet, even now, the worlds of fantasy and science fiction remain dispiritingly white, with depictions of women hewing close to long-established norms of thin-and-paleness (consider the racial makeup of recent motion picture epics like Game of Thrones or The Hobbit). A 2014 study by Lee & Low Books found that of the top 100 highest-grossing sci-fi and fantasy films, only eight had protagonists of color (six of them portrayed by Will Smith). As science fiction writer Steven Barnes has said, most sci-fi is “white people and their imaginary friends.”

Here in the present, the thought of fantasy heroes as female, dark-skinned and full-figured — like Moleski’s Day-Glo, three-eyed warriors — shouldn’t be all that strange. And yet, these kinds of characters carry with them a pleasant shock of newness: they’re familiar but with qualities that remain distinctly underrepresented in the genre. Perhaps, as far as heterogeneous, Internet-era fantasy stories go, the journey is really just beginning.

The Red Decade: Art with a Gritty Heart
By Gerald Meyer