Now suddenly Gentile is invoking and laying claim to the spirit and the tragedy of Eric Garner in his attempt to win an open U.S. House seat  he is vying for with Daniel Donovan, the Staten Island district attorney who oversaw the grand jury that let Garner's killers walk.

Donovan is the Republican nominee in the May 5 special election to fill the  House seat in New York’s 11th congressional district that has been empty since former congressman Michael Grimm pled guilty to tax evasion in December and resigned. The conservative-leaning district covers all of Staten Island as well as the South Brooklyn neighborhoods of Bay Ridge, Dyker Heights, Bensonhurst and Gravesend. 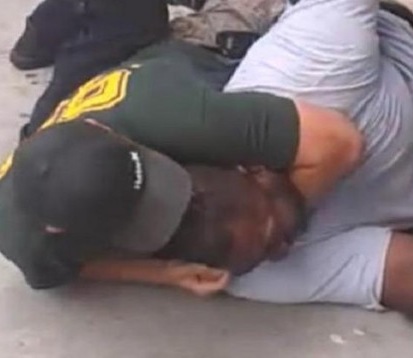 The outright hypocrisy and shamelessness of Vinnie Gentile using Eric Garner to appear to make Gentile himself seem "progressive" is symbolic of the new normal of a number of abusively misleading Democratic Party politicians, particularly in this case. Gentile has said nothing in the least bit supportive about Garner and the ensuing protests last year, when it mattered most, nor did any of the organizations that work on and back his campaigns, including the Bay Ridge Democrats and the Stars and Stripes Democratic Club in Bensonhurst, two Democratic groups who ran Dominic Recchia's failed congressional campaign last fall while Grimm was facing trial on 20-count indictment.

Much like Gentile's good friend, the former Brooklyn District Attorney and now disgraced (and facing charges) Charles “Joe” Hynes, who lost his 2013 race to Kenneth Thompson, Gentile is doing whatever he can to remain in public office.

Gentile, 56, was first elected to the State Senate in 1996. After losing that seat in 2002, he managed to narrowly win a five-way special election to fill the empty City Council seat vacated by the opponent who had defeated him for his seat in the State Senate the previous fall.  Since then, he has squandered much of his 12 years on the Council doing insincere things that don't matter. In a 2013 election stunt, he and Hynes shut down massage parlors, as if anyone cared about such a frivolous thing in a time when other issues, like massive drug abuse, lack of jobs, and local pedestrian deaths were far more pressing. And there are Gentile's other absurd notions of his own heroism, such as failing to maintain B37 bus service and then trying to take credit for getting it back when he shouldn't have let it be taken away in the first place. Like most of the New York City Council, he continually creates unnecessary issues and crises and turns them into spin.

The Bay Ridge Democrats, the Stars & Stripes Democratic Club, various local Democratic Party operatives like Justin Brannan, Jamie Kemmerer and Chris McCreight continue to go to bat for Gentile in his campaigns. They hope to use Gentile’s rather modest power and influence to try and ride him into their own careers in politics and domination of community affairs. They too have ignored the Eric Garner case and other serious concerns, choosing instead to engage in Democrat vs. Republican squabbling

There is no real substance to the local Democrats here in Bay Ridge. As with most of the rest of New York City, local politics is increasingly dominated by centrist liars and oafs who attempt to pose as Liz Warren-style new progressives. They are all careerists and will wind up doing what Vinnie Gentile and almost every other current and former councilmember, including Mayor de Blasio, has done – merely serve real estate, corporate, and Wall Street interests, because they haven't made the effort to figure out how to free local politics from monied interests that are the primary source of funding for their political campaigns.

This type of disingenuous two-faced politics is sociopathic. And, the blatantly insincere use of a tragedy like the death of Eric Garner in order to try and win an election should not be overlooked just because many progressives believe that voting for a Democrat is always better than voting for a Republican. This leads to a loss of any kind of voice for New York’s disempowered majority, and breeds the conditions for more corrupt behavior.

New York City Democrats attempt to portray themselves as friends of the middle class, while the entire time opening the doors to dishonest and predatory business interests that are actively dismantling the middle class and the lower income residents – all for the sake of hidden kickbacks and long careers in politics.  The perfect example of this is Shelly Silver's demise and the blatant and flippant corruption of Andrew Cuomo. And they continue to justify the corruption by saying that it is just how "the game is played" or that we, as voters, don't understand "how hard it is."

Electing Democrats just because they have conveniently labeled themselves "Democrat" is as foolish as voting Republican.  Way too many of these creepy centrist Democrats use only rhetoric as proof of some progressive substance, but the most significant actions these politicians take is to continue to sell all of us out, at almost every juncture and in a comprehensive way, that makes it immensely difficult to make up lost ground, politically and economically. We fall for the fear of "vote for us or you get them".  And we really don't need to do this any longer.  This seems to be forgotten in every election cycle.

Michael Reiss is a Bay Ridge resident and community activist.