For the last 10 years, the West Bank village of Bil’in has been the site of weekly protests against Israeli occupation. Home to some 1,900 Palestinians and, in recent years, a rotating cadre of international activists and visitors, the village has become known around the world for its nonviolent tactics and its persistence against the Israeli Defense Forces.

Palestinian activist Iyad Burnat, the coordinator of the Popular Committee of Bil’in, has been a leader of this resistance through the construction of the Israeli West Bank apartheid wall, three Gaza wars, changes in leadership on all sides, a faltering, if not altogether stagnant, peace process and, in March, the 2015 Israeli elections. These last saw Israelis reelect Prime Minister Benjamin Netanyahu, but not before he made an explosive retraction of his support for a two-state solution to the Israeli-Palestinian conflict.

For some in the political establishment and the American Jewish community, Netanyahu’s political maneuvering removed the last fig leaf from the moribund idea of a two-state solution, prompting major debate about the legitimacy of U.S. support for Israel. For Burnat, the possibility of a two-state solution died a long time ago. The Indypendent spoke with him in New York City just before he kicked off a month-long U.S. speaking tour.

Alina Mogilyanskaya: In the 10 years of these demonstrations, what are the biggest successes and losses you’ve experienced in Bil’in?

Iyad Burnat: The biggest success is that we got the Israelis to demolish a part of their wall and move it back 500 meters. They gave back the land to the farmers. In general, in Palestine, it’s a small success. But in a small village like Bil’in, it’s a big victory. It’s the first time that’s happened in Palestine.

The biggest loss is that we lost our friend Bassem Abu Rahmeh and his sister. Bassem didn’t have a gun. He never threw a stone. It was the 17th of April, 2009, and we were having a demonstration for Palestinian Prisoners’ Day. One of the Israeli soldiers shot him in the chest with a tear gas canister. These canisters are very heavy, very black, very fast. You are supposed to shoot them 500 meters in the sky, but they shot directly at Bassem from a distance of 20 meters. So it made a big hole when it touched him and he died right there in that spot.

What are your thoughts about the recent Israeli elections? Here in the United States, Netanyahu’s campaign statements that there won’t be a Palestinian state under his watch have set off an unprecedented debate.

For us, maybe Netanyahu is better than the others. Because people outside can see more clearly what’s going on. When Netanyahu said there wouldn’t be two states, it helped people to understand that he doesn’t want peace. He wants to claim the land from the Palestinians. The only way we can end this is one state.

How much would it help Palestinians for the U.S. government to reevaluate its policy of support for Israel, as President Obama has recently indicated it’s doing?

It’s very good for the United States to start thinking about its support for the occupation. If the Americans stop the aid to Israel it would be the start of the end of it.

But also, we are a simple people. We want to see change on the ground. Not just talk here and in the United States and the United Nations about Israeli occupation. It’s not enough for Obama to say that he wants to lessen the political support but that the $3 billion in aid to Israel will continue. What does that mean? The $3 billion goes to the army. On the ground the army comes to wake me up in the middle of the night. They shot my son. They shoot my people. I live with night raids and with tear gas in my home every day. So the talk doesn’t help me. 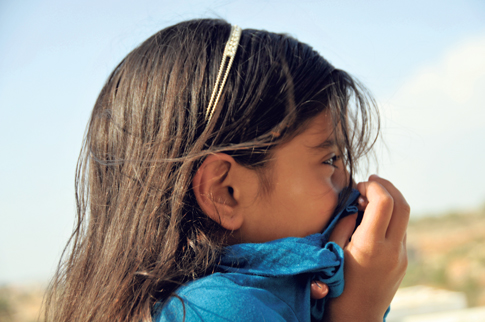 The resistance to the occupation in Bil’in is expressly nonviolent. What is the significance of that to you, and how does it relate to other nonviolent struggles?

We have a long history of nonviolent resistance here in Palestine. And we believe in the way of Mahatma Gandhi and the way of Martin Luther King, Nelson Mandela, all these people. Nonviolent resistance will succeed better than any other way. When you are nonviolent, the Israelis cannot use planes, rockets, live bullets or something more violent against you. And you can have everyone with you in the demonstration, including children and women, and other people who want to support you, like Israeli and other international activists.

Israelis often condemn Palestinians for throwing rocks at their soldiers. How does that fit into the nonviolent resistance in Bil’in?

So many people are asking the question: Why throw rocks? It fits into nonviolent struggle. Throwing stones at criminals is not a crime. They just want a reason to attack us — we’ve never heard about any soldiers being killed or injured by stones. And you know, it’s the same for the rockets in Gaza. When they say in the media that 500 rockets came to Israel in two days, people think that it’s an equal war, two sides fighting each other with rockets and missiles. But you know, one Israeli rocket killed 125 people in Gaza. Five hundred Palestinian rockets didn’t kill anyone in Israel.

They are talking about stones as violent, but they don’t talk about their own violence, the weapons they are using against us that are illegal under international law. So why? Where is the justice? We cannot tell our children that they’re wrong and shouldn’t throw stones. Because we see that our children are injured by live bullets, our friends are shot and killed.

You’ve been injured many times during the demonstrations, by tear gas canisters, rubber bullets, more. Do you ever think that you want to stop?

For me? No. I will never stop before freedom. Maybe I won’t be able to have freedom for myself, but I don’t want my children to live my life. So I continue.

What does freedom mean to you?

I don’t know. You’ll have to tell me. I don’t live in freedom but I think it’s a good word.

Freedom is many things. It’s a good life. For example, I cannot take my daughter to see the sea. And she’s never been in the sea. Why? I’ve never been to Jerusalem, for example. I would like to take my kids to Jerusalem, to Jenin. To be without borders and checkpoints and danger everywhere. This is, I think, a part of freedom.

Resistance is also a way to be free. If your mind is free, you are free. But you know, I am very tired of the long life under the occupation. I want to rest. I want to have a peaceful life with my family. I want to live like you, a normal life. That’s it.

Florida Teen: My Beating by Israeli Police Was a “Taste” of Palestinian Life
By Alex Ellefson

Palestine: Between Selective Sympathy and Collective Punishment
By Jerome Roos