The four-year extension of the state’s rent laws enacted by the legislature on June 26 will do next to nothing to stem the escalation of rents and the hemorrhaging loss of affordable apartments in New York City and its inner suburbs.

The bill, included in the kind of omnibus measure that Albany slang terms a “One Big Ugly” — its multitudinous provisions include one that lets Governor Andrew Cuomo perform weddings — contains some token improvements to the rent-stabilization laws, which protect about 2 million people in 1 million apartments in the city and Nassau, Westchester and Rockland counties. It raises the threshold for deregulating vacant apartments from $2,500 per month to $2,700, with that figure indexed to the increases allowed by the city’s Rent Guidelines Board beginning next year. It slightly reduces the rent increases permitted for major capital improvements. It says landlords can’t claim an automatic 20 percent increase on vacant apartments if the previous tenant had been living there for less than four years and was paying less than the legal maximum. It increases the fines for landlords convicted of harassing tenants by $1,000.

It also extends the 421-a tax subsidy for housing construction for four years, so long as the real-estate industry and the building-trades unions can agree within the next six months on when construction workers on buildings getting those tax breaks should be paid prevailing union-scale wages. Separate “poor door” entrances are no longer permitted, but Mayor Bill de Blasio’s proposed “mansion tax” was killed. The reforms slightly increase the percentage of below-market apartments that developments in the program must include — the mayor’s office says that the new 421-a will create an additional 11,600 affordable units over the next 10 years, though it does not require any that people who make less than $31,000 a year can afford.

The “Big Ugly’s” biggest failure, however, is that it does not repeal the 1997 state law that lets landlords deregulate vacant apartments. The Community Service Society estimates that 87,500 apartments will be taken out of rent stabilization over the next four years.

This was a crucial failure, because that enables the continued erosion of rent regulations. If current trends continue, given inflation and people moving, eventually the only regulated apartments left in the metropolitan area will be a handful occupied by the elderly and in the city’s poorest areas. Vacancy deregulation also gives landlords a lucrative incentive to harass rent-stabilized tenants, especially in gentrifying neighborhoods.

Although Mayor de Blasio advocated repealing vacancy decontrol, he undermined its chances when he endorsed renewing the 421-a program. As that program was also expiring this month and real estate wanted it badly, it could have been a bargaining chip to win concessions from the Senate. The mayor’s deliberate omission of a prevailing-wage requirement in his proposal also infuriated the city’s building-trades unions — who are strongly pro-development, but have been increasingly allied with tenant groups over the past two years in a campaign to ensure that “affordable” housing is built union. His support of nonunion construction also gave Cuomo the opportunity to hypocritically whack him as “anti-worker.”

The failure to repeal vacancy decontrol reinforces the most fatalistic view possible of Albany — that strengthening rent regulations is impossible as long as the Republicans have a majority in the Senate (or a Democratic majority narrow enough so a few switching sides can flip it, as happened in 2009 and 2011). New York City can’t enact stronger rent laws on its own because of a 1971 state law that accompanied a short-lived attempt to decontrol all vacant apartments.

The Senate is gerrymandered for GOP control by drawing all upstate districts with the legal minimum population and all city districts with the legal maximum. This cheats the city out of at least two seats. Districts are also geographically gerrymandered. To protect Martin Golden of Bay Ridge, one of two Republican senators from the city, the mostly black and Latino housing projects of Coney Island and Bensonhurst, contiguous to his district, were excised and connected to Democrat Diane Savino’s Staten Island district by the outer edge of the Belt Parkway.

In an honest political environment, this might not be relevant. Upstate and Long Island Republicans might be ideologically opposed to rent regulations, but they could conceivably be willing to trade votes on the issue for something that actually affects their districts. But with the New York City real-estate industry the biggest single funder of GOP legislative campaigns, they are not going to bite the hands that buy their ads.

Governor Cuomo, also heavily financed by real-estate interests, has contributed tremendously to this situation. While he endorsed the one-house Assembly bill that would have repealed vacancy decontrol, he did nothing to get the Senate to approve it. Cuomo’s supposed support for stronger rent laws is as empty as his support for medical marijuana — yes, the state legalized it last year, but due to restrictions he insisted on, no actual sick people will be able to receive any actual cannabis.

Cuomo also enabled the Republicans to retain control of the Senate in 2012, when he accepted their gerrymandering plan. Last year, in order to win the Working Families Party endorsement and avert a strong third-party challenge to his re-election, he pledged to campaign for Democratic Senate candidates — and immediately reneged on it, making only a few token, last-minute appearances.

The deal “proves that Albany is just as dysfunctional and money-driven as ever,” the Real Rent Reform coalition said in a statement. “This deal is a sellout and a betrayal by a governor who ran as a Democrat and promised to stand up for tenants, but governs as a pro-corporate Republican who’s only looking out for the millionaires and billionaires who fund his campaign,” added Ava Farkas of the Metropolitan Council on Housing. “We are disappointed, but unfortunately not surprised. Money and corruption won, and tenants and working families lost.”

A version of this article originally appeared on Gothamist.

SIGNS OF THE TIMES 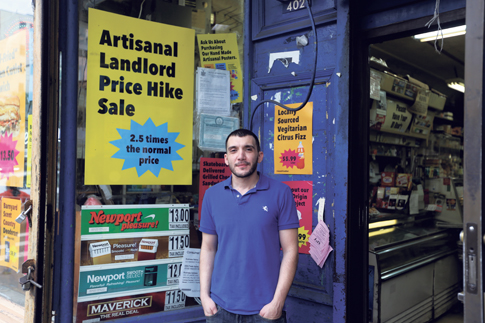 Soaring commercial rents are driving New York’s small businesses into the ground. In Boerum Hill, Brooklyn, the owners of Jesse’s Deli face eviction at the end of July because they can’t afford a rent hike from $4,000 to $10,000 per month, says Mohamad Itayim (right), founder Jesse’s son. The neighborhood, including the designers of the anti-gentrification posters in the deli’s windows (far right) has rallied in support of the 25-year-old deli. But, the landlord hasn’t budged. 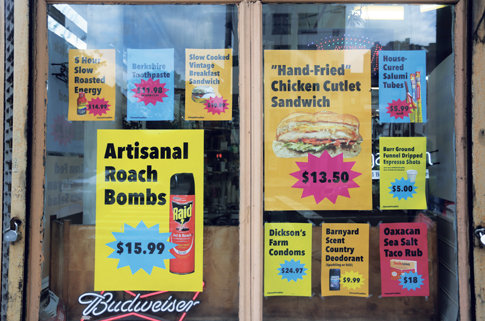