Doris Salcedo
The Guggenheim
Through October 12

Doris Salcedo’s untitled sculptures (1989-90) start with some white button-down shirts, sitting in piles on the gallery floor. They look, at first, like ordinary dress shirts, neatly stacked and folded. A closer look shows that the shirts are totally coated in plaster: no longer soft, pliable or translucent, now taking on a hardness, a heaviness and an opaque, stony whiteness normally befitting a tombstone. And there’s another thing. Each stack has a dark, solid piece of steel rebar stuck through it — around where the breast would be — reaching stalk-like toward the ceiling.

As with much of Salcedo’s art, these sculptures reflect on a particular, tragic occurrence. In March 1988, the Colombian military murdered 20 workers at the La Honduras and La Negra farms, all of them members of a local banana workers union with suspected ties to a leftist guerilla group, the Popular Liberation Army (EPL). They were all dragged from their homes in the middle of the night and summarily executed. The work does not present documentation, recreations, historical artifacts or even a title; what it gives us is a haunting sense that something is missing and that something has gone very deeply wrong.

Salcedo’s art — the subject of a retrospective currently on view at the Guggenheim — is focused mainly on violence in her native Colombia; sadly, she has no shortage of subject matter. In 1948, Colombia entered into a brutal, decade-long civil war known as “La violencia.” Since then, between the state military, far-right groups, the Revolutionary Armed Forces of Colombia (FARC) and drug cartels, the war has never really stopped. According to a recent article in The Guardian, “The conflict is the world’s longest continuous war,” having caused more than 200,000 deaths and the internal displacement of over 5 million people — roughly one-tenth of the country’s population. Virtually everyone in Colombia has been affected on some level by this conflict, and no Colombian under 66 has experienced lasting peace.

Salcedo’s art exists at this intersection of daily normalcy and violent terror. These are two conditions that you would think, or hope, to be at complete and total odds with each other, but which all too often come to inhabit the same place at the same time. Salcedo’s response is to conjure up a trenchant, mournful sense of burden and bearing. Much of her work is, literally, heavy: the series of untitled sculptures made between 1989 and 2008, for example, involves found pieces of stately wooden furniture filled with metal and concrete. These works suggest a longing for a bygone way of life, a past that continually recedes into the distance.

There’s a problem that comes up whenever artists try to portray the experiences of oppressed, marginalized or displaced groups: Too much emphasis on suffering can, ironically, minimize that suffering in the public imagination. That is, if a group of people is perpetually depicted as doing nothing but suffering, those representations feed into reductionist assumptions that suffering is their “natural” state of being and that it can never be otherwise. Salcedo looks into the particulars of events — she’ll even do first-hand research by investigating sites, conducting interviews, etc. — but she doesn’t tell us how, exactly, one particular group or one particular country has suffered. Instead, she ties the sorrow of Colombia’s long-simmering war to universal themes of loss and lament. Salcedo’s art is not about war, but about the ways people experience war. Her art is about the way war feels. 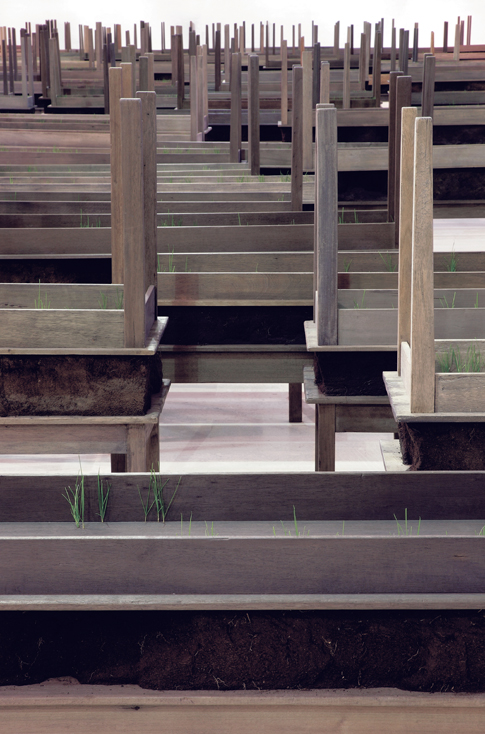 As of this writing, Colombian officials are engaged in peace negotiations with the FARC, and it seems that one of the biggest obstacles to future peace is a lapsed recognition of past atrocities. According to the news site Colombia Reports, “making concessions prove[s] difficult as both parties face thousands of accusations of war crimes that according to international law may not remain in impunity.” Still, there’s hope that these talks could bring an ultimate end to the conflict. With themes of death, there are also themes of recovery and rebirth. In Salcedo’s Plegaria Muda (2008-2010) — a work influenced by gang violence in both Colombia and the United States — pairs of large, coffin-like tables encase small chunks of earth, and between cracks in the tables small, vibrant blades of grass can be seen. Much like a tombstone is erected at death to honor a life, Salcedo's work evokes ideas of both ending and beginning: the violence, and the peace that surrounds it.