“Amandla!” The call rang out across a grassy field in Marikana, South Africa, where thousands of supporters of mineworkers and their families gathered Sunday to mark the third anniversary of the shocking shooting deaths by police of 34 miners striking for better wages and working conditions.

The shootings were described as a massacre in the South African media and were compared to the Sharpeville massacre in 1960. In addition to the fatalities, more than 70 miners were injured and approximately 250 were arrested in clashes with security forces at that time. On Sunday, there were 60 other simultaneous demonstrations across South Africa in addition to the main one at the site of the massacre.

Here in New York, close to 100 protesters picketed in solidarity outside the South African consulate on 333 East 38th Street on Sunday. Many of them were members of the Professional Staff Congress, the union that represents 27,000 faculty and staff at the City University of New York.

“What do we do when we’re under attack? Stand up, fight back!” chanted the crowd.

“Right now the majority of exploited in the world are South African and South Asian and they’re fighting for dignity,” declared Immanuel Ness, a political science professor at Brooklyn College. “The protests among the Black working class are expanding into a major movement.”

Ness was fresh from a research tour that included a stop in South Africa and the University of Johannesburg. Other speakers at the rally included Barbara Bowen, president of the PSC; Sharon Persinger, a PSC officer and a professor of math and computer science at Bronx Community College; and Raymond Blake, a student at the Borough of Manhattan Community College.

Top officials from some of South Africa's leading insurgent unions have traveled to New York twice this year and met with their counterparts in progressive U.S. unions. Radical South Africans unionists also held a mass demonstration outside a U.S. Consulate in Johannesberg on March 19 to demand justice for Michael Brown and Eric Garner and an end to police killings of Black men and women in America.

"The South Africans feel there has to be international solidarity not only among workers but against racism and police brutality," Jackie DiSalvo, one of the organizers of Sunday's protest, told The Indypendent. 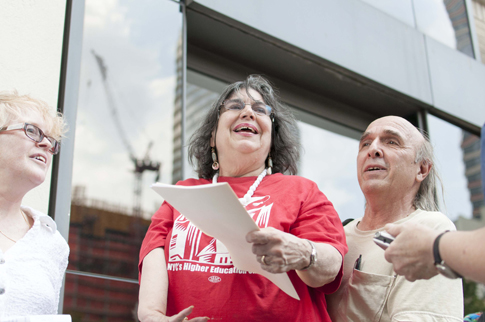 A letter from Trevor Ngwane was read in support of Sunday’s solidarity actions in South Africa, New York, California and other venues. Ngwane, a South African socialist and anti-apartheid activist, previously worked as a sociology lecturer at Wits University, where he helped found the Wits Workers’ School to teach literacy to the campus cleaners and gardeners.

“There’s a growing frustration among working-class people,” Ngwane said in a recent interview. “(They) see the ANC as incompetent because of what is viewed as the government serving the interests of the rich and not the poor.”

“There is a phrase here saying, ‘the rich are getting richer and the poor are getting poorer.’”

Ngwane called out pro-government unions, especially COSATU, the biggest trade union federation, for failing to lead a fightback. “This has created a lot of contradiction leading to disintegration,” he said. “In fact, Marikana was a turning point; it was the straw that broke the camel’s back.”

That turning point took place in August 2012, when rock drillers at the Lonmin platinum mine launched a wildcat strike demanding a pay raise from approximately $400 (U.S.) to $1,500 monthly.

Jeffrey Matunjwa, of the insurgent Association of Mineworkers and Construction Union (AMCU), said at the time: "As long as bosses and senior management are getting fat checks, that's good for them. And these workers are subjected to poverty for life. [After] 18 years of democracy, the mineworker is still earning 3,000 [South African rand — approximately $360] under those harsh conditions underground."

The wildcat strike also brought a controversial figure into the media spotlight. Julius Malema, the head of the Economic Freedom Fighters (EFF), the third-largest party in both houses of Parliament, was a radical voice for many of the frustrated miners. At the time, he demanded the resignations of President Jacob Zuma and Police Minister Nathi Mthethwa, claiming that police were protecting the interests of the one-time trade union leader and now deputy president under President Zuma, Cyril Ramaphosa.

Ramaphosa, a former anti-apartheid activist who in the 1980s founded the National Union of Mineworkers, had held a seat among the Lonmin mine directors. He was later cleared of responsibility for the Marikana mine disaster and is now one of South Africa’s most successful businessmen. Last year he made Forbes magazine’s list of Africa’s 40 Richest People.

Malema, an invited speaker at the Sunday commemoration in Marikana, continued to blast the deputy president. “Just being Black does not make you progressive,” Malema said. “Like Cyril Ramaphosa, all the Blacks who work with white monopoly capital are Black outside but white inside.”

He closed with the Zulu and Xhosa word for power. “Amandla!” 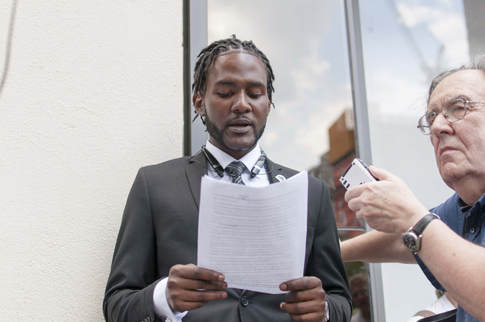 Also mentioned at the Marikana rally in South Africa was the issue of justice for the families of the victims. It was noted that more than 300 civil claims against the presidency and police ministry have been filed. “The amount of claims we have made is around 3 million rand per person,” said their attorney Andries Mkome.

“The state should offer compensation to the families of the Marikana victims as well as the injured and arrested miners,” said a spokesman for the Council for the Advancement of the South African Constitution (CASAC).

Further, according to CASAC and Amnesty International, President Zuma must suspend all officers implicated in the shooting after a commission found that police abandoned a plan to encircle the strikers with barbed wire, but carried out instead a “tactical option which was defective in a number of respects.”

The Sunday event in Marikana was organized by AMCU, now the majority union in the area. Their signature green union T-shirts could be seen everywhere.

Meanwhile, in New York, Luke Johnson, a New Yorker, commiserated with the Lonmin strikers. “It’s important to unite with our brothers over the lack of employment, health care and housing. We’re tired of being hunted down like dogs.”

There was no sign of the South African Consulate staff at the rally. By the end of the action, however, 18 police cars and an NYPD mobile communications center were spotted within a block of the protest. 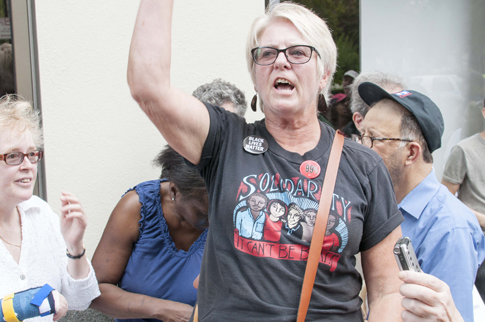 The lack of strong union leadership in Marikana reminded retired bus driver and shop steward Dan Ryan of his years with the Amalgamated Transit Workers Union and its leadership at the time “refusing to take us out on strike despite starvation wages.”

Carol Gay, president of the New Jersey Industrial Union Council, also recalled how South Africans showed support in the 1980s for strikers at the 3M plant in Freehold, New Jersey, which later closed. “South Africans have always been such an inspiration,” she said. “We’re here to honor them and to say that we’re here to support their demands.”