It was a rainy December night in 2012 when Cara Cancelmo began the short walk from a friend’s apartment to her parents’ home on the Upper West Side. The 18-year-old college freshman was home for a holiday visit. When she reached 93rd Street and West End Avenue, she looked both ways before beginning to cross the street, just as she had learned to do from an early age growing up in New York. A moment later a taxi cab crashed into her.

Cancelmo’s right shoulder was shattered, requiring reconstructive surgery and leaving her with a permanent disability. Now 21, Cancelmo is unable to lift her right arm behind her head. Everyday tasks like getting dressed, opening a package or chopping vegetables are a challenge for her. She experiences pain that moves down from her shoulder to her elbow and wrist and then to her hips regularly.

“I’m living with this pain that doesn’t go away,” Cancelmo said, “and having to contend with that as my reality for the rest of my life is pretty anxiety-provoking.”

Cancelmo has responded by turning her pain into advocacy as a summer fellow with the advocacy group Transportation Alternatives and as a member of Families for Safe Streets, an organization comprised of people whose lives have been impacted by traffic crashes. On July 14, she addressed a crowd of hundreds of people who gathered at Union Square for a vigil to honor the memories of those have lost their lives or been injured in traffic crashes this year on New York’s streets.

“Do we want to live in a city where even when we are perfect pedestrians or cyclists, cars can still injure, maim and kill without consequence?” She asked the crowd.

The vigil, which was also attended by a number of local elected officials, was called to show public support for Vision Zero, an ambitious plan to reduce the number of traffic-related fatalities and serious injuries in New York City to zero by the year 2024. First adopted in Sweden in 1997 as a conceptual framework for ending traffic mayhem, Vision Zero was embraced by Mayor Bill de Blasio in January 2014 at the beginning of his term in office.

A year and a half later, New York City remains a long way from reaching “zero.” At the vigil the names of the 127 traffic fatalities from the first six months of 2015 were read aloud, including 54 pedestrians and five cyclists. During that same time, 24,890 people were injured in traffic crashes, according to Transportation Alternatives. Of these more than 4,700 were pedestrians like Cancelmo. For advocates and policymakers, Vision Zero is a multi-pronged effort to change everything from laws and how they are enforced to the configuration of the city’s streets while transforming a culture that tolerates reckless driving. 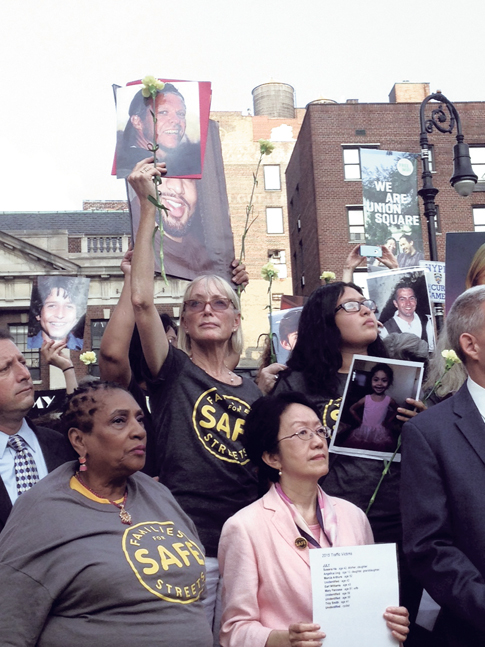 Hundreds of people including local elected officials gathered in Union Square on July 14 to show their support for Vision Zero. Photo: Janaki Chadha

2014 was a landmark year for Vision Zero advocates. The City Council approved 15 new traffic laws, including a bill that lowers the city’s default speed limit from 30 to 25 mph, an important move as several studies have shown that even small decreases in the speed of a vehicle can have dramatic effects on the severity of the impact during a collision. A right of way law now makes it possible to charge drivers with a misdemeanor crime if they kill or injure a pedestrian due to a failure to yield. This is a dramatic change from the long-standing practice of assessing nothing more than a fine for a traffic violation against sober but reckless drivers who kill or injure.

“Despite some improvements made in some precincts, it’s really varied,” said Caroline Samporano, deputy director of Transportation Alternatives.

The move toward safer street designs is also a core part of Vision Zero, particularly in terms of improving safety on arterial roadways. These heavily-used streets host high-speed traffic and witness a disproportionate amount of the city’s pedestrian and cyclist deaths, despite making up only 15 percent of New York City street mileage.

“Taking the street that has always been known and accepted to be the ‘boulevard of death,’ and saying ‘no, we expect and we’re going to deliver a different outcome because that’s what New Yorkers deserve’ is really powerful and important,” said Samponaro on the redesign of Queens Boulevard. “[It’s] symbolic but also real, tangible investment in Vision Zero that’s happening right as we speak.”

De Blasio’s willingness to use the punitive arm of the state to change driver behaviors has not been matched by the same willingness to invest money in the remaking of the city’s streets to be multi-user friendly. Samporano voiced frustration that de Blasio was only bringing the Great Streets program to four high-profile roadways while Stephen Miller of Streetsblog.org said he was disappointed in the lack of funds in the 2016 fiscal year budget for more low-cost street redesigns.

“The most promising way to get fast results from street redesigns,” he wrote in a post, “is through ‘operational’ projects that use paint and other low-cost changes to calm traffic, rather than waiting years for the city to design and build an expensive capital project.”

Samponaro agreed, saying, “I think that’s something that next year we’ll be focused on shining a light on.”

Vision Zero has drawn comparisons to the 1980s-era crusade that permanently changed how our society thinks about drunk driving, which was once widely tolerated as a matter of personal choice and not a crime.

At July’s vigil, participants vowed to stop using the word “accident” when referring to traffic collisions. For many safe streets advocates, the frequent dismissal of traffic deaths and serious injuries as unavoidable on the part of drivers is at the forefront of what they are trying to change.

For Cancelmo, telling people she lives with a permanent shoulder disability often invites questions. “[People ask], how did that happen, how did you break your shoulder? And I tell people that I was hit by a cab and then they say, was it your fault?” She adds, “I think we definitely have a culture in this city of blaming the victim about this issue and I think that we do it because we somehow think that if it were that person’s fault, then it can’t happen to [us].”

She hopes that, through her activism, along with bringing about change, she can end the isolation she’s felt. “There are thousands of people walking around who have had similar surgeries to mine, similar injuries, similar rehab processes,” she says. “If they heard my voice I hope that they would see that there are people who care, and there are people who know that this happens and are trying to make it never happen to anybody else.”