Black Panthers: Vanguard of the Revolution
Directed by Stanley Nelson (2015)

Cops slam every young Black male on the block against the hoods of the cars lining the street. Cuffs are slapped on them as the police pat them down, looking for guns and drugs. If they ask why they’ve been stopped, they only invite further violence and possible arrest. It’s a scene set in 1988-era Compton, California, but it could have just as easily been shot in 1965 Oakland — or 2015 New York. Recent incidents from Staten Island to North Charleston have made it abundantly clear that police brutality did not end with the March on Washington or the integration of police forces.

Hot on the heels of the emergence of the Black Lives Matter movement come two films about how previous generations of African-Americans in the North reacted to endemic poverty and police harassment, Straight Outta Compton and Black Panthers: Vanguard of the Revolution.

On one level, the two movies could not be more different. The N.W.A biopic is a confection tailor-made for the multiplex, larded with conspicuous consumption and naked women, careening from one set piece giving a capsule history of West Coast rap to another. The documentary about the Black Panther Party is geared to an art house crowd, filled with substantive interviews of former party members and playing in a few select cinemas.

But the similarities abound. Both films are propelled by the sounds of their time: West Coast gangsta rap for Straight Outta Compton and soul and funk hits for Black Panthers. Both films compress an entire era into a short overview, inevitably giving short shrift to key players. And their subjects even shared a sartorial sense: the Black Panthers’ black berets and leather jackets were echoed in the black T-shirts, jackets and (L.A.) Raiders caps donned by their SoCal successors.

It is no coincidence that the Black Panthers and N.W.A (short for Niggaz Wit Attitudes) both came out of California, exposing the state-sanctioned violence and desperate deprivation that was the dark underbelly of Ronald Reagan’s saccharine promises of “Morning in America.” In the words of criminologist Jonathan Simon, “California is to [mass] incarceration what Mississippi was to segregation — the state that most exemplifies the social and legal deformities of the practice.” 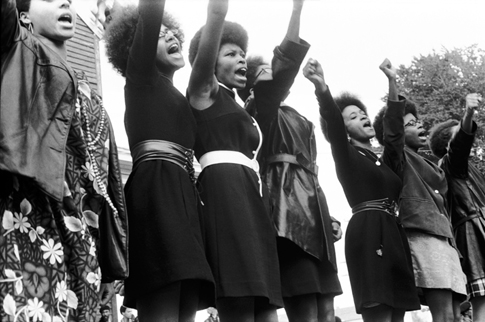 Members of the Black Panther Party call for the release of jailed party leader Huey Newton at a 1969 rally in Oakland, California. Image courtesy Pirkle Jones and Ruth-Marion Baruch

The Black Panthers and N.W.A were united not only by their shared experiences of oppression in the ghettos of California, but also by their shrewd instincts for spectacle. Both groups acquired national profiles through the strategic cultivation of controversy and confrontation with reactionary white lawmakers. The Panthers, initially conceived of as a cop-watching group, captured public attention after taking advantage of California’s open-carry laws to show up at the statehouse packing machine guns. They were opposing, in their incendiary style, the efforts of then-Governor Reagan and his allies to take away their guns. N.W.A, meanwhile, went out of their way to provoke law enforcement and white politicians pandering to the “silent majority” by decrying gangsta rap. The most electrifying moment of Straight Outta Compton is when N.W.A defies the order of the Detroit police not to play “Fuck tha Police” in concert, helping incite a riot — and getting arrested in the aftermath. Defiance of the state’s claim to a monopoly on legitimate violence may never have looked more fun.

Straight Outta Compton is a study in what happens to the rage born of racial oppression and relative deprivation in the absence of politics. It is the failure of groups like the Panthers and the curdling of hope for systemic change that created the conditions of possibility for N.W.A. The members of N.W.A were occasionally thrust into an ill-fitting position as ghetto spokesmen and advanced a social critique in some songs. However, their focus was not on protest — let alone collective uplift — but on getting ahead. In Straight Outta Compton, pervasive police harassment mostly serves as a backdrop justifying the braggadocio and claims of N.W.A to be documenting the reality of their day-to-day lives in their rhymes. When the people of Los Angeles acted out the rage against police brutality that N.W.A gave voice to in their songs, far from joining in or providing leadership, the movie shows the rappers driving through the Rodney King riots on the way to their new suburban mansions. And unlike the Panthers, who largely backed off their initial macho posturing and elevated women to leadership positions, Straight Outta Compton — whose producers included Ice Cube and Dr. Dre, two of N.W.A’s original crew — has no seeming compunction about glamorizing unbridled misogyny.

While the Black Panthers cannot be accused of lacking politics, the same cannot be said of director Stanley Nelson’s documentary. Viewers without a prior steeping in the history of Black radical thought will likely leave theaters with little idea of what the Panthers stood for outside of their 10-Point Program. The ideological divisions and Maoist tendencies of leading figures are obscured, with the rift between Huey Newton and Eldridge Cleaver largely reduced to a personality-driven feud between a paranoiac drug-addled thug and a militant intellectual pontificating about revolution. Although reductionist, in some ways this blurring of the fine points of their politics is a shrewd move: Socialism may no longer be the dirty word it once was in American politics, but the Little Red Book has little claim to relevance outside a few isolated sects of the hard left.

Although Black Panthers only has time to hit some of the Party’s highlights, it is mostly successful in bringing out the continued relevance of a movement for collective liberation led by those most affected. While elders may snipe about its admittedly real limitations, the film offers an energizing and stylish introduction of the Panthers to a new generation. The Black Lives Matter movement could do worse than learning from the example — and the failures — of the Black Panther Party if they want to not only fight individual incidents of police brutality, but also organize against a system of racial domination. The Black Panthers eventually collapsed under the weight of state repression and internal conflict, but for a brief moment they were a party — a nationwide group with its own newspaper, community social programs and political platform that managed to unite the energies of thousands of militants in a common struggle. Whatever the organizing possibilities of social media, the activists of Black Twitter have yet to build a comparable infrastructure. Straight Outta Compton offers no such lessons, but it is a mostly entertaining 2.5 hours — and “Fuck tha Police” remains essential listening.