Individual wars are always complex, and yet war itself can, sometimes, feel like something simple or pure. In War Is a Force That Gives Us Meaning, Chris Hedges writes of how “war makes the world understandable, a black-and-white tableau of them and us.” Tales of noble, virtuous wars are mixed into the bedrock of religious traditions — in the New Testament, for example, Christ rides a white horse out of heaven, “and in righteousness he doth judge and make war.” As aphorized by the sinister Judge Holden in novelist Cormac McCarthy’s Blood Meridian, “War is the truest form of divination. … War is god.” 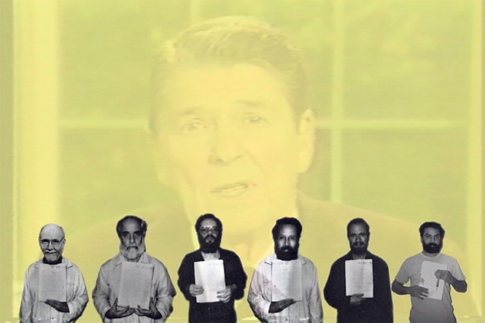 But if you want to talk about something complex, take a look at the Lebanese Civil War. That conflict lasted for 16 years, from 1975 to 1991, and involved a grim cornucopia of sectarian and secular militias, religious groups, political parties and other countries fighting out proxy wars. For Lebanese artist Walid Raad, the war has always been a subject of fascination. As a child growing up in late-1970s Beirut, Raad collected bullets and shrapnel after days of fighting, keeping detailed notes of where wartime detritus was found and what colors the bullet tips were (bullet manufacturers use colors to identify their products). These detailed notes would eventually form the basis of Let’s be honest, the weather helped (1998-2006), a series of printed notebook pages in which brightly colored dots representing the found bullets are overlaid on gritty black-and-white photos of the sites of conflict. The end result falls somewhere between scientific reportage, grade-school homework and avant-garde collage. On a nearby wall in Raad’s current survey exhibition — up now at the Museum of Modern Art — there’s We Decided to Let Them Say “We are Convinced” Twice (It was More Convincing this Way) (1982-2007), which covers some similar ground. For this series, Raad revisited photos of Israel’s 1982 siege of Beirut that he shot when he was 15. Though the negatives were “carefully preserved,” the prints are mottled and hazy with strange pink and blue coronae, as if a dark energy had been bearing down on them while in storage.

Or, maybe not. The aforementioned works are part of Raad’s remarkable long-term project The Atlas Group (1989-2004), in which he positioned himself as not so much an artist as an archivist or historian presenting mysterious documents rescued from a lost era. This framework is fictitious, and within it the material — evidence, so to speak — becomes unstable. Did a prepubescent boy really keep such handsome, meticulously compiled notebooks? What are the unnamed disturbances that added corrosive color to those black-and-white negatives? Is it really true that the monochrome blue photos of Secrets in the Open Sea (1994) were not only discovered under wartime rubble, but also contain latent images of men and women who drowned in the Mediterranean over the course of the war? And, did the video known as I Only Wish That I Could Weep (2002) really come from a Lebanese Army officer who, instead of doing his job videotaping pedestrians on a seaside boardwalk, decided to train his camera on the sun as it set, slowly, over the ocean? 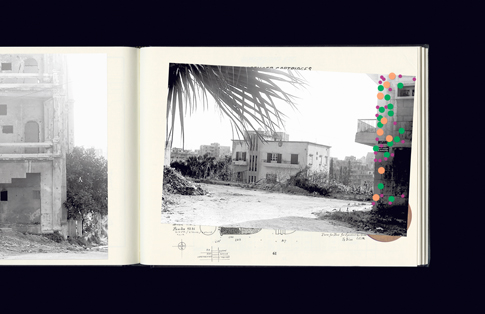 More recently, Raad has turned his attention to art history and the art world, specifically in the context of wealthy Mideast cities embracing the globalized art market. Here, Raad presents documentary materials such as floor plans, postcards and financial documents with a bristling current of bizarreness: He tells of objects that have somehow ceased to reflect light or cast shadows, and of messages sent telepathically from the future. In a performative exhibition walkthrough that Raad is doing throughout the show’s run, he (or perhaps a lookalike actor playing Raad?) speaks of how colors are forever altered by war, and tells the story of how his own artwork shrank down to dollhouse size when he tried to exhibit it in Beirut’s first Western-style “white cube” gallery.

This tension between fact and fiction is at the core of Raad’s practice. It often feels as if Raad’s art has emerged from a parallel plane: a world similar to our own, but with some intractable discord at work. It’s a kind of estrangement that, perhaps, reflects the incompatibilities between civil society and life during wartime, rendering the state of war as one of perpetual alienation and remoteness.

This art, then, is a challenge to the concept of war as a wellspring of noble heroism, or as a site of truth or divinity. War is clouded memories, unnamed trauma, confusion and ruptures that can only be understood in retrospect, if that. The Lebanese Civil War began when Raad was about 8 years old, so we can assume that for him, coming to know the world also meant coming to know the war. This art tells us that war is something that cannot — and should not — be known.