For refugees arriving in Europe, surviving their journey from war-torn regions of the Middle East and Africa is only the first step. What follows, The Indypendent learned from speaking with refugees and their allies, is a long and difficult experience in which the strongest support often comes from networks of other refugees.

Khaled: A Mechanic Reassembles His Life

I’ve lived in Spain for a year and a half now. I am 24 years old. I’m originally from Damascus, Syria, where I worked as a mechanic. I left when the revolution in Syria began in 2011 and the government started recruiting young boys to turn them into soldiers, to kill people. My uncle, who has been living in Spain for five years, took me in. I came by plane. First to Beirut and then to Madrid. I was in Lebanon for three months waiting for my papers; that’s where I encountered racism. I would talk to people and when I told them I was from Syria some would say, “That’s disgusting.”

My parents stayed in Syria. My little brother, who is 20 years old, went to Germany; he also fled so he wouldn’t be recruited by the Syrian army. His journey to Germany started overseas. First he got to Turkey, then took a boat to Greece and then traveled to the other countries. It took him almost a month to get to Germany. Before, a lot of people came to Europe by plane, but now it’s not as easy. 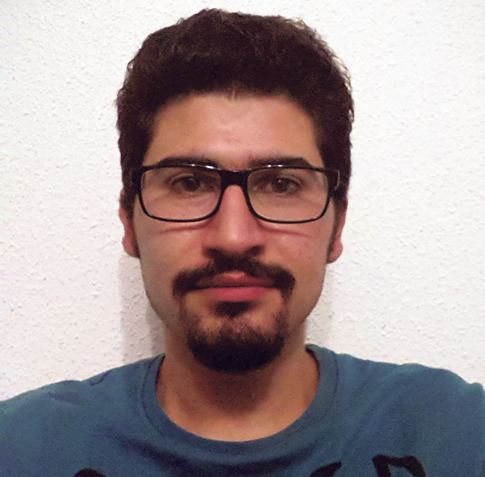 Khaled worked as a mechanic in Damascus, Syria.

He went to a refugee camp in Germany with an NGO and there they helped him with his paperwork. I was in contact with him while he traveled. My sister remains in Syria and she wants to come to Europe with her husband. I think that taking the boat is one of the only solutions for getting out of Syria.

My mother won’t leave Syria. “I have been here for so many years, what am I going to do out of here?” she says. But life in Syria is very dangerous. There are soldiers and tanks on the street and you can’t leave your house, you can’t do anything. What scares me the most is that my family is still in Syria and that every ten minutes things can change.

In Spain it’s harder for the refugees than in Germany. I’m going to stay in Spain because my papers are here and the language is easy, but there is almost no economic assistance. People are nice but life is hard due to Spain’s economic crisis. In Germany the government helps you get a house. My brother is currently living in a flat and every month he gets about 400 euros.

For a while I was working in a company that made potato chips. It was a very hard job. Sometimes we worked at night and other times during the day. With that job I couldn’t rest, I couldn’t do anything. What I really want to do is continue my studies as a mechanic. I really like that job.

When I first got to Madrid I turned to the Asociación de Apoyo al Pueblo Sirio (Syrian People Support Association). They have helped me a lot with my papers and other issues. There are a lot of people in Madrid who don’t understand or know about the problem in Syria.

Now I help with the refugees who arrive from Syria, which are quite a few. I write down their name, number, where they came from and who they are traveling with. A lot of people come alone and most of them continue to travel to other countries.

I think that the war in Syria will last more than 10 years. I want to go back but I don’t know when I will be able to.

Daniela: ‘You Become Politicized and Empowered’

Daniela Ortiz is a Peruvian artist who is currently living in Barcelona, Spain. Part of her work focuses on the migratory control system.

I am part of the organization called El Espacio del Inmigrante. It opened three years ago when the government changed the law in regards to the health care system. We realized then that the immigrants were literally getting kicked out of the system. In Espacio del Inmigrante we have two levels of work; one offers free services, they created this after the health care situation changed. We also offer legal and psychological advice and work in a political frame in regards to the migratory system and on the empowerment of immigrants.

Initially when the EU established the framework that people weren't migrants but refugees, I thought this distinction was okay. Later it was awful to hear citizens repeating, "No, these are migrants, no, these are refugees. These are the ones we don't help."

At the beginning when you feel that you are boosted to create your identity as an immigrant or refugee you reject it and say "No, I'm a human being." After, there is a moment when you embrace the identity as an immigrant and say, “Screw you. Yes, I'm an immigrant and I'm here and I have all the right to live here." Once you are conscious of how the system works you become politicized and empowered, you understand. This gives you a tool to not go crazy, because psychologically applying for a nationality destroys you just by the way you’re questioned.

In Vienna for example there is a lot of solidarity among some communities. The economic situation is better than in other European countries. People can receive refugees in their house because they have more space to organize this type of situation. Many times what the refugees need is not so much food or clothes but being able to be with other people who are in their same situation, help finding a lawyer that will work pro bono or help finding a bus station in case they want to move. The refugee-migrant network is huge. Usually, the refugees are the first ones to aid other refugees.

We have to understand that the deaths in European borders has been occurring since the 1980s. It’s crazy to see how the situation is reappearing but again there is no questioning the border controls. Talking about the situation as if it was all a natural disaster, and it’s not! I also find interesting the moments of exception. For example when the Hungarian journalist tripped a man and everybody was outraged. At the same time you have tons of policeman in the railways beating the refugees and running after them and nobody questions the force of the police because this is legitimized violence, the violence of the state. But if a journalist does it then we all say "no." It's normal that the police run after them but it's not normal that the journalist behaves violently.

I shouldn't be negative but when I read about Syria I can't help thinking that the situation is going to be much worse. Once there are more implementations on the deportations. They are saying they will invest more money in immigration detention centers, they are going to open a new Frontex office. So they are taking advantage of the situation to exercise more control and I don't trust it. The right wing is growing crazy in Europe and it's not a joke.

This is all really scary. Deportation processes are happening everyday and they are really violent and we are talking about massive deportations. I feel that in the last two years there has been a more radical speech by some groups of migrants in Barcelona. And I think that the resistance will be done by migrants and refugees themselves, with support of the social grassroots movements. There is a monopoly of power on the freedom of movement from an economical perspective and there is no real interest in solving the current situation.