Mayor Bill de Blasio says he has proposed “the largest affordable housing plan in the history of this city or any other city,” but it is drawing increasing opposition around the city.

The plan promises 80,000 new “affordable” apartments. To do this, it relies largely on adjusting city zoning regulations through “mandatory inclusionary housing” and “zoning for quality and affordability”: letting developers build more market-rate housing in slightly taller buildings while requiring that 25 to 30 percent of the units built be rented out at lower costs. More than two-thirds of the city’s 59 community boards have recommended rejecting it, with some saying they would accept it if the amount of housing produced for people who make under $40,000 a year was significantly increased. Bronx Borough President Ruben Diaz called the plan “unacceptable,” and City Comptroller Scott Stringer weighed in against it on Dec. 2. Grassroots groups in East Harlem, East New York, and the Bronx have been organizing against it for several months. 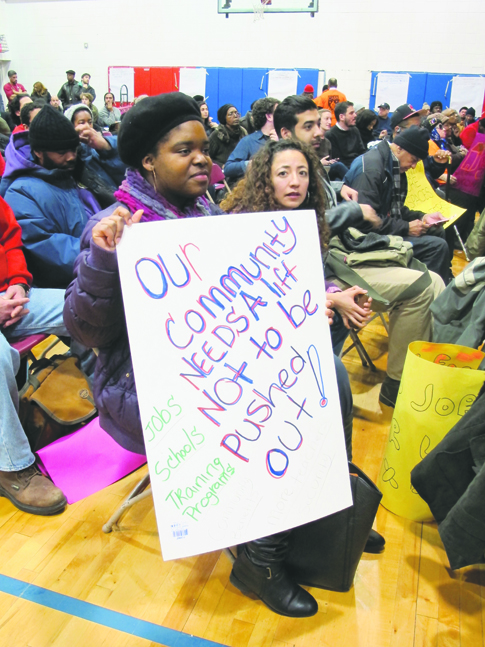 Hundreds of Bronx residents turned out during a blizzard last March for a forum organized by Community Action for Safe Apartments (CASA). Opposition was running high to a proposal by the de Blasio administration to rezone a 73-square block swath of land just north of Yankee Stadium. Photo: Steven Wishnia

The biggest criticism voiced is that most of the housing built wouldn’t actually be affordable. In the southwestern Bronx, the housing planned for the neighborhoods along the 4 train line on Jerome Avenue will be intended for “moderate income” people who make around $69,000 a year, says Joseph Cepeda of Community Action for Safe Apartments, but most current residents make between $8,000 and $32,000.

“You’re excluding this whole portion of the community,” he says. “You’re saying all the key words — ‘affordable housing’ — but you’re not giving us any substance.”

Opponents have also said that relying on the construction of luxury housing to create affordable housing will displace more people than it helps; that the plan is a “one size fits all” approach that is being rushed through without adequately considering the characteristics of individual neighborhoods; and that developers building the affordable units will not be required to use union labor.

The community boards’ role is advisory; the City Council will vote on the final version of the plan next year. But the level of opposition has vexed and perplexed the de Blasio administration, which argues that its inclusionary-zoning program “would be the most rigorous in any major U.S. city.” Unlike similar programs in Boston, Chicago, and Seattle, it says, developers will be required to include below-market housing. Unlike those in Denver and Los Angeles, that housing would be permanently affordable. And the amount reserved as “affordable” is by far the highest: 25-30 percent, with San Francisco second at 12-20 percent, L.A. requiring 15 percent, and Washington 8-10 percent.

The plan’s opponents are being impractical, says a spokesperson for the Department of City Planning. Requiring developers to include a higher proportion of below-market units or apartments that rent for less than $1,000 a month would not be financially feasible: They simply wouldn’t build anything, and 25-30 percent of something is better than 50 percent of nothing. Leveraging private investment to create moderate-income housing will free public funds for low-income housing, she adds.

The administration and the plan’s opponents, however, are using different definitions of “affordable.” The official definition is based on percentages of “area median income” for New York City and the three counties in its northern suburbs: 60 percent of AMI is considered “low income.” But as the median income for the city, about $53,000 a year for a family of three, is roughly two-thirds of the metropolitan AMI, nearly half of city residents would count as “low income.”

In East New York, where most people make less than 40 percent of AMI, 84 percent of the residents “will be unable to afford the market-rate units proposed under the rezoning, and 55 percent will be unable to afford the affordable units,” Comptroller Stringer said in a report issued Dec. 2. With nearly 50,000 people in the area living in buildings too small to be rent-regulated, “the introduction of thousands of new higher-income residents” would threaten to displace them by pushing rents upward.

The administration disagrees. Gentrification is already happening, and if no new housing is built, even more people will be displaced, says the DCP spokesperson. The administration has also earmarked funds to provide legal aid to tenants threatened with eviction, she adds, and while its zoning plans allow taller buildings along major streets like Atlantic Avenue in East New York, they discourage tearing down smaller residences on side streets.

“We are going to balance the market dynamics,” de Blasio said at a Dec. 10 press conference.

Displacement will be “the damaging part” of the plan, responds John Medina of Community Voices Heard in East Harlem. If new housing is built that’s more than two-thirds luxury, he contends, landlords in the neighborhood will see that they can get higher rents and escalate efforts to oust current tenants. “Housing Court is going to have lines around it for days,” he says.

CVH, along with other groups like the Movement for Justice in El Barrio and CASA in the Bronx, has been organizing around the plan since last winter, holding forums, meeting with community residents and businesspeople, and trying to develop alternative ideas. In East Harlem, CVH, Community Board 11, Council Speaker Melissa Mark-Viverito, Manhattan Borough President Gale Brewer, and various labor unions and community groups are preparing a plan to present to DCP early next year.

Alternatives proposed include basing the rents for affordable housing on income levels in community districts, espoused by Stringer and Manhattan Community Board 12 in Washington Heights/Inwood. (DCP says there would be legal problems with not having a single citywide standard.) CASA wants the construction jobs to be union, with apprenticeships to get neighborhood residents into the building trades. Stringer wants clear anti-displacement measures.

The Association for Neighborhood Housing Development has urged that the program be revised to give neighborhoods a “deep affordability” option, in which 30 percent of the units built would be reserved for households that make less than 30 percent of AMI; these would rent for about $625 a month or less. “More than 25 percent of New York City households make less than $25,000 annually,” it notes. Another possibility would be requiring all housing built under the program to include at least 15 percent apartments for that income level.

Why has this plan, which critics agree at least makes an effort to provide a significant amount of affordable housing, drawn more opposition than former mayor Michael Bloomberg’s blatantly gentrifying rezoning schemes?

“Bloomberg got away with this, but people are waking up,” says Joseph Cepeda. “We’ve already seen it happen, so we mobilized in advance.” The public is better informed now, adds John Medina: “With more transparency and a so-called progressive administration, people are going to hold elected officials accountable. They’re going to exercise their right to say no.”

“Unfortunately, the de Blasio Administration’s current MIH proposal misses the opportunity to create the guaranteed, truly affordable housing that many neighborhoods are demanding,” Association for Neighborhood Housing Development said in November. The proposal, it added, primarily targets people who make more than $50,000, “leaving out the more than 40 percent of New Yorkers that earn below these levels.”