Last week, I worked 94 hours,” Uber driver Jobayed Choudhury says, standing outside City Hall on Feb. 17. A 35-year-old immigrant from Bangladesh who’s married with two children, he points to a pay-stub message on his cell phone that showed he’d grossed $1,388 for 94.27 hours. After gas, car payments, tolls and insurance, he said, that worked out to about $900 net. He cleared barely $20,000 last year, he added.

Long hours and low pay were the biggest grievances Uber’s overwhelmingly immigrant drivers cited when they staged a 72-hour strike in early February, shutting down service at Kennedy and LaGuardia airports. “Friday I worked 19 hours. Saturday I worked 16 hours. Yesterday I only worked 8 hours,” said Alek, 29, one of several hundred drivers protesting outside Uber’s Long Island City offices on Feb. 1. (He did not want to give his last name.) A Russian immigrant and the father of a baby girl, he estimates that he averages between $7 and $8 an hour after Uber’s 25 percent commission, gas and tolls. He also pays $500 a month for insurance and $422 in car payments.

The strike was triggered by the company’s Jan. 29 announcement that it was cutting fares by 15 percent. That money comes directly out of drivers’ pockets, as they work for a percentage of the fares collected, on top of fixed expenses like gas, insurance and car payments. The fare reduction was the second in the past two years, and Uber has also increased the commission it takes on fares. New drivers have to pay as much as 35 percent. Sales tax is also deducted, and tips are “included” in the fare.

The reduction in incomes has left many drivers feeling like the victims of a bait-and-switch scheme. In 2011, the minimum fare was $12 and Uber took only a 10 percent commission, explained former car-service driver William Luciano, 43, of Brooklyn. Back then, he could make between $1,800 and $2,000 in a five-day week. But the minimum fare, the “drop,” is now $7, and Uber charges him a 25 percent commission.

“It was good back then, but things changed,” said Rafata Hussain, 27, of Queens.

Mostafa Abdal, 60, of Brooklyn, switched to Uber after more than 30 years of driving yellow cabs, because he saw ads that drivers could make $1,600 a week — ads he now calls “propaganda” and “garbage.” He quit a month ago and went back to a yellow cab. 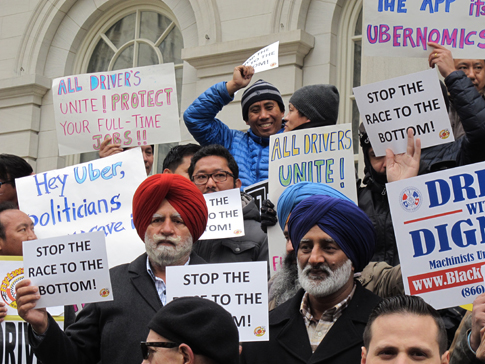 Bhairavi Desai, head of the New York Taxi Workers Alliance, a labor union advocating for yellow-cab, green-cab and Uber drivers, calls the rise of app-based cabs the biggest change in the taxi industry since the 1980s, when yellow-cab drivers were switched from working on commission to leasing their vehicles. That change increased the money drivers could make on a very good shift, but meant they had to buy their own gas and risked losing money on a bad shift — while the owner was guaranteed a lease payment. It also eliminated the drivers’ already weak union, as it made them independent contractors, who are legally prohibited from collective bargaining.

She says Uber’s business model is “driving us backwards to the Dark Ages.” Because it gets a percentage of every fare and has no investment in equipment — the drivers own and maintain their own vehicles — it can flood the streets with drivers, and it doesn’t matter how little they make because Uber gets its percentage.

She believes that Uber’s ultimate goal is using low fares and low wages to squeeze out competitors and gain a monopoly over taxi service, and it’s willing to take short-term losses to do that. “I think that’s what Wall Street expects them to do,” Desai said. “Why else would they have rates like Orange County’s and be flooding the streets with vehicles?” In Orange County, Calif., she explains, the drop is zero and the fare 64 cents a mile — and drivers make less than $5 an hour after expenses.

Uber also envisions developing driverless cars. “When there’s no other dude in the car, the cost of taking an Uber anywhere becomes cheaper than owning a vehicle,” CEO Travis Kalanick told a tech-industry conference in 2014. On the other hand, that might mean the company would have to pay for buying, insuring and maintaining those vehicles.

In New York, the Taxi Workers Alliance, along with the black-cab drivers represented by District 15 of the International Association of Machinists, want the City Council to pass laws and the Taxi and Limousine Commission to create regulations that would set a minimum fare for app-based rides, guarantee app-company drivers a minimum number of trips, give passengers the option to tip and require the companies to show that new drivers can make a living wage before expanding their workforce. They also want to establish a fund to cover workers’ compensation, disability, retirement and basic health benefits for drivers, said James Conigliaro of District 15.

The courts are another front. In California, a trial is scheduled for June in a class-action suit to declare Uber drivers employees instead of independent contractors. If workers are independent contractors, the company that hires them doesn’t have to pay into Social Security, disability, unemployment or workers’ compensation for them. The suit also seeks a ruling that drivers are entitled to be reimbursed for expenses like gas and vehicle maintenance, and challenges Uber’s instructing passengers not to tip drivers.

Uber, says Conigliaro, claims it’s not an employer and that the drivers are independent contractors, but, he added, “it controls the rates, it controls the dispatching of cars and it controls who gets work.”

Efforts to regulate Uber face a massive lobbying operation. Uber has hired David Plouffe — formerly a top adviser to President Barack Obama — as an executive. Last year, when Mayor Bill de Blasio backed temporarily capping the number of Uber drivers, the company slammed him with an ad campaign calling him a pawn of the medallion-cab monopoly, protecting racist drivers who won’t pick up black people and trying to “destroy 10,000 job opportunities.” The mayor dropped the idea.

Uber is also seeking state laws that would define it as a “transportation network company” exempt from the usual regulations for taxis. These are based on the legal premise that it is not a taxi company, just an app by which people who own cars can give rides to people who want them.

People like the cheapness and convenience of app-based cabs, Congliaro says, but “we have to think about what it does to our society.” Uber, he says, is “a company that’s proven they’re not into laws and regulations stopping them.”