"What the fuck is funny about a hunger strike?” As a comedian, Amer Zahr isn’t afraid to take on controversy. He is, after all, Palestinian.

He poses the question to me in a crowded café in Midtown Manhattan, only a few blocks from the famed Carnegie Hall, where Zahr and three fellow comedians were to perform the following night. On February 5, they became the first Palestinian-American comedians to grace that stage.

The hunger striker in question is Palestinian journalist Muhammad al-Qiq, who had refused food since November 25 to protest his administrative detention by Israel. Al-Qiq is one of over 600 Palestinians in Israeli custody who have yet to be charged with a crime.

Zahr hits the punch line: “I mean if you want to get the guy to eat, put some grape leaves in front of him. I don’t know what you’re putting in front of him, mansaf, maqluba, something. Yeah, it’s not hard to get an Arab to eat. It is not difficult. So, I’m supposed to be scared of these people when they can’t even do that?”

Zahr’s style of social commentary comes from a long tradition of political comedians à la Lenny Bruce, George Carlin and Dave Chapelle. But what makes him unique is that he showcases social realities not often covered by comedians or the media — namely, living under occupation and growing up as an Arab-American. More than that, he conveys an honesty that comes from knowing his cause is just.

Zahr was born in Jordan, but moved as a child to a predominately white suburb southwest of Philadelphia. Growing up with a sense of otherness led him to embrace his Palestinian heritage, a connection he maintains to this day by traveling to Palestine regularly.

Zahr’s father was forced to flee Jaffa with his family after the 1948 war that led to the founding of the Israeli state. His mother is from Nazareth, and the two met in the United States. The former is Christian, the latter Muslim. Amer calls this “the haram combination” — the Arabic word refers to something that is forbidden, a vice.

“People ask me, ‘where are you from, from …’ That’s what white people say when they want to find out where you’re really from.”

“‘From, from?’” Zahr responds caustically. “I’m from Palestine.”

Zahr started out like most comedians, driving long distances to play small rooms for little or no money. His first jokes were about easily relatable subjects like immigrant parents, but his tone quickly became more political. The Second Intifada erupted while Zahr was a student at the University of Michigan; the campus Hillel responded by bringing in Israeli army brass to give talks to hundreds of students. Zahr and a group of counter-protesters, meanwhile, would show up, ask tough questions and consistently get booed.

Zahr’s work traverses the uncomfortable political realities of living in Palestine, Islamophobia and the double standards applied to Arab-Americans by the media and law enforcement. When he wrote the joke about Muhammad al-Qiq, he asked himself, “Would it be funny if I told that joke to the hunger striker? Because it’s not funny otherwise.”

We don’t have al-Qiq’s opinion, but the audience in Carnegie’s nearly sold-out Zankel Hall thought the joke was hilarious. And the Arab-American community came out to support. There were Palestinians, Lebanese, Jordanians, Yemenis, Saudis and Egyptians. Even Oday Aboushi, one of the first Palestinians to play in the NFL, was there.

But getting to the most prominent stage in America wasn’t without its difficulties. As producer, Amer collected funds via a Kickstarter campaign and financed the remainder with personal money. Even so, he told me that in the days leading up to the show there were “people calling up Carnegie Hall saying, ‘Why are you letting these people perform [here]?’”

Oppression did not make Zahr and fellow Palestinian-American comedians Mona Aburmishan, Said Durrah and Mike Easmeil, with whom he shared the Carnegie stage, funny. Rather, they continue to be funny in spite of it. Their show, “Being Palestinian Makes Me Smile,” which expands on themes covered in Zahr’s 2014 book of the same name, is the embodiment of this resilience.

And the comedians fearlessly worked the politics into their acts. Zahr joked about the “VIP room” in Tel Aviv’s Ben Gurion airport, familiar to many Palestinians who have been stopped and interrogated there. Durrah warned the audience that Palestinians get nervous when Egyptians are sitting by the exits — a reference to Egypt’s nearly decade-long upholding of the Israeli blockade of the Gaza Strip. 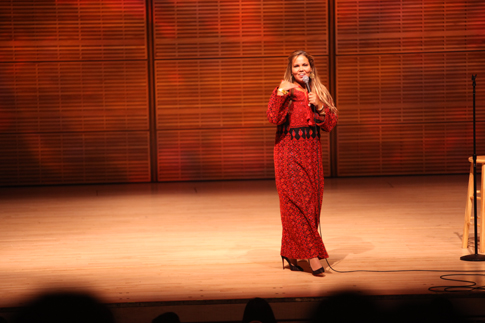 MAKING HISTORY: Mona Aburmishan also got the crowd laughing at Carnegie Hall on Feb. 5. Aburmishan, Zahr and two others who took the stage that night became the first Palestinian-American comedians to perform at the historic venue. Photo: Houssam Mchaiemch

She then slipped into her Valley Girl character: “Oh my god, how did your mom and dad meet? Did your dad take your mom hostage?”

During our café chat on February 4, she was more serious, reflecting on the political and social power of such jokes. “Why is standup comedy a threat?” Aburmishan asked. “Because it’s one person, a microphone and their thoughts, in front of a mass. That’s a sign of tyranny in some countries.”