This is an Uprising
How Nonviolent Revolt is Shaping the Twenty-First Century
By Mark Engler and Paul Engler
Nation Books, 2016

There are few highs like the moment when anything feels possible. Social movements and their participants tend to chase this moment of exultation, seeking to recreate the experience. Tactics get confused with strategy, and repeated. After the shutdown of the World Trade Organization meetings in Seattle came years of unsuccessful attempts to shut down other global economic summits. And after the occupation of Zucotti Park were the attempts to occupy other public spaces, each faltering in turn with the onset of cold weather and police repression.

With This Is an Uprising, Mark and Paul Engler attempt to put together a field guide for “momentum-driven organizing.” Those engaged in the slow, patient work of community organizing and building coalitions over bread-and-butter issues have long looked to the Alinskyite tradition for guidance. But, to my knowledge, this is the first organizing guide that lays out strategies for how to build on moments of what the authors dub “the whirlwind,” rather than simply waiting for lightning to strike.

The major contribution of This Is an Uprising is the Englers’ insistence that organizing matters — and we can learn from our forebears. Drawing on the work of Gene Sharp and a smattering of academics such as Frances Fox Piven to frame their analysis, the Englers look at uprisings from Otpor! (“Resistance!”) in Serbia and civil rights organizing in the South to the civil disobedience campaign against British rule in India to describe the habits of highly effective social movements.

While the notion that organizing matters may seem elementary, it runs contrary to the lifestyle radicalism and subcultural posturing that sometimes passes for politics on the left. There’s nothing wrong with personal expression, but confusing it with political action is effectively surrendering to the forces of the status quo. The great, interconnected problems of our age — from racial justice and economic inequality to climate change — require a collective response, not just individual actions as (non-)consumers. This means organizing, thinking strategically and exercising the power of civil disobedience. Unlike me, however, the Englers make this point not with a tendentious lecture but with historical examples. 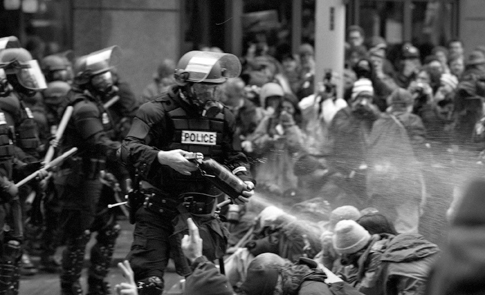 HOLDING TH​EIR GROUND: Thousands of anti-corporate protesters peacefully surrounded and shut down a World Trade Organization summit meeting in downtown Seattle on Nov. 30, 1999. They succeeded despite a barrage of pepper spray and tear gas from overwhelmed police. Photo: Steve Kaiser

Nonetheless, despite arriving on a wave of lavish praise from left luminaries, This Is an Uprising is ultimately unlikely to take a place next to Saul Alinsky’s Rules for Radicals as an activist classic. Although compellingly readable and quite timely, it suffers from several key deficits.

The first issue is the lack of methodological rigor. Although the book is chock-full of case studies, the Englers deploy them as cherry-picked examples of the points they’re making about successful movements, rather than undertaking truly comparative analysis. Their superficial engagement with the academic field of “social-movement theory,” which represents 30 years of scholarly attempts to try to understand social movements, likely contributes to this issue. The absence of academic jargon is welcome, but it comes at a high cost.

A related issue is the short shrift the Englers give to structural factors in analyzing what makes social movements successful. It would be unfair to blame them for not having a grand unifying theory of why certain moments are much more propitious for social movements than others. No one completely understands this. While those on the left can learn to tend to the embers of social unrest and try to read which way the wind is blowing, they still can’t predict with certainty when the fire will catch. The problem is instead that the Englers’ focus on what successful movements do — i.e., strategy, messaging and mobilization — at times seems to erase larger questions of social structure from the picture.

This gap could have perhaps been remedied if the Englers had spent as much time studying social movement failures as successes — there are certainly more of them. Given that it is impossible to conduct laboratory experiments with social movements, studying failure is perhaps the best way to determine which elements are crucial to success. Yet only once, in discussing the civil rights organizing of Dr. King and his comrades, do the Englers even briefly contrast a successful campaign with an unsuccessful one to try to figure out what was different. The conclusions they draw from this contrast seem right, but are rather underwhelming: choose your enemies wisely — the more vicious they are, the better for publicity purposes; community organizing matters; be prepared to strategically escalate; and so on.

On the other hand, their contention that social movements are adept at snatching defeat from the jaws of victory is novel and compelling. They deftly argue that organizers can define the terms of their own victory — media coverage will mostly focus on whether they meet their self-proclaimed goals, so attracting 500,000 people to a “Million Man March” becomes a failure. And movements often fail to recognize victories when they achieve them. Anti-nuclear activists effectively put a stop to construction of new nuclear power plants, but they saw the failure to stop the use of nuclear power altogether as a demoralizing defeat. Nonetheless, while total regime change may be the ideal, changing the terms of the debate can be a victory, too.