Laura Poitras’ “Astro Noise” begins, as it must, with September 11, 2001. In her video installation O’Say Can You See (2001/2016), we see footage of onlookers gazing at Ground Zero in the weeks following the attacks. Many of them look horrified, but some seem awestruck, too. Projected onto the reverse side of the same screen is U.S. military footage, also made soon after the attacks, of detainees being interrogated in an Afghan prison. The men are hooded, shackled and also horrified. For anyone who lived through the Bush years, the message is clear enough: the grief, confusion and sadness of 9/11 led to even more grief, confusion and sadness, this time imposed, continuously and systematically, by the world’s foremost military power. An eerie, distorted version of the U.S. national anthem plays over the whole thing. 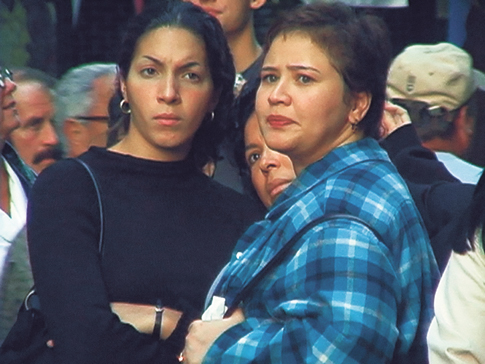 “Astro Noise” is an exhibition of almost entirely new artwork by Poitras, installed on the top floor of the Whitney’s gleaming new Meatpacking District building (admission fees are pricey, but it’s pay-what-you-wish on Friday evenings). Poitras is perhaps best known as the director of Citizenfour, the Academy Award-winning 2014 documentary on Edward Snowden and the United States’ sweeping, invasive 21st-century security infrastructure. This major-museum exhibition helps cement Poitras’ status among the preeminent chroniclers of America’s post-9/11 period, and joins the Oscar, Pulitzer and MacArthur “genius” grant on her remarkable and ever-expanding list of achievements.

As an artist, Poitras shows a clear affinity for her similarly minded contemporaries, like her Citizenfour collaborator Trevor Paglen, video/performance artists Jill Magid and Hito Steyerl (who each contribute to the exhibition’s catalogue) and the late filmmaker Harun Farocki. What sets her work apart is the attention paid to immediate, bodily experience. Indeed, it seems that her impetus to make new video installations (a form that she works in only sporadically — this is her first-ever solo exhibition) came from a desire to engage audiences directly in space and time: evoking and creating lived experience in ways that movies or texts just can’t.

Bed Down Location (2016), for example, has participants lying down on a communal mattress, staring up at a screen that mimics the night skies of various embattled zones: locations in Yemen, Somalia and Pakistan, where American drones have been used to carry out “targeted killings,” and Nevada, where many of these drones are piloted remotely. Off to the side, you can see barbed wire, or what look like prison towers. In this way, the viewer partakes in a shared somatic experience and feels some of the immediate humanity of the men and women, soldiers, prisoners and Mideast civilians who have defined so much of 21st-century American life, often from thousands of miles away. Back in O’Say Can You See, she asks viewers to identify simultaneously with ashen-faced American bystanders and with the shackled captives of American military aggression — and it is easy to identify with all of them, because their emotion is so visible and so direct on-screen. But by dividing the footage in space, Poitras also marks a clear separation: a line between where America builds its cities and where our military puts its prisons.

To some degree, “Astro Noise” feels like a step back in time, or even like an art show from an alternate history: a Bush-era exhibition that would have been immediately snuffed out in those years of “terror alerts” and anthrax envelopes. Most of the video footage is from no later than 2008, there’s little mention of Obama and Snowden doesn’t really come up. But this work isn’t about re-animating a moment in history; it’s more a matter of sifting through the bedrock of our current era. More than seven years into the Obama administration, the prison at Guantánamo Bay remains open and there are still American troops in Iraq and Afghanistan — by now, most college freshmen have never known a United States that wasn’t at war in the Middle East.

And, as the developing legal skirmish between Apple and the FBI helps illustrate, recent advances in communications technology have opened up all-new ways for Americans to relinquish personal privacy in the interests of vague, looming, anti-terrorist projects. Like the astonished onlookers in Poitras’ video — mouths agape as they stare at a site of terrible loss — America feels stuck in a loop, endlessly reliving the wake of past tragedies and tending to wounds that never heal.