"This is not just a strike against Verizon,” Communications Workers of America (CWA) President Chris Shelton told the more than 1,500 people who packed the block outside a Verizon Wireless store on Wall Street May 5. “This is a strike because this country’s lords and corporations have decided they want to get rid of unions. It’s about every person with a union card. It’s about every person who works for a living.”

The strike began April 13, when 39,000 workers from Massachusetts to Virginia walked out, virtually all of them in Verizon’s landline division. It came eight months after the company’s contracts with the CWA and the International Brotherhood of Electrical Workers, the two unions representing those workers, expired.

“The issue really isn’t the money,” CWA official Bob Master told LaborPress in April. Verizon has offered workers raises averaging 2.5 percent a year for three years. But the company’s April 28 “last, best, and final” contract offer would increase workers’ health-care payments by about 20 percent, end family leave for new hires, and cut off pension accruals for workers who spend more than 30 years on the job. Most important, it says it will only guarantee job security if the unions accept “workforce flexibility changes.” Those changes include increased ability to hire outside contractors for tasks like maintaining and repairing telephone poles and cable, to ship call-center work to low-wage lands like India and the Philippines and to transfer workers so they have to commute as much as 80 miles each way.

Verizon workers and union officials see this strike as a crucial moment for American organized labor. This is not a case of a beleaguered industry asking for concessions to avert massive layoffs, like the Big Three auto companies at the beginning of the recession, or more recently, the steel industry swamped by cut-rate Chinese competition. This is a highly profitable company—it made $18 billion in profits last year, and paid $13 billion to shareholders—trying to smack its unions down.

“This is one of the last big fights. We have to stay strong,” Al Medina, a 43-year-old power technician from Brooklyn, said at the May 5 rally. “You know how unions are these days. A lot of people are looking at us to see what we do.”

So what are the Verizon unions doing to win beyond the traditional strategy of “one day longer, one day stronger”? Verizon says its landline division brings in 29 percent of the company’s revenue, but only 7 percent of its profits. Its wireless division is much more profitable and virtually all nonunion. Provoking a strike in the landline division might be a logical strategy. If the company wins, it gets major concessions that will erode the union. If it suffers a prolonged strike, the business it will lose will be from an area it doesn’t care about. Verizon has long neglected its copper-line service, and in 2014, it failed to make the deadline for installing the cables to make FiOS fiber-optic service available to every household in New York City.

However, Verizon can’t just abandon its landline business, responds Master. It is legally regulated as a phone company, and thus under a binding obligation to provide phone service as a “carrier of last resort.” It also may not want to, he says. FiOS provides top-speed Internet service, and the day before the strike began, Verizon announced plans to start building a FiOS network in Boston.

The unions are relying on appealing to the general public, support from other unions and the determination of members. In April, three New York City hotels kicked out strikebreakers after Hotel Trades Council members wouldn’t cross picket lines outside. (On May 9, a federal judge issued a temporary restraining order barring that picketing, after Verizon complained to the National Labor Relations Board that it was an illegal “secondary boycott” of a neutral party.) UPS drivers won’t cross picket lines to deliver to Verizon facilities, CWA head Shelton told the May 5 rally, and their union, the Teamsters, is giving strike pay to truckers laid off for refusing to cross a picket line.

They are also urging the public to boycott Verizon — “Don’t shop at Verizon Wireless, don’t get FiOS, nothing,” CWA Local 1101 President Keith Purce declared May 5—and launched picketing of Verizon Wireless stores around the nation. (Although fewer than 200 wireless technicians and retail workers are union, their existence means strikers can picket those stores without being accused of a secondary boycott.) New York’s building-trades unions are coordinating picketing at stores for continuous coverage, said an organizer.

“I think Verizon is seriously underestimating both our membership and the general public’s mood,” says CWA District 1 research economist Pete Sikora. He believes the public is supporting the strike because it “understands that there’s a crisis in America,” with the rich getting richer and the decline in middle-class jobs.

Outside the Verizon call center in Brooklyn, the picket line on a rainy day three weeks into the strike is much quieter than it was April 13, when more than 400 people loudly cheered presidential candidate Bernie Sanders as he proclaimed, “You’re telling corporate America that workers in this country are not going to continue to be pushed down and down and down.” The about 100 picketers occasionally blow whistles and airhorns, but most are hanging out and talking, many sitting in camp chairs.

That doesn’t mean they’re in a mood to give up. “I don’t like the way they paint us as just hungry for money,” says technician Phil Viera, a 49-year-old Trinidadian immigrant from Brooklyn. He remembers working 12 hours a day to restore phone service in Lower Manhattan after the 9/11 attacks. In 2011, he says, Verizon workers wound up making concessions on health care when they ended their strike after 15 days, just before Hurricane Irene hit. “That’s why we’re so hard about it now,” he says, calling the company’s demands that workers pay more “a bayonet under the ribs.”

Jené Harrison, 41, a facilities specialist from Queens, feels that Verizon was particularly disrespectful when it sent the April 28 contract offer directly to workers instead of going through the union, and spent $25 each to ship them overnight. “If you can spend a half-million dollars on FedEx packages,” she says, “you can give us a decent contract.” 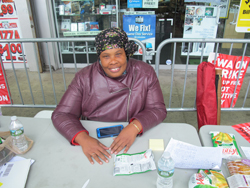 What’s most important about being on strike?

“The family unit. With Verizon wanting to be ‘flexible’ about sending the workforce 100 miles out, they forget a lot of us are taking care of our parents, are single fathers, single mothers. They’re destroying the family unit.”

What’s hardest about being on strike?

“I miss working. I love my job. I love interacting with the customers. I love troubleshooting. I love finding -solutions.” 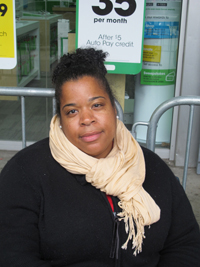 What’s most important about being on strike?

“The company is disrespectful to us as a workforce.”

What’s hardest about being on strike?

“Not having a paycheck.”

Verizon claims that the strike hasn’t affected its phone service. That hasn’t been my experience.

I came home after covering the opening day of the strike April 13, picked up the phone to call my editor, and couldn’t get a dial tone. I called the company and attempted to order repairs online several times. As a freelance journalist, I need my phone for work. Three times, I waited around my apartment all day for repair people who didn’t show up for their appointment. When they showed up on other days, they not only failed to fix my phone service, they somehow got calls to my number rerouted to a restaurant in my neighborhood.

My bill did arrive on time—dated April 13. Instead of enclosing a check, I enclosed a letter.

“I do not expect that my service will be restored until the strike is settled and Verizon’s legitimate professional and competent union technicians are back on the job,” it said. “You should not expect any payment from me as long as you fail to provide any phone service.”  — Steven Wishnia