“Fight, fight, fight! Housing is a human right!” chanted tenant organizers last night in front the Great Hall at Cooper Union in Manhattan. The Rent Guidelines Board (RGB) agreed to a second consecutive year of a rent freeze but refused to grant a rent rollback.

Over the past three months the RGB hosted five public hearings to determine the rent stabilized guidelines for New York City hotels, apartments and lofts. These hearings led up to last night’s annual RGB vote that ultimately determined to maintain last year’s historic decision. Again, rents for one-year leases will be frozen and rents for two-year leases will increase by 2%. Despite the advocacy of the two RGB tenant members, Harvey Epstein and Sheila Garcia, who spoke up for rent rollbacks, the board voted 7-2 to maintain last year’s decision.

While the past two year’s votes were appreciated by some, many tenants stress that this is not enough after over four decades of rent increases. Combined with widespread gentrification, the overpriced market-value rent and Mayor De Blasio’s housing (rezoning) plan, New York City is changing and its soul is at stake. Jill, a tenant advocate, challenged the RGB at one of the public hearings to contemplate the consequences of their vote: “I hope you don’t want to reside over the final destruction of New York as we know it because the neighborhoods are disappearing. The people are disappearing: the artists, writers and working people are disappearing. If New York wants to continue to be a city instead of a gated community for rich money launderers, then the RGB should start doing something in favor of tenants, who are the people that make the city what it is.”

During the public hearings hundreds of community members, many low income or senior citizens with fixed incomes, courageously shared their stories demanding a rent freeze or rent rollback. Testimonies of systematic landlord harassment were all too common: illegal deregulation, preferential rent loopholes, housing court coercion and perpetual, dangerous construction were just some of the tactics landlords use against tenants. Furthermore, despite the RGB’s data from 2014 stating that the median tenant pays 33% of their income on rent, a number of testimonies revealed that some pay over 50% of their income on rent. 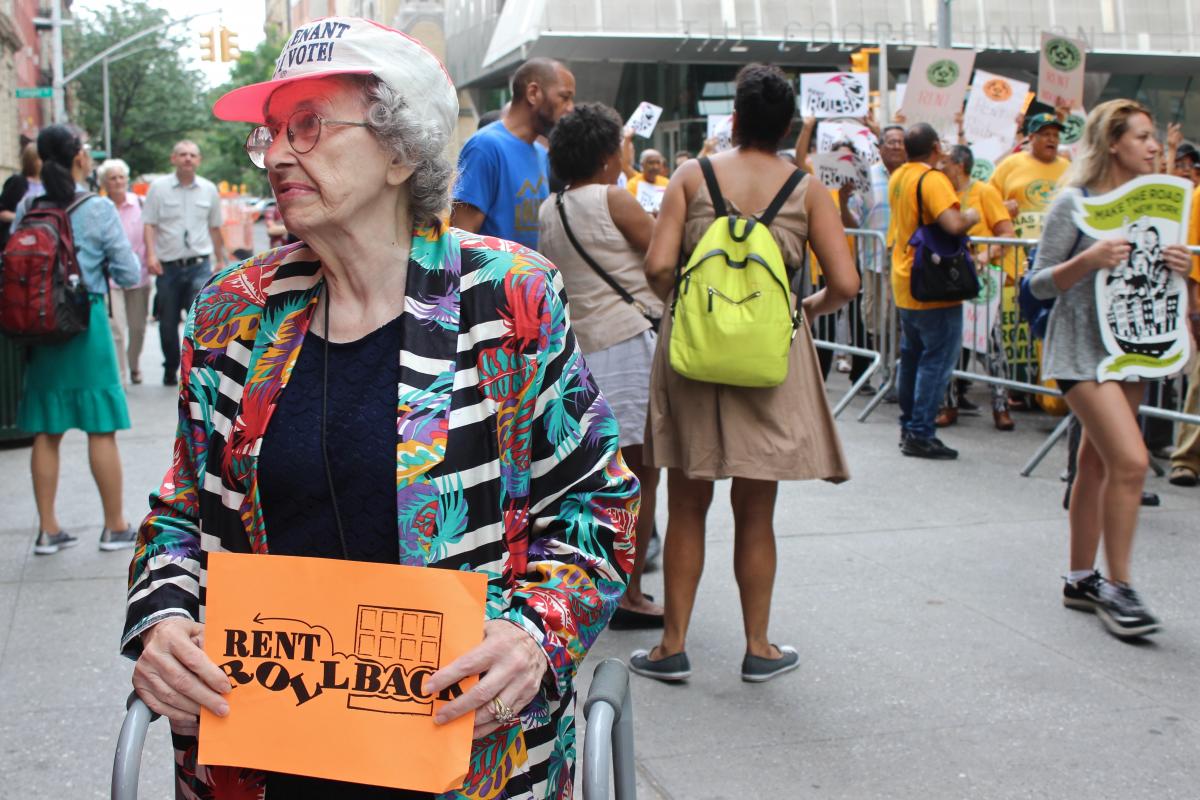 Suzanne Schropp, a tenant in the East Village, shared that this was her 14th year testifying in front of the RGB and that out of 20 units in her building, hers was the last remaining rent-regulated unit. Currently 80% of Schropp’s income goes towards rent and she has two jobs. In an exasperated voice she explained that organizing for tenant rights takes a toll and that people just do not realize the level of landlord harassment that is going on. A tenant in the crowd shouted in solidarity, “We know! The other tenants know!”

One senior citizen who has lived in a rent-stabilized unit in SoHo for the past 60 years was inspired to share her story impromptu at one of the public hearings. Her building was sold in the 1980s for $200,000. After a fire in 2010, the new landlord gave false promises to repair the building. Then a year later the landlord sold the building for $4.5 million to claim insurance. The new owners renovated the building and sold it again just last year for $18.5 million dollars. She explained that that the market rate for lofts in her building go for $10,000 a month. She demanded rent rollbacks and not just for the rent-stabilized tenants, but also for those that pay market value rent. The RGB only decides rent guidelines for the remaining one million rent-stabilized apartments, but there are concerns that market-value tenants are left without a voice or are not yet part of the dialogue. 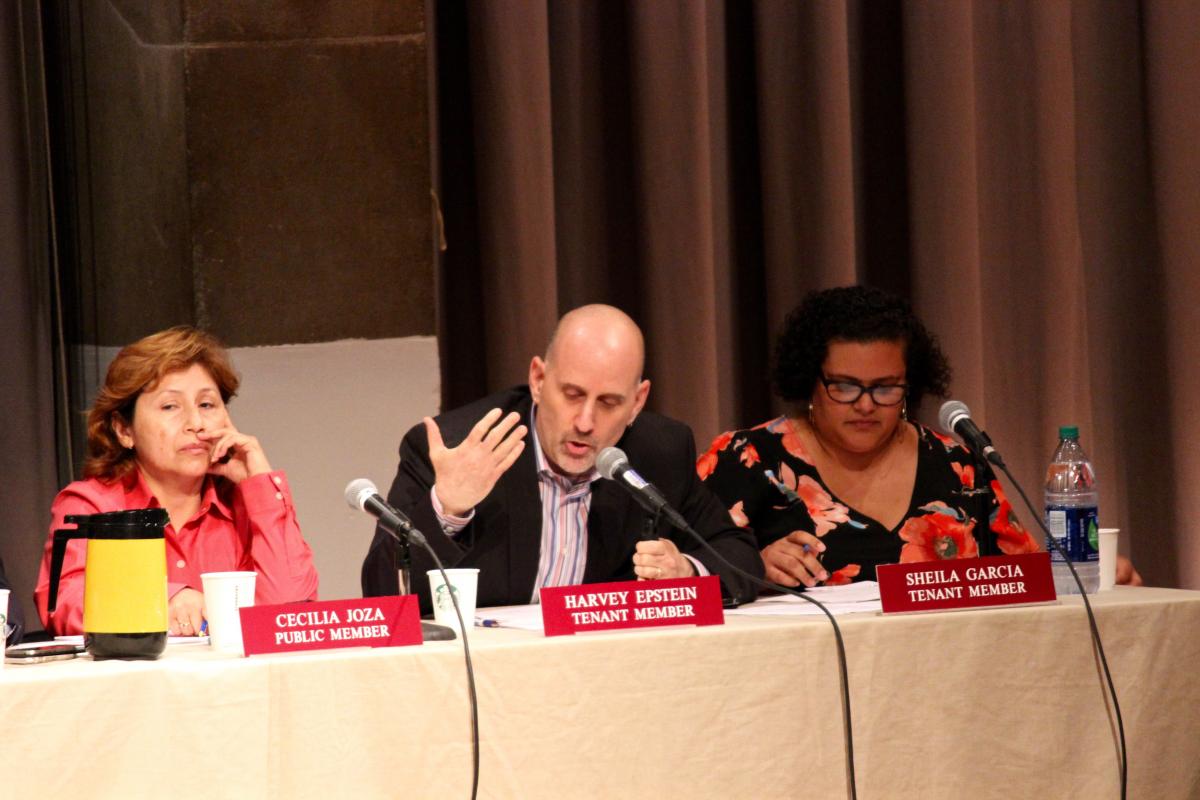 Tenant Member of the RGB, Harvey Epstein, addresses the RGB and community members at the vote on June   27th.

Few landlords attend the RGB meetings, and most that do are small business landlords. The Small Property Owners of New York (SPONY) were contacted, but did not follow up with The Indypendent to comment on this year’s RGB vote. RGB member, Epstein, highlighted that “not a single large landlord, which the majority of apartments are owned by large landlords, not a single one testified. No one who really benefits from large increases came to our hearings.”

Since the RGB’s founding in 1969, there have only been two historically low rent increases at 2% in 2012 and 1% in 2014. Last year the RGB voted for the first time on a rent freeze. The RGB has consistently voted for rent increases causing an epidemic of unaffordable housing. RGB tenant member, Epstein, shared at last night’s vote that, “over 20,000 New Yorkers were evicted last year. On average 43% of those evictions were from rent stabilized apartments. Today in New York, 57,000 people will be sleeping in a homeless shelter. Over 100,000 fellow New Yorkers will be going to a homeless shelter at some point this year.”

Apartment Lease Guidelines Over the Years Data from RGB:

Ana Rosario, a social worker, attended and testified at her first public hearing after her and her partner were pushed out of their Inwood apartment. As for many others, her personal experience motivated her to organize with other tenants in her building and with the Northern Manhattan Not for Sale coalition. Tenant and housing rights collectives organize community forums on tenant rights, informational sessions on rezoning and are crucial to the fight for affordable housing.

Rosario shares a prevalent concern among NYC tenants over Mayor De Blasio’s housing plan that focuses heavily on new developments. She explained how his plan is “going to bring in 20% of affordable units, but then it is going to displace everybody in the neighborhood as a result” of state-sponsored gentrification when the remaining majority of units will be designated for higher income tenants. Rosario emphasized, “housing is not enough. We need you to work with us, be at the table with us, allow us to pay lower rents and create housing for people that need it at a lower rate.”

“I’d be homeless in a heartbeat if the rent prices go up” shared 62-year old Manhattan resident Silva at one of the final hearings preceding last night’s vote. He shared how he was forced to take an early retirement and now lives on a disposable income of $200 a month for his expenses beyond rent. “I don’t envy you and your job,” Silva told the RGB but, “it strikes me that the system is broken and something radical must be done to fix it.”

Makes one wonder if last night’s decision was radical enough to remedy the housing crisis. For many, it was not.

Approximately 650 community members attended last night’s annual RGB vote. Once the vote was announced the audience shouted in unison, “2% is too much!” touching on the fact that half of rent-stabilized tenants are on 2-year leases. After several hours of chanting “rent rollback” and “¡Sí se puede!” (Yes, we can!), many tenants walked away from last night’s vote disheartened, but not too surprised.

A seasoned tenant activist of 11 years, Matthew Abuelo, stated that “while it was disappointing, it was all too predictable.” Moving forward he believes they must assess the movement and include consumer rights organizations and college students in their advocacy.

Althea Matthews, a Community Action for Safe Apartments (CASA) leader, shared how she has struggled with homelessness for the past few years. Although she currently has a room to stay, she stressed that without a rent rollback, she will not be able to afford a lease to her name. Matthews shared, “I believe between the landlord, the developer and the court equates gentrification. It’s not going to get better unless someone fights for the people of New York. We’re not afraid of change, but we don’t want to get pushed out of our homes.”

The Silver Lining: Power of the People

An East Village tenant of nearly 30 years and a leading organizer with the Good Old Lower East Side (GOLES), Jordy Trachtenberg, shared proudly that he lives on “the coolest street in the world”, St. Marks Place, but he also has to endure slumlord conditions. Over the past 15 months St. Marks Asset, Inc. has cut off the gas. The company was supposed to grant the tenants a 20% abatement, but they only received 8.77%. The building tenants also deal with 4-7 days a month without hot water or heat and there is no fire or C02 alarms. Yet Trachtenberg stated, “I try to always find the silver lining in bad situations. I got to know my neighbors and we’re unifying for the same cause. I feel better in my neighborhood walking down the street when I’m able to acknowledge people that I would’ve never known. We have a common thread now. I think that’s what the East Village is really about: The New York neighborly love.”

Organizers urge more New Yorkers to take a stand and unite for affordable housing. Monica Thompson, a social worker and Harlem resident for the past 10 years, attended her first RGB meeting this year. When asked what inspired her action, Monica shared that too many of her patients remain homeless while trying to navigate this inequitable housing system and she has also witnessed Harlem’s gentrification via 125th Street’s commercialization. She explained, “to understand the complexities of how people are being affected by low wages and poverty, you have to understand rent and people’s ability to maintain stable housing.” 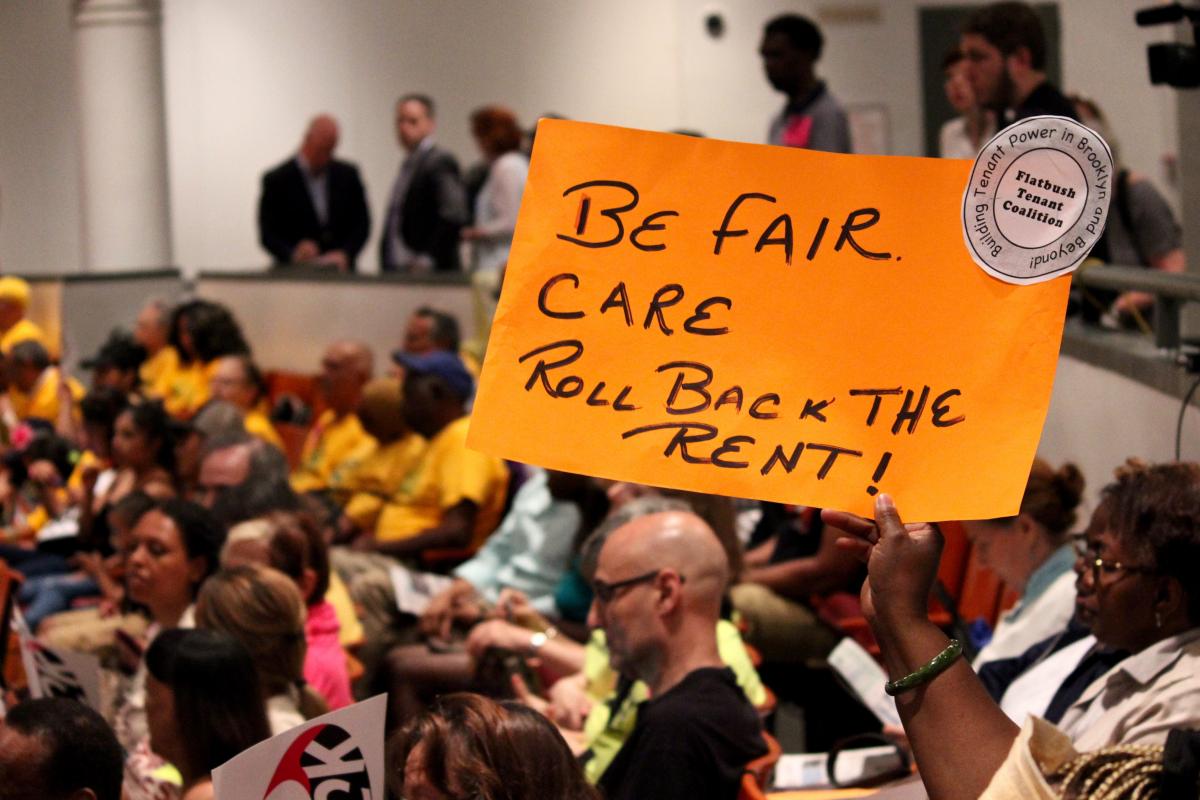 The predominate demand of tenants is to roll back the rents

After last night’s vote, NYC Council Member Ben Kallos stated that, “the Rent Guidelines Board has shown that last year's rent freeze was more than a symbolic gesture, and tenants have the power to be heard. We will continue to fight to make up for years of too-high rent increases.”

Sheila Garcia, a tenant member of the RGB, emphasized that this year’s tenants organizing was on an unprecedented level. With continued collective action and increased voices, perhaps next year will be the true historic year when housing is recognized as a human right and rents are finally rolled back.