Millions of people around the world have been in mourning since a gunman stormed an LGBT bar in Orlando, Florida early Sunday, murdering 49 people and injuring dozens more in the deadliest mass shooting in modern U.S. history.

On Monday evening thousands of New Yorkers gathered with signs, flowers and flags to continue showing their respect for the victims of the attack. The meeting point was 53 Christopher Street, outside the emblematic gay bar, The Stonewall Inn.

It was at Stonewall that the gay rights movement found its voice in June 1969 when six days of riots broke out in Greenwich Village following an NYPD raid on the venue. A year later Gay Pride celebrations were held on the first anniversary of the Stonewall riots. Similar late-June celebrations would take root in dozens of cities around the world in the coming years and continue to this day.

In this ocasion the crowd stood outside the bar chanting “We’re here and we’re queer!” Governor Andrew Cuomo and Mayor Bill de Blasio both spoke. People of all colors and aesthetics stood on the streets chanting, crying and talking, holding up signs in favor of the LGBTQ community, against the National Rifle Association and demanding equality and change. When it started getting dark people pulled out their phone and shone the light of their screens. Finally, in the small park in front of Stonewall, where a sculpture honoring the gay rights movements stands, a few people gathered around watching the last candles burn out that night.

The Indypendent was present at the vigil and spoke with some of the attendees. 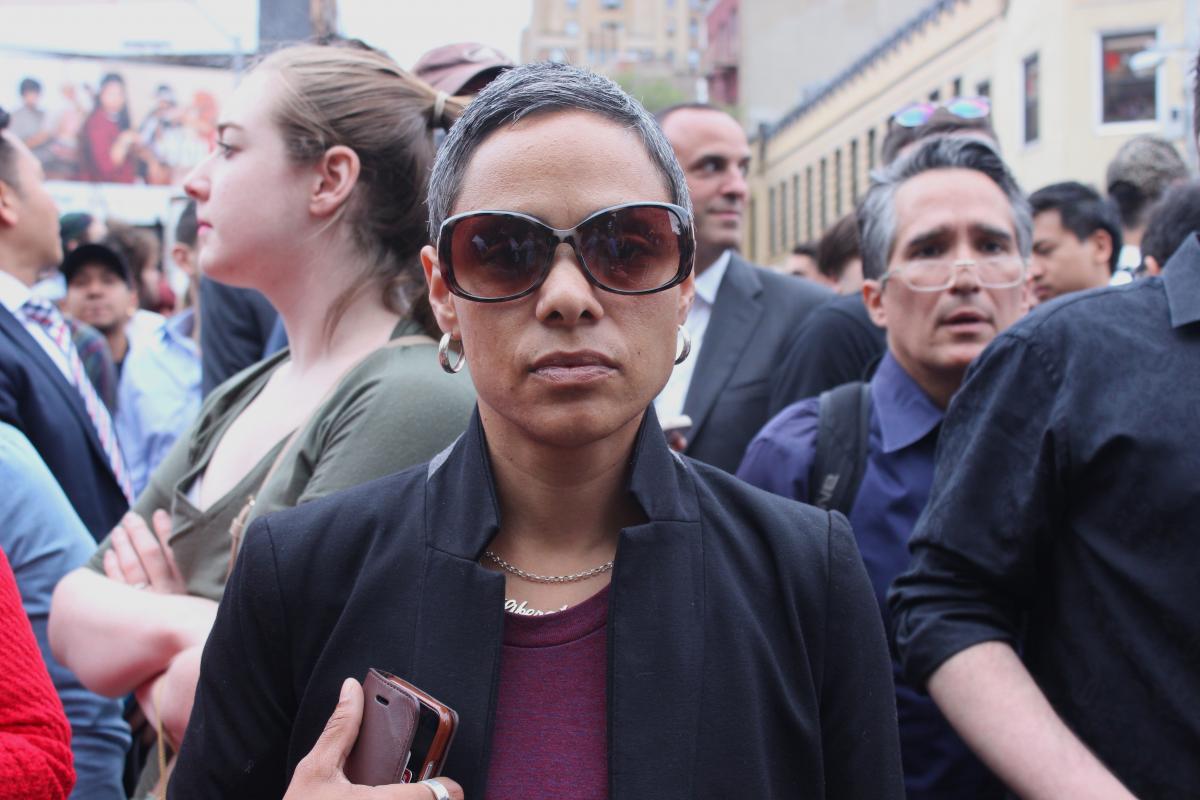 Why are you here tonight? I am here tonight because our community is under attack. I am here because the most vulnerable safe space that we have for so many, specially queer people of color, are the bars and that is where I grew up. I grew up in the bars, those are my people, dancing. It was the only safe space we had to be who we were, to claim each other without fear of being ostracized of violence. In the most sacred space that we have, our sanctuary, we were massacred. We need to organize around it. I'm here to show my support  and to be  with my people.

What's the message that you want to give out to the rest of the world? I want to say that we need to organize against Donald Trump. It  doesn't matter what the religion is, that is insignificant. That is an ideology that is everywhere, that's against LGBT people and we need to pass policy, gun control. We need to pass gun control policies so that nobody, not little kids, not LGBT people, nobody is massacred. 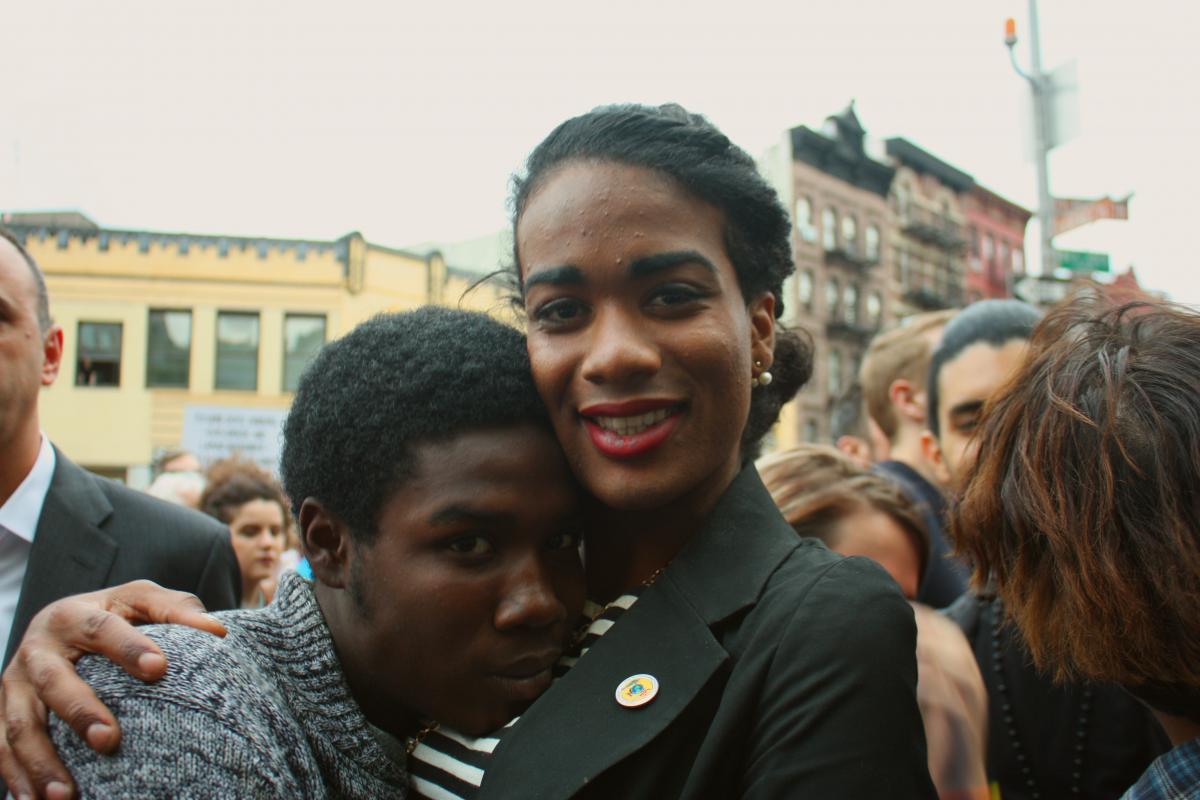 Why are you here tonight? This is just supporting our community and kind of getting the voice out there that we matter, that we are equal. That we are no different, that we are just human beings and that we are not being afraid to be ourselves. We are not going to give up because we deserve equal rights. And when we come together this is what happens, the voice gets out there and people come out and support because we come together as a community, as a nation, as worldwide. 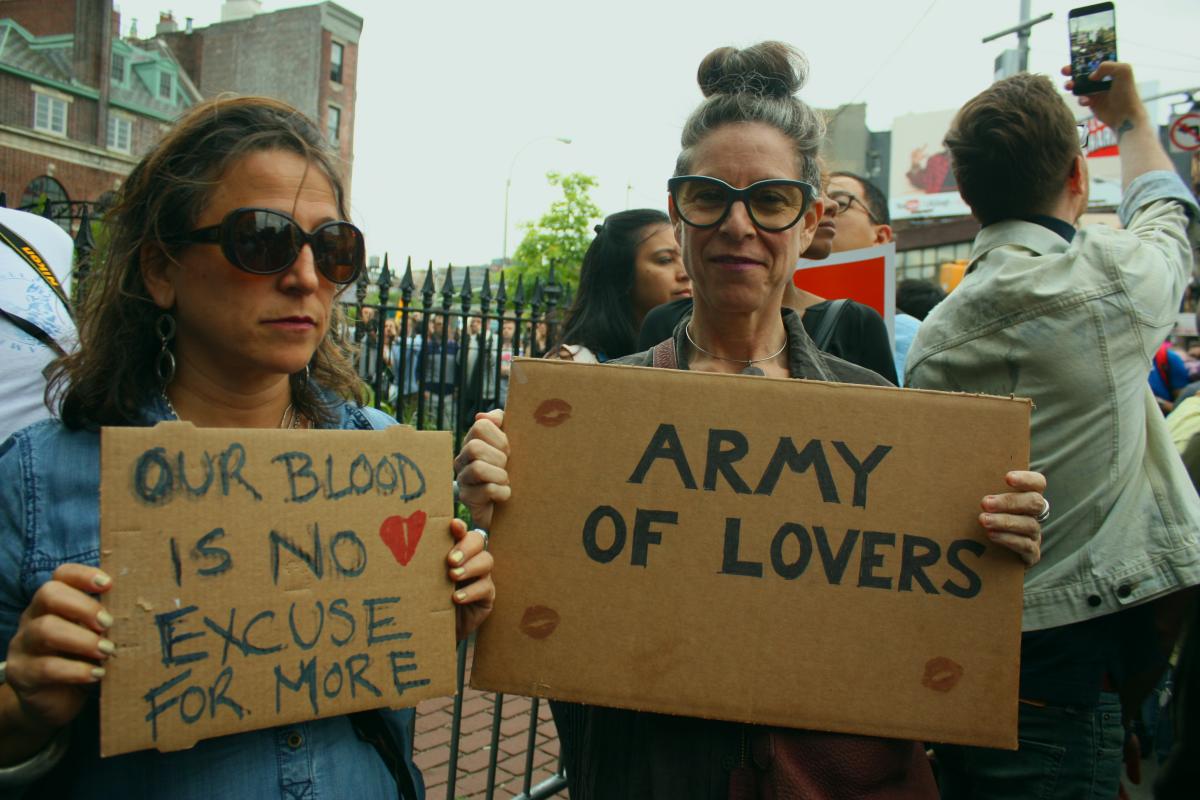 Dana, 49 years old and Rachel, 52 years old
What's the message that you want to give out to the rest of the world? Dana: Everyday, every minute, all day long, people of color, marginalized people are being treated with hostile aggression and violence. It's unacceptable and we must resist this fight and go to the roots and origins of this violence. But for myself, I'm really committed to not rising to the stimulation of these singular events and I try to walk with a consciousness that there is violence in the rhythm and the pulse of the nation and the globe and I walk with that. Rachel: I feel like we used to have more organization within the queer community to articulate these things. Like before when I couldn't hear I said, 'human mic' and I realized, oh this is not necessarily Occupy, people might not know what Occupy Wall Street is even. And there is all this language that we are missing in the gay community because we followed the way of acceptance and marriage and all this normativity and so all the radical politics and the language of politics, even thinking about resistance, in a way, we are at a loss right now. I don't think it has to stay this way, I think that it is time for us to have self-education, political selves and to start meeting again politically. I think we are deaf and mute right now to our own political necessity.

When you found out about what had happened, where were you and how did it make you feel? Rachel: I did miss..I was in Act Up in the 90's, and I miss that people used to call each other and talk to each other. So we got together and had a ritual in the evening with friends and a lot of it was talking through all these issues and I really felt like knowledge formation around what we can do, what we can't do, how we think about things really happening. Face-to-face, around the table, hearing the voices and in some ways I feel like all this speed, technology, doesn't do the service that we think. We are organizing by connecting on Facebook but we're really just blasting, blasting. 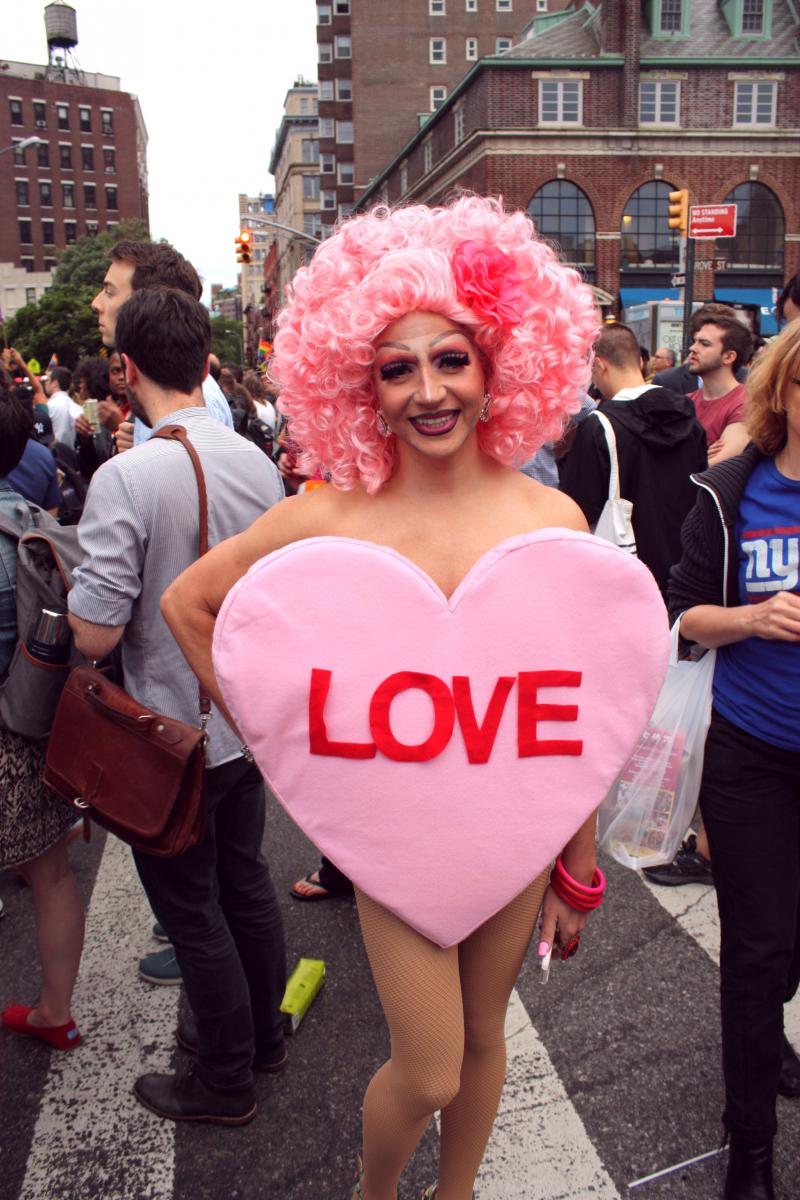 What's the message that you want to give out to the rest of the world? I will not go back into any closet. I will not be someone I am not just because they feel that they can scare us. I am going to be myself, be out, be proud. Here we are outside of the Stonewall where 46, 47 years ago people weren't even allowed to dress like this. There were laws that banned people from dressing like the opposite gender or loving who they loved or marrying who they wanted to marry and we have come so far in this country, we are not going to let an act of terror like this silence us or stop us.

How did you find out? I got in bed and, like all us nowadays, we pick up our phones. I go on to Facebook and the first thing I saw was 'My prayers go out to Orlando'. I didn't know what that meant but as I scrolled I saw more and more and more and of course the terror of it and the sadness of it hit. Yesterday I was mostly angry and today I am mostly sad hearing the names and seeing the stories of people.

What angered you the most? I was mostly angry about the coverage that I was seeing as I was watching the mainstream media barely mention that this was a gay club that this took place at. And I was, of course, angry at the ridiculous gun laws that we have in our country that allow anyone to own anything that can kill so many people so quickly. 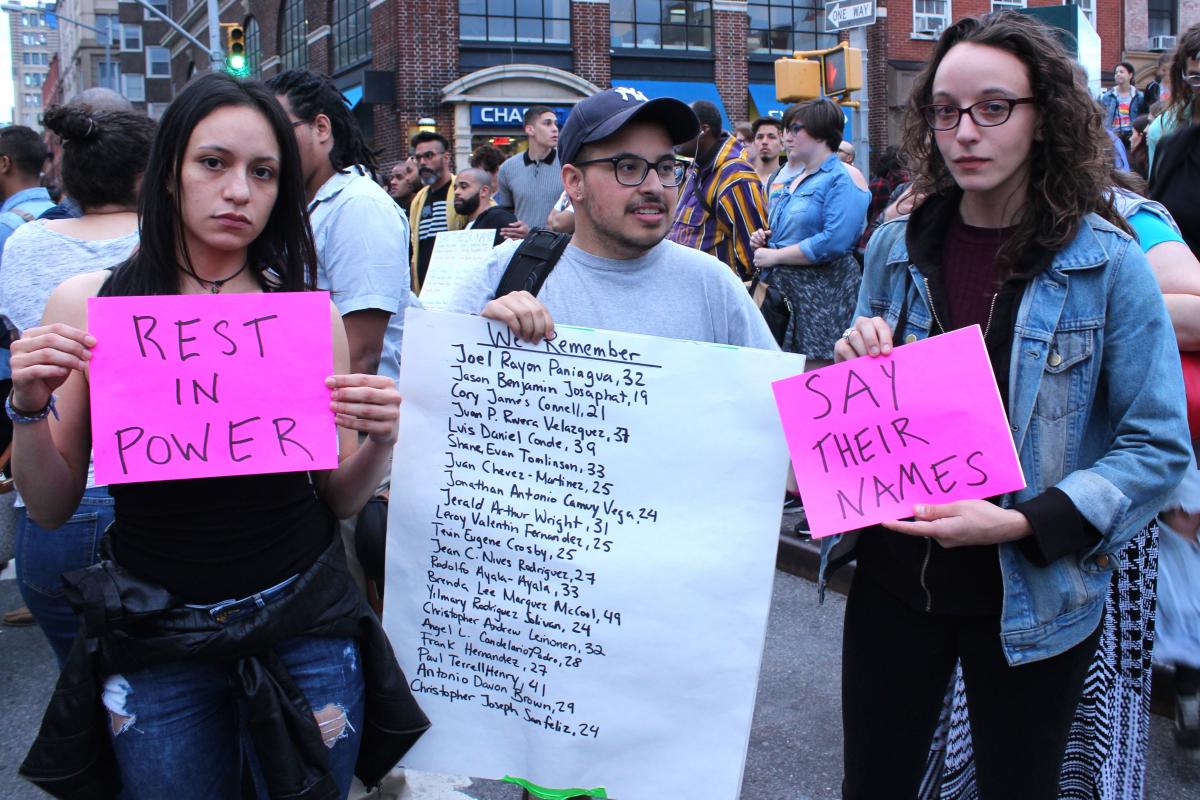 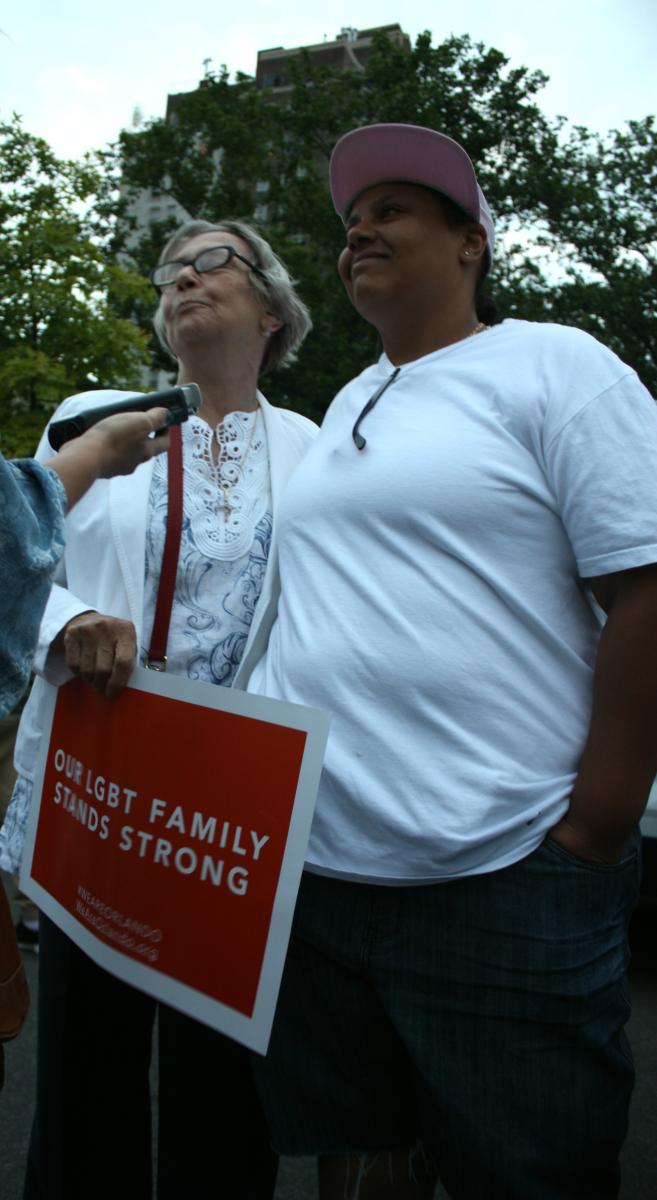 Why are you here tonight? To support the mothers and everyone affected. This is my daughter and she is gay and when I saw those mothers on TV, that could be anyone of us, so it went right to my heart.

How did you feel when you found out about what had happened? Devastated, kind of like a nightmare, this is not happening again.

Why do you think this attack happened? Hatred, it’s just hatred, hateful people. The man who did it was a wife beater, he abused his wife, he was mentally disturbed, he didn’t get the proper mental health that he needed. He had the clearance to buy the guns.

What message would you give to the families of the victims? Oh God bless them and I give them all my support and my love. Daughter: Love is love no matter your religion, your skin color, your sexual orientation, close your eyes and feel the love. 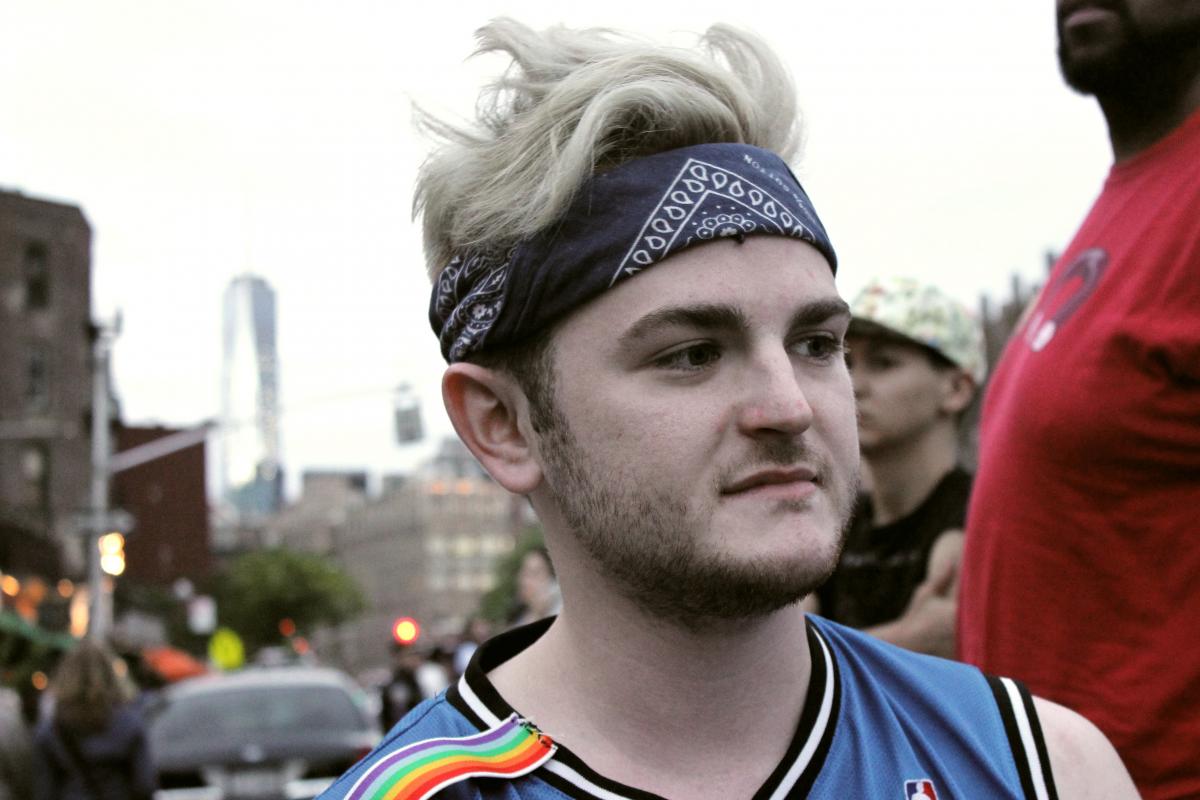 Why are you here tonight? I came here today to bear witness. There is not much you can do in these moments of process, except be with other people. Part of the reason I came here today is to look at some people in the eyes and say I love you. And this is what I can do at this point today because it's so overwhelming and we need to do these things to pressure our politicians, but each and every one of us needs to reach out to one another and look that person in the eye and say I respect your humanity and that's all.