The Left was at the height of its influence in the United States during the 1930s and 40s. It was an era that saw the rise of the New Deal, massive public works programs, millions of workers joining industrial unions for the first time and a wartime alliance with the Soviet Union to crush Nazi Germany. In the halls of Congress, no voice from the Left rang out more loudly during that era than that of Vito Marcantonio. An unrivaled leader in the struggle for racial equality and a staunch supporter of Puerto Rican independence, Marcantonio served seven terms in Congress between 1934 and 1950, representing the Italian, Puerto Rican and African American residents of East Harlem where he was born to a poor immigrant family.

Marcantonio is little remembered these days. The onset of the postwar Red Scare would lead to his defeat in 1950. Four years later he would be dead. Worse yet, the McCarthy Era would see the widespread dismantling of working class movements that were the bedrock of Marcantonio’s brand of leftist politics.

Dedicated to rescuing their hero and his political vision from obscurity, about 50 people gathered Sunday on a sidewalk outside City Hall Park for a ceremony organized by the Vito Marcantonio Forum. The location across from the Woolworth Building marked the spot where Marcantonio dropped dead of a heart attack on August 9, 1954. In reclaiming the memory of the man, they hoped to also reclaim a vision of the Left as a force for sweeping social change deeply rooted in the lives of working people.

Manhattan Borough President Gale Brewer speaks to members of the Vito Marcantonio Forum on Sunday afternoon on a sidewalk outside City Hall where Marcantonio died of a heart attack on August 9, 1954. City Council Speaker Melissa Mark-Viverito also appeared at the event. 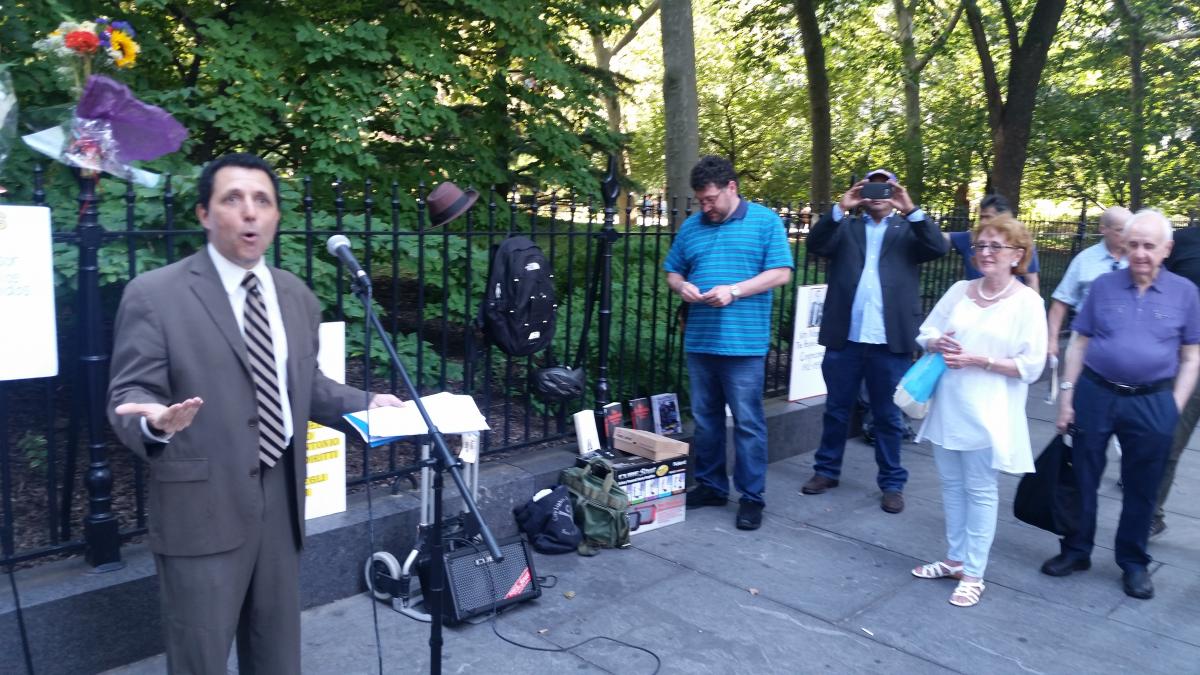 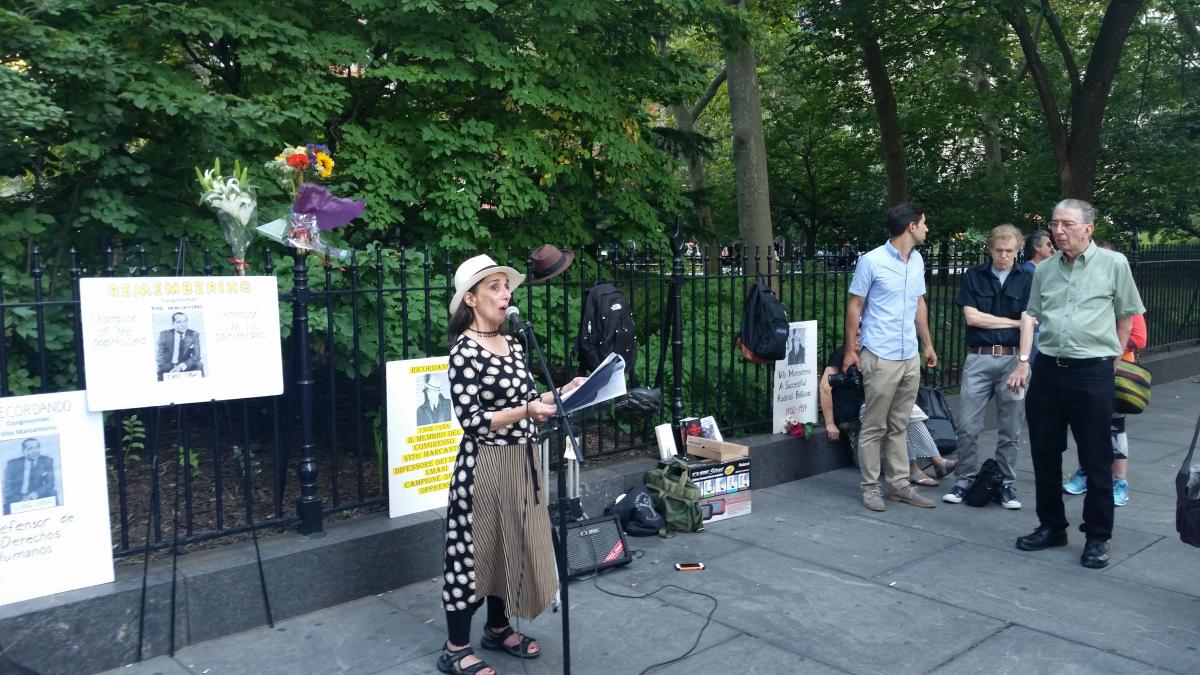 LuLu LoLo Pascale of the Vito Marcantonio Forum reads from an account of a journalist who covered Marcantonio during his time in Congress. 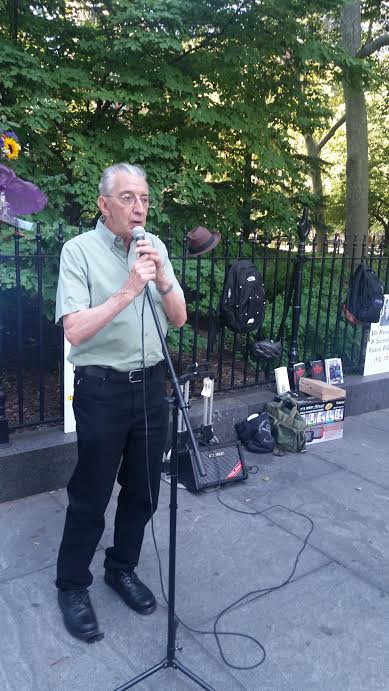 Gerald Meyer, Co-Chairman of the VMF and author of the definitive biography of Vito Marcantonio, describes his subject’s rise from an impoverished childhood in East Harlem to the halls of Congress where he served for seven terms between 1934-1950. 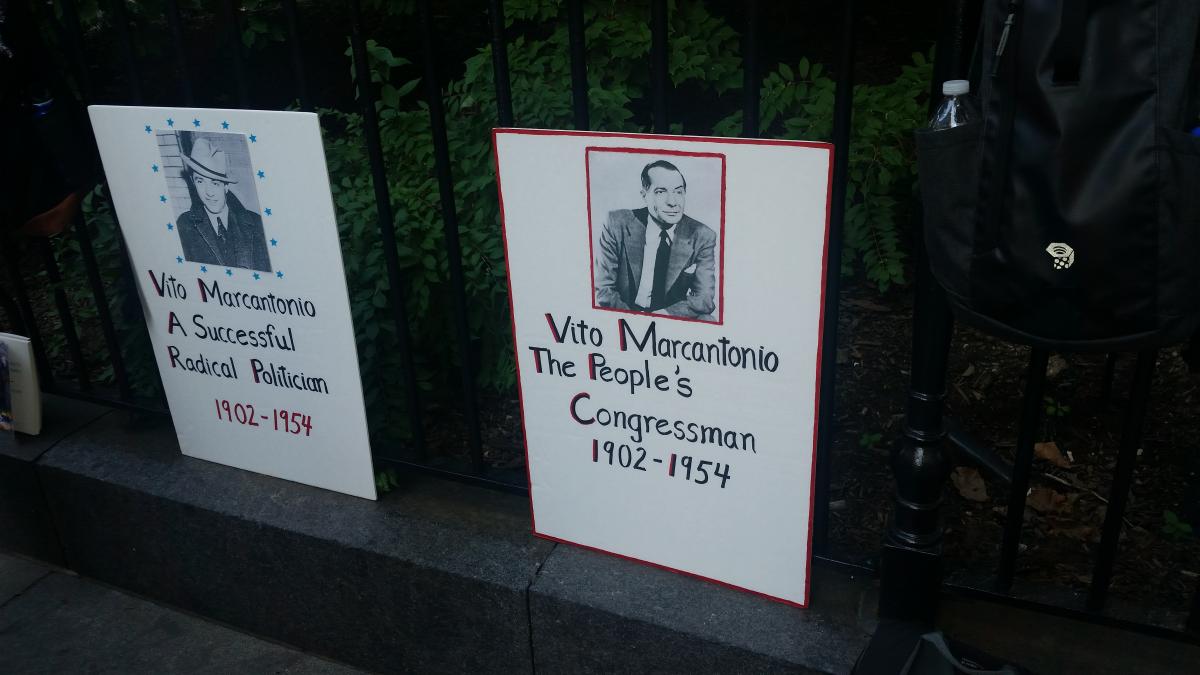