The Democratic Party struggled mightily to carry out its carefully scripted coronation of Hillary Clinton during its July 25-28 national convention in Philadelphia. Whenever Clinton’s name was mentioned on the first night of the convention, boos cascaded down from all sides of the sports arena where the convention delegates had gathered. On the second day, hundreds of Bernie Sanders delegates stormed out. Later former CIA Director Leon Panetta’s speech to the convention was disrupted by chants of “No More War!”

Outside the convention center and the eye of much of the media, numerous protests and cultural events took place every day.

Legions of young Bernie Sanders supporters who had traveled from across the country were on hand. Even as the Sanders campaign wound down, there was a widespread recognition that sustained engagement both inside and outside of conventional politics will be necessary for years to come in the face of a system that is running on auto-pilot to create more poverty, inequality, war and climate chaos.

“Nothing changes for us,” said Cathy White  a Sanders supporter from Los Angeles. “We still have to fight all these little battles to win the war.”

The social movements that have energized the U.S. left in recent years – Black Lives Matter, immigrant rights, climate justice, anti-fracking and anti-TPP among others – also made their presence felt. We will be hearing more from them no matter who moves into the White House next January.

“Now that we’re awake,” actress Susan Sarandon said summing up the feeling of many at a rally the day before the convention started, “We’re going to stay awake.”

All photos by Antrim Caskey. 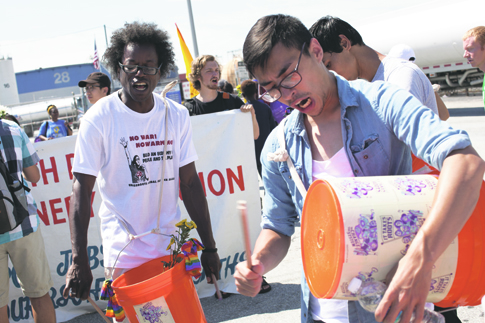 IT TAKES ROOTS TO CHANGE THE SYSTEM: Participants in a tour of toxic sites led by two local Philadelphia groups rally in front of the largest oil refinery on the East Coast, one that local Democrats hope to expand in the coming years. 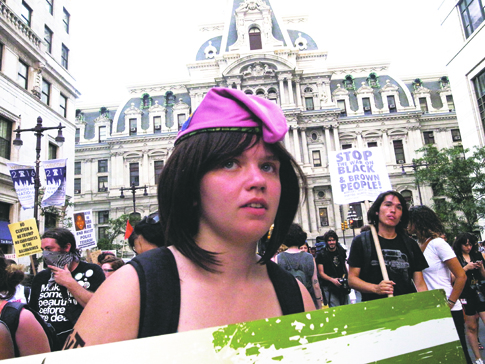 MARCHING FOR BLACK LIVES: Participants in a Black Lives Matter March meet up with a Bernie or Bust contingent at Philadelphia’s City Hall before heading on to FDR Park next to the arena where the Democratic National Convention was held. 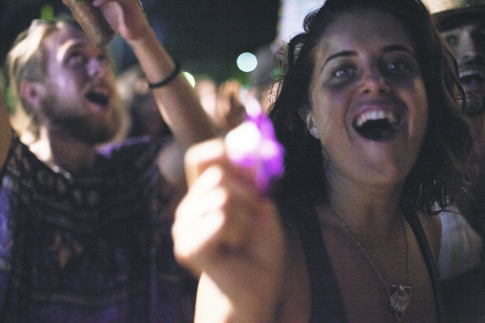 FOR THE EARTH: Hundreds of people rallied for action on climate change in a public park on the day before the DNC began. As night fell, they sang and danced and then settled in to watch Josh Fox’s new film How To Let Go of the World – And Love All the Things Climate Can’t Change. 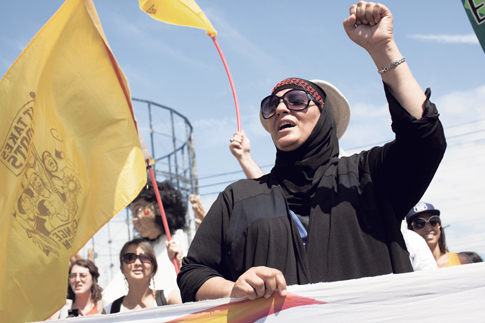 AMERICANS TOO: Immigrant rights marchers took the streets on the first day of the DNC. 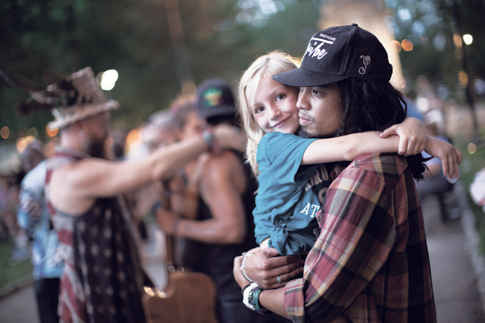 ACROSS GENERATIONS: The fight for a better world doesn’t end with one election.