The career of the typical National Football League player is short. Football is a violent game that takes a brutal toll on the bodies of those who play it, particularly at the professional level.

Even before the start of this year’s season, Colin Kaepernick appeared to be reaching the end of his tenure as the Forty-Niner’s quarterback. Halfway through the previous season, Kaepernick — who as a rookie in 2012 helped lead the Niners to their first Super Bowl in 18 years — was bumped from his starting position. As this year’s preseason began there was chatter that he’d be bumped entirely from the team's roster. Recent surgeries to Kaepernick’s left (non-throwing shoulder), hand and knee had not helped his dwindling performance on the field.

But last Friday, ahead of an exhibition match against the Green Bay Packers, Kaepernick did something that might just outlive the memory of his gridiron glory and failures. It was a modest act and something he in fact did in two previous exhibition games this year before anybody noticed. It was more what he didn’t do, really. Not until a reporter asked Kaepernick why he wasn’t standing during the traditional pregame rendition of the national anthem did a shitstorm — red, white, blue, star spangled and about as American as the game of football itself — begin to descend on the quarterback.

“I am not going to stand up to show pride in a flag for a country that oppresses black people and people of color,” Kaepernick told NFL Media on Saturday, referencing the string of high-profile police killings of African Americans in recent years and the rise of the Black Lives Matter movement, which he said he had been following closely in past months. “To me, this is bigger than football and it would be selfish on my part to look the other way. There are bodies in the street and people getting paid leave and getting away with murder.”

Niner’s coach, Chip Kelly, responded by explaining to reporters that refusing to stand for the anthem is Kaepernick’s “right as a citizen" and "it's not my right to tell him not to do something."

The NFL, in a statement, said its players “are encouraged but not required to stand during the playing of the national anthem.”

Others in the league reacted to Kaepernick’s act of defiance by highlighting their admiration for America’s armed forces.

“You've got to look at the gifts that we have, the opportunity that we have to play a great game is through the men and women that serve our country," Buffalo Bill’s coach Rex Ryan said. "And I think that's an opportunity right there just to show respect.”

For New York Giants wide receiver Victor Cruz there didn’t seem to be any question whatsoever over whether to obey the custom: "The flag is the flag. Regardless of how you feel about things that are going on in America today, and the things that are going on across the world with gun violence and things of that nature, you've got to respect the flag, and you've got to stand up with your teammates.”

The controversy has spread well beyond the NFL. Radio host and Fox News talking head Larry Elder tweeted on Monday:

Founding Fathers fought for liberty.
MLK fought for civil rights.
Kaepernick fights for the right to lie about cops. pic.twitter.com/0lg4qjghYx

Elder’s tweet is interesting. He is echoing the message, bouncing around right-wing echo chambers, that as a professional football player Kaepernick is spoiled and privileged, and ought to honor America’s founding fathers by keeping his clap-trap shut about police violence. But, uniquely, he seems to imply this is what Martin Luther King would do.

Donald Trump, the walking shitstorm himself, weighed in.

“I think it’s a terrible thing,” the Republican presidential nominee and billionaire said of Kaepernick’s refusal to stand. “You know, maybe he should find a country that works better for him. Let him try. It won’t happen.”

Kaepernick has his defenders as well.

A petition thanking the quarterback for taking a racial justice stance posted to RootsAction.org has garnered over 11,000 signatures at the time of this writing. Army veteran Rory Fanning, who served in the same unit as Pat Tillman posted a photo of himself at a Chicago Cubs game Monday night holding a sign reading “Vets sitting with Colin.” He elaborated his position via facebook:

—The US has history's largest prison population

—US police kill its citizens at unprecedented rates, with African Americans being disproportionately targeted

—The US government surveils every phone call and email

—The US government would rather make Wall Street crooks happy than its teachers.

Personally, I don't know how anyone can say the words, "Land of the free" with their hand over their heart and keep a straight face. Colin Kaepernick is choosing not to lie to himself or the world by pretending he believes this country gives a fuck about personal liberty, particularly for those who aren't white or rich. 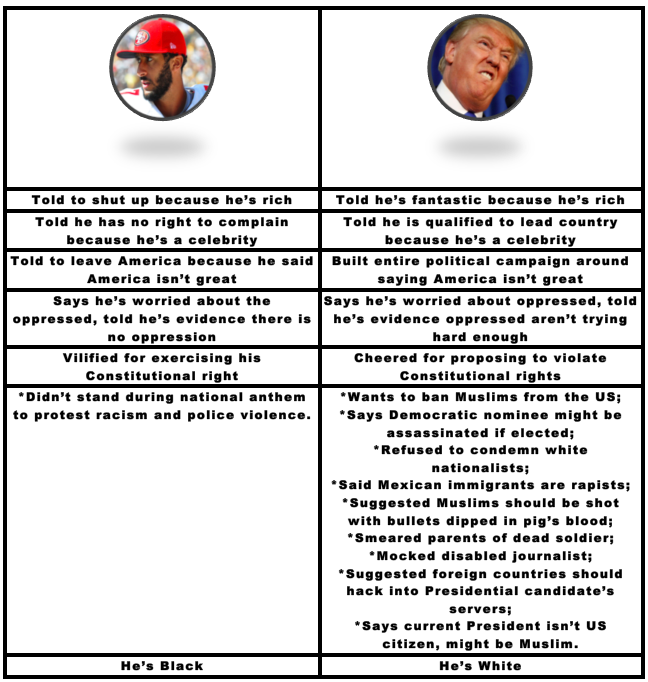 But it's worth noting that Kaepernick has raised criticism of presidential candidates from both leading parties.

“You have Hillary [Clinton] who’s called black teens or black kids super-predators,” Kaepernick told reporters after Niner’s practice on Sunday. “You have Donald Trump who’s openly racist. I mean, we have a presidential candidate who’s deleted emails and done things illegally and is a presidential candidate. That doesn’t make sense to me, because if that was any other person, you’d be in prison. So what is this country really standing for?”

Also on Sunday, Kaepernick, responded to criticism that refusing to rise for the anthem is disrespectful to members of the armed services.

Meanwhile, writing at the Intercept Jon Schwarz explains why Kaepernick’s protest is “righter than you know.” Tracing the historical roots of the national anthem, Shwartz observes, that the third and mostly overlooked verse, written by lawyer and poet Francis Scott Key “is not just a musical atrocity, it’s an intellectual and moral one, too.”

Here are the lyrics you don’t sing in school:

No refuge could save the hireling and slave

From the terror of flight or the gloom of the grave,

And the star-spangled banner in triumph doth wave

O’er the land of the free and the home of the brave.

The “hireling and slave” referenced are former black slaves who joined forces with the British during the ill-conceived War of 1812 at the promise of winning their freedom.

“The reality is that there were human beings fighting for freedom with incredible bravery during the War of 1812,” writes Schwarz. “However, ‘The Star-Spangled Banner’ glorifies America’s ‘triumph’ over them — and then turns that reality completely upside down, transforming their killers into the courageous freedom fighters.”

“Maybe it’s all ancient, meaningless history,” he continues. “Or maybe it’s not, and Kaepernick is right, and we really need a new national anthem.”

A good place to look might be American Folk legend Woody Guthrie’s “This Land is Your Land” which presents an egalitarian take on the American dream. Guthrie wrote the song out of disgust at another sycophantic patriotic melody that saturated the airwaves during the depression-era, “God Bless America.”

The role of the famous black athlete has been a polarizing one for as long as sports have dominated American headlines, going all the way back a century to when Jack Johnson beat white boxer Jim Jeffries in 1910. During Johnson's time, he was regarded as a "bad nigger," not only because he was articulate and handsome, but also because he beat his white rivals. It was a direct representation of black masculinity as a threat to white supremacy. In recent times, however, this kind of resistance has evolved. From track and field medal winners Tommie Smith and John Carlos raising their fists as a Black Power salute at the 1968 Olympics to WNBA players wearing Black Lives Matter T-shirts, black athletes are expanding their sportsmanship into political activism.

While black men only make up six percent of the American population, they comprise a staggering seventy percent of NFL rosters. However, their power is mainly found on the field, since there are currently no African-Americans who are a majority owner of any team and no African-American CEOs or Presidents. The majority of NFL players are black, while the NFL fan base is 83 percent white and 64 percent male. These are people who pay staggering amounts of money to watch black men who have their bodies battered on the field. As long as they run and tackle, keep their helmets on, and their mouths shut, then they are acceptable to the white mainstream public. However, when black athletes choose to point their aggression not towards each other but to larger, systematic inequalities, that's when the backlash begins.

History aside, speculation has begun to swirl about the future, mainly will other NFL players join Kaepernick. Myke Tavarres, rookie linebacker for the Philadelphia Eagles told ESPN he plans to remain seated during the national anthem ceremony when the Eagles play the Giants on Thursday night.

“This is a risky move by Tavarres who is fighting for one of the limited spots of the team,” writes Matt Vasilogambros at the Atlantic. “But as he put to ESPN, he’s ‘got nothing to lose,’ since he hasn’t signed any major contract or endorsement deal. Kaepernick, on the other hand, has a six-year, $114 million contract. What is at stake, Tavarres says, is his pride as a black man.

While Tavarres is the only football player to come out and join Kaepernick in protest, more athletes could join.”

Whether or not more athletes join Kaepernick in refusing to stand, the quarterback who completed 59 percent of his passes last year, hit the mark this season with his act of dissent, setting off a raging debate on patriotism and freedom in country plagued by police brutality. Taking the long view, Kaepernick’s refusal to remain silent while Black people are gunned down in the streets may come to be widely accepted as quite reasonable compared to the angry denunciations from his critics. After all, heavyweight boxing champion Mohammed Ali was widely vilified for refusing to be inducted into the military during the Vietnam War, only to be warmly eulogized following his death this year by everyone from President Obama to Donald Trump.